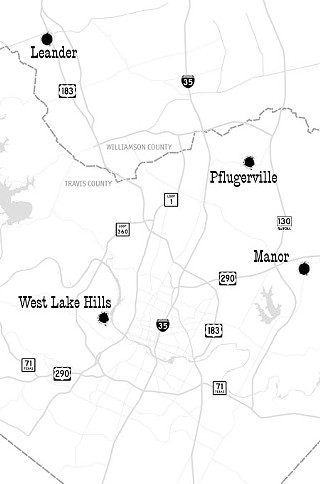 After a split vote on three bond proposals, it looks like the city of Pflugerville is big on bookworms but not so hot on hitting the gym or having a new city hall. Voters rejected Prop. 1 ($11 million for a city hall, allowing staff to move out of the converted doctor's office it currently uses) 54% to 46%, and Prop. 2 ($16 million for a new recreational center) 61% to 39%, but approved the $7 million in Prop. 3 for a library extension by almost the same ratio – 59% to 41%.

Legislative election handicappers don't normally pay much attention to ISD races, but in Lean­der, Place 7 incumbent Pam Waggoner's surprise defeat by challenger Will Streit may raise some eyebrows. Why the interest? Waggoner's the Republican candidate hoping to dislodge state Rep. Donna Howard from House District 48 in Novem­ber. She held a slim lead in early voting, but after her bad showing on election day, Streit stormed ahead to 50.2% and a 10-point margin.

In the bitter and strange West Lake Hills mayoral race (see West Lake Follies: Attraction and repulsion, May 9), local Wastewater Commission Chair Dave Claunch swept past former Mayor Dwight Thompson (who had wanted to come back for one more term after being kicked out in 2006), with a resounding 67% to 33%. "I think voters responded well to my positive campaign about what I can do for the city," said Claunch, adding that he hoped to end years of acrimonious council politics. In third place was incumbent Mayor Mark Urdahl, with one (count it) vote – which was actually more than he wanted. After filing, he had tried unsuccessfully to get off the ballot, and so hit the stump for Claunch instead. Claunch said he does not know who the one voter was, but said Urdahl promises it wasn't him.

Manor ISD voters will have another chance to fill three at-large positions on their board of trustees after a goof on the ballot meant the district had to pull the entire race and start over. Voters should have been able to choose up to three candidates, but an error in the instructions told them they could only pick up to two. The mistake was not caught until after early voting began, so after the district took legal advice, it was decided there will have to be a June 14 do-over, with early voting beginning on June 2.