Place 1: A Clear Victory for Leffingwell

Meeker's anti-Wal-Mart cred fails to bring in the votes 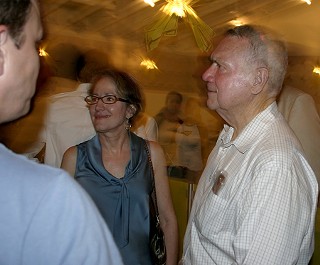 From the moment Jason Meeker declared his candidacy for City Council Place 1, he admitted he would need to take it beyond anger over Wal-Mart. A study of the voting returns shows he failed to do that. The challenge to incumbent Lee Leffingwell by the former Responsible Growth for Northcross spokesman got smashed Saturday night like a certain Northwest Austin mall beneath a Lincoln Property bulldozer: Leffingwell cruised to a second term – and a possible mayoral candidacy? – with 68% of the vote, far ahead of Meeker's 23% and political newcomer Allen Demling's 10%.

The top vote-producing precincts for Meeker were mostly clustered around Northcross Mall, and even among those, the only one he actually won was Precinct 241, where he lives and serves as Democratic precinct chair.

"I think that when you're an incumbent running for re-election, it's always a referendum on what you've done in your first term, and I think the voters have said they're familiar with my record, they know what I did and what I haven't done, and they're satisfied with my record at this point," said a typically low-key Leffingwell at his victory party at Zocalo Cafe in West Austin. "I'm very grateful to the voters of Austin for that." Leffingwell declined to comment on Meeker's challenge: "As my mother said, if you can't say something good about it, don't say anything at all."

"I'm going to continue my work on environmental issues, particularly energy and water conservation, and water quality of course," Leffingwell said of his second-term priorities, while his closest council ally, Mike Martinez, celebrated nearby. "I'm going to be focused a lot on recycling and solid-waste stream reduction, and ultimately, I'm going to be focused on the 800-pound gorilla in the room, and that's land-use and transportation issues."

As for his rumored mayoral ambitions: "I certainly haven't made any decision about that right now, and I won't be making that decision for some time," he said. "I'm very flattered that some people would consider my name as a possibility, and I'll be thinking more about it in the coming months, and I'll make a decision at the appropriate time. A lot of things have to fall into place to even consider doing something like that."

As his results-watching party at the Mangia Chicago Stuffed Pizza on Mesa Drive wound down, Meeker offered congratulations to Leffingwell and defended his run for office. "We got into the race late," Meeker reflected. "That has to be an obvious factor. Most people got into the race in November, and I got into the race in, gosh, February. And so that, and the factor of Nancy Williams, Lee Leffingwell's executive assistant, is really, really well-coordinated in the Democratic Party. ... The predisposition to support Lee was already there."

Meeker also noted Leffingwell's incumbency and fundraising advantage and said, "Given the time that I was in the race and the money that I had, my race did take off. ... I got more support in sheer votes – even though his field was crowded for Place 4 – than the person the Statesman endorsed, Robin Cravey. That's amazing, and Robin has amazing experience, and I don't have nearly the résumé he has."

Meeker said he'll likely stay engaged in civic affairs, but it was too early after the election to say how. "For right now, Laura Morrison is going to need our support to win [the Place 4 run-off] against Cid Galindo."