Maurice Pierce was arrested by Austin Police just after midnight May 3, on an outstanding warrant from Collin County, where he is charged with aggravated assault on a police officer in connection with an April 16 traffic stop.

Pierce was one of three men charged with the infamous 1991 yogurt shop murders and spent 3½ years in Travis County Jail before District Attorney Ronnie Earle dismissed the charges against him in 2003, saying the state lacked evidence to prosecute.

In the pending case, Pierce was pulled over in April by Plano cops, who say he was speeding. Once he was stopped, however, they allegedly learned that he was wanted on an outstanding warrant out of Irving. Instead of complying with officers, Pierce allegedly sped off, injuring one of the officers in the process. Austin Police got word of the warrant, for first-degree felony assault, and suspected Pierce might be on his way to Austin, said APD Cmdr. Sean Mannix. Because of the severity of the charge, APD alerted the Lone Star Fugitive Task Force – which includes not only local cops but also federal marshals – which tracked Pierce to his sister's house in North Austin. Officials arrived at the house late Thursday night, found Pierce hiding in a closet, and, after scuffling with their suspect – Man­nix said police had to use a Taser to gain control – took Pierce into custody around 1am.

Pierce's family argues that the police used excessive force with Pierce: They swarmed the home and entered without announcing their presence, startling Pierce's sister, Renee Reyna, who walked into her living room carrying a toddler, only to find that she was surrounded by police pointing guns at her. She and the rest of her family were ordered out of the house while police looked for Maurice. When they brought him out of the house, he was bruised and bloodied. Officials told Reyna's family that police struck Pierce several times with multiple Tasers; Pierce said that he was kicked and punched multiple times by at least one officer while still inside the house and after he was taken into custody. More­over, Pierce disputes the account of the Collin Co. officers who issued the warrant for his arrest. According to his family, Pierce, who has been living in the Dallas area with his wife and daughter since his release from jail, was pulled over in April and was told he was being arrested but was not given a reason. He panicked and fled the scene – but Pierce insists he did not injure any officer and says the incident should have been recorded by police cameras, according to Reyna.

On May 4, according to the Travis Co. Sher­iff's Office, Pierce was transported back to Collin Co. to face the charges against him. 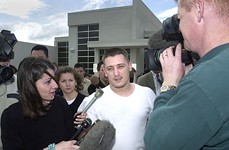 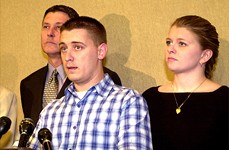