Tweet
print
write a letter
• AISD Superintendent Pat Forgione, anticipating the possible closure of Johnston High School next year under state sanctions, met with the members of the Eastside community on Tuesday night to urge them to help him create a new vision for the school. Over the next 45 days, AISD will be drafting a plan for an alternative at Johnston. That deadline is firm, because by June 15, Education Commissioner Robert Scott should have test scores in hand to make the decision about whether the school is rated "acceptable" or "low performing." A low-performance rating could lead to closure or the replacement of school district personnel with a nonprofit management team. Forgione would prefer to see the Texas Education Agency accept his plan and allow the district to continue to have oversight of the campus. – Kimberly Reeves

• Council Member Mike Martinez is spotlighting the city's role in reducing disparities between the Hispanic population and other Austinites by bringing a resolution to establish a Hispanic Quality of Life Initiative before council on May 8. If adopted, it would instruct the city manager to research a community scorecard from which to build programs to serve the 460,000 Hispanics living in the greater Austin area. Martinez modeled the initiative on the city's African American Quality of Life program, launched in 2005 to improve conditions for the city's African-Americans by a series of metrics, including economic development, health, and neighborhood sustainability. Thursday will be a big day for Martinez, who is also bringing his new streamlined billboard ordinance for public comment and possibly a council vote (see "Billboard Battle Continues," May 2). If passed, the ordinance will introduce mandatory billboard registration and ban mobile billboards pulled by motorized vehicles. – Richard Whittaker

• Ralph the Cactus Planter will get his day in federal court! As we reported in "Naked City," April 18, the converted Oldsmobile '88 in front of the Planet K store on I-35 in San Marcos was cited as a junked vehicle by the city, but store CEO Michael Kleinman said it was art, not trash. Since then, in an unusual move, U.S. District Judge Sam Sparks has reconsidered his own March 7 decision upholding the legitimacy of the original citation. In his new opinion, issued April 30, Sparks said there were First Amendment issues to be addressed and allowed artists Scott Wade and John "Furly" Travis to be added as plaintiffs. He also rejected San Marcos' motion to dismiss, calling some of the city's behavior before his court "a stunning display of deadpan effrontery." Sparks will hear the case on May 30. Ralph (weighing more than a ton, with all fluids removed, the doors welded shut, and having been filled with soil and painted) is not expected to be in attendance. – R.W. 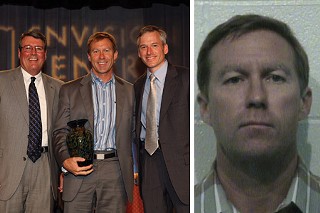 • What a difference a day makes! One day after his sleepover in the William­son Co. Jail, state Rep. Mike Krusee, R-Round Rock, picked up the prestigious Pioneer award at an Envision Central Texas luncheon May 2. The group's annual Community Stewardship Awards fling honored the lawmaker and onetime toll-road kingmaker for having "left familiar territory and taken a different path that reflects the ECT vision." Well, the path to jail wasn't what ECT had in mind, but if Krusee (shown above, award in hand, with Georgetown officials) had already realized his ambitious dream of a commuter rail system between Austin and his hometown of Round Rock, he might have avoided a DWI charge late the night of April 30. DPS officers say they spotted him behind the wheel of his BMW, swerving between lanes on the U.S. 183 frontage road. On a sober note, the Chronicle's Katherine Gregor, a finalist for the Raising Public Awareness award, lost to KLRU TV's popular Downtown series. – Amy Smith

• Development team proposals are in for the major Downtown redo of the Green Water Treatment Plant site. Now begins council's unnecessarily fast-tracked process to culminate in a June 19 selection (for more on the fast-tracking, see "Developing Stories," March 7). Between May 12 and 28, council has scheduled up to five meetings for public presentations. It won't help that Assistant City Manager Laura Huffman is leaving the city May 16 (for the Nature Conservancy of Texas). So the question is: Which community values do we prize most on our citizen-owned land? The fancy plaza offered up by the Forest City team? The practical HEB proposed by the folks from Stratus Properties? The assisted senior living included by those at Trammell Crow? The solar-power generation promised by the Simmons Vedder Partners team? The community emphasis of Catellus Development? No one has asked Austinites. The city can still correct its steering by inserting an initial master-planning phase. The community deserves to be meaningfully involved in shaping this project, before one developer's scheme gets set in concrete. Thankfully, that's what at least two of the most sophisticated master developers – Forest City and Catellus – have recommended to the city. May the city take heed. – Katherine Gregor

• The Austin Board of Realtors has launched an advertising misinformation campaign to undermine a new energy-efficiency policy for homes proposed by the Austin City Council – a policy they are simultaneously helping to design. On an innocuous-sounding new website, www.keepaustinaffordable.org – supported by a radio ad campaign – the Realtors make untrue, alarmist statements designed to turn public sentiment against minimal required upgrades for energy-wasting homes, probably at the time of sale. In Decem­ber, in support of the Austin Climate Protection Plan, council established a task force to start developing "an ordinance relating to energy efficiency upgrades and retrofits." That 28-member task force – on which Realtors have many seats at the table – has just begun meeting, according to Matt Watson of Mayor Will Wynn's office. No recommendations have yet been developed or even discussed in detail by the task force. But in a glaring display of bad faith, the board and the Texas Association of Realtors Political Action Committee (which has admitted paying for the campaign) are already working to subvert the process. Typical of the extensive misinformation on the website: "The Austin City Council is considering a plan that would make it even more costly to live in Austin, preventing many Austin residents from ever being able to sell their home or buy another within the city limits." Note: These are the same guys who tell you you'll never sell your house unless you remodel your kitchen. – K.G.

• In a bittersweet turn of events, the Central Texas Justices of the Peace and Constables Association named controversial Williamson County Constable Gary Griffin their Constable of the Year at the April 30 meeting in Rockdale, just over a month after lotto-millionaire Robert Chody defeated him in the March 4 primary. "It is ... ironic," Griffin acknowledged to the Chronicle. "I am extremely honored that the association recognized all the hard work I've put in over the years as constable." Griffin's work ethic is what won him the award, but as most constables probably know, Griffin has gone beyond the call of duty to protect, as well as serve, the office of constable itself – by paying $70,000 of his own money to fund a lawsuit against the Williamson Co. Commissioners Court for cutting his constable's budget midyear, which the suit claimed was unconstitutional. Griffin also publicly denounced WilCo District Attorney John Bradley's position (published on the Texas District & County Attorneys Association website) that constables should be abolished in Texas altogether. Was the association, having the motto, "Together we stand, divided we fall," aware of the anti-constable perspective still afoot and Griffin's part in battling it? "Yes, we are. We have supported legislation to keep constables in the office," an association rep said. – Patricia J. Ruland