These city of Austin projects are either ongoing or in development: 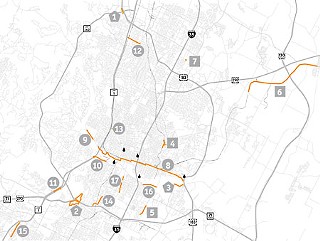 Construction of a shared-use bike and pedestrian path to allow for travel from Jollyville Road, across Loop 360, to the Arboretum area.

Link the Lance Armstrong Bikeway to a bike and ped path connecting the Montopolis Youth Sports Complex and the Colorado River State Park, via the U.S. 183 truss bridge.

Extend the trail from East 12th north to I-35 and the Hancock Center.

Create a route from the Lady Bird Lake Hike and Bike Trail at Lakeshore Boulevard south to Burleson Road. Consists of a mixed-use, off-road path from Oltorf to Burleson. Phase I, adding bike lanes from Lakeshore to Oltorf, has been completed.

6) Austin to Manor Rail With Trail

A 4.5-mile trail in the Capital Metro right-of-way from Daffon Lane to the city of Manor. $2 million has been budgeted for a preliminary engineering and enviro study for the extent of the trail. The rest of the trail will be completed when funding becomes available.

Construction of a mixed-use trail, including a bridge across Little Walnut Creek, connecting Park Plaza and Furness Drive.

With parts of the bikeway already completed, the ultimate product will feature an east-west crosstown bikeway from Veterans Way at Lake Austin Boulevard to the U.S. 183 truss bridge. Cyclists have questioned why this project has taken so long to complete and point out that the I-35 crossover is still a danger zone.

Improve bicycle lanes from Exposition Boulevard to Red Bud Trail, with curb construction along the north side.

Build a "hanging bridge" over Barton Creek, south of Loop 360.

A $340,000 federal grant, with matching city dollars, will go toward construction of showers and lockers at five city-owned sites.