• Brakes slammed all over town Tuesday, over news that Gov. Rick Perry had tapped his chief of staff, Deidre Delisi, to head the Texas Transportation Commission, over the objections of Austin Sen. Kirk Watson and countless others.

• The Place 1 race borrows a slapstick scene from the Keystone Cops; see "Place 1: Who's on first?"

• The merry month of May brings bicyclists out in force; see "The Return of Bike Month." 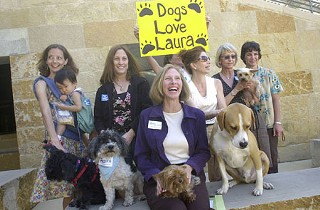 • Bus riders packed the Capital Metro boardroom Mon­day to protest the closure of the Capitol transfer hub and the elimination of the Silver 'Dillo. The state ordered Cap Metro to close the Capitol stop, but though they cited security as the main reason, some speakers insinuated that the move was really more about keeping the unwashed masses away from the front of the Capitol. As evidence of an ulterior motive, speakers pointed to the state's rejection of viable alternatives presented by Cap Metro. "That stop belongs to us," said Susana Almanza of People Organized in Defense of Earth and Her Resources. "I've never seen the governor ride the bus." Cap Metro is also cutting three 'Dillos – including the Silver 'Dillo, which serves the Eastside – to shift resources to the two remaining Central 'Dillos, increasing frequency to five-minute intervals. Some said they see this as a slight to the working poor in an effort to appease tourists and condo-dwellers. The board is expected to vote on the proposed changes in May after a series of follow-up community meetings. – Justin Ward

• Do you care about the future of parks in Austin? Then make your voice heard on Thursday, May 1, at City Hall meetings scheduled to gather community input on the city's next Parks & Recreation Department director. In a welcome move, City Manager Marc Ott has initiated a national search for the position. In a resolution, the Parks board had requested that Ott consider national as well as local candidates and include community input in the hiring process. The leadership of our next director could be critical for Austin, as the city wrestles with growth and development pressures and revisits comprehensive planning. "A great parks system is a key community value, so personally, I think we need someone who can do it justice," said Parks board member Danette Chimenti. "We need somebody with a vision, who will be a strong advocate for parks and green space. With so many things going on in this city, that can easily get lost." At the public meeting, citizens can recommend the desired characteristics, knowledge, and experience they believe the new director should have. Staff will use the input in developing a recruitment profile to attract candidates. Thursday's City Hall meeting times: 4-5:30pm in City Council Chambers; 6-7:30pm in the Boards and Commissions Room. – Katherine Gregor

• The search for a new Austin Independent School District superintendent has begun – but not with a search for actual superintendents. Monday, the AISD board of trustees voted to invite executive recruitment agencies to send in bids to be the lucky firm to help the district's Superintendent Search Process Committee look for a replacement for current Superintendent Pat Forgione. Tenders will be accepted until May 21, and the board hopes to recommend a contractor on June 16: At that point, the district will be actively recruiting its new chief. But don't worry if this seems to be a slow process: Forgione does not retire until June 30, 2009. – Richard Whittaker

• County Clerk Dana DeBeauvoir said she is committed to a point-by-point review of the county's eSlate machines, in the wake of a federal whistle-blower's lawsuit alleging that Hart InterCivic overpromised and underdelivered on the machines. The organization Vote Rescue was on hand at Tuesday's Commissioners Court meeting to provide copies of Hart technician William Singer's lawsuit, which alleges that Hart stretched reports of the performance of the eSlate in Ohio in order to secure its share of the $4 billion set aside in the Help America Vote Act. DeBeauvoir said she's not yet willing to pull the plug on the machines but would if she found significant problems in light of the lawsuit's allegations. Vote Rescue would prefer the county return its machines and choose to count ballots by hand. – Kimberly Reeves

• The Harry Ransom Center at UT has acquired a rare 16th century Bible, the Plantin Polyglot. Center Director Thomas F. Staley called the purchase, paid for by private donations, the center's "single most important rare-book acquisition in the past two decades." Polyglot Bibles were a tool for scholars to compare different texts and translations side-by-side in one volume. While 1,200 copies were printed between 1568 and 1572 in Antwerp, Belgium, by publisher Christopher Plantin for King Philip II of Spain, there is no record of how many remain. The Plantin edition includes four languages: Aramaic, Greek, Hebrew, and Syriac, with translations and commentary in Latin, the standard language of academics of the time. In addition to being a landmark work in the history of textual study of the Bible, the edition is widely regarded as the defining work of one of Europe's greatest printers. Two of the eight volumes will be on display to the public in the Ransom Center lobby until Sunday, May 4. – R.W.

• The U.S. Supreme Court on Monday approved an Indiana law requiring would-be voters to present a photo ID at the polls; a decision that no doubt will encourage efforts for a similar law in Texas in next year's legislative session. In a 6-3 decision, the court ruled that even though there was no evidence of voter impersonation presented, the state's interest in preventing fraud outweighed the burden that such a law would place on citizens. Republicans pushed a similar bill through the Texas House last year, only to have it blocked in the Senate after a rancorous fight. Democrats contend that such a law would impede voting in groups less likely to have a photo ID, such as minorities, women, and the elderly – groups that also tend to vote Democrat. The ruling "is a victory for democracy in our nation, and I'm pleased that the court agreed with the vast majority of Texans who want to protect the sacred American principle of 'one person, one vote,'" said Lt. Gov. David Dewhurst. "With this legal challenge now behind us, I look forward to passing a fair voter ID law in Texas next year that fully protects the voting rights of all U.S. citizens registered to vote in Texas." But Rep. Rafael Anchía, D-Dallas, vowed to continue his fight against it: "Just because an Indiana law is minimally constitutional doesn't mean it's great policy in Texas." – Lee Nichols

• Blaming the biofuel ethanol for skyrocketing food costs, Gov. Rick Perry last week asked Washington for a 50% waiver from the federal Renewable Fuel Standard, which, among other things, mandates the production and use of ethanol made from corn. Perry, in a press release, said the RFS' impact on corn prices is "significantly affecting Texans' family food bill" and devastating the state livestock industry. "There are multiple factors contributing to our skyrocketing grocery prices," Perry said, "but a waiver of RFS levels is the best, quickest way to reduce those costs." In targeting ethanol instead of oil and its rapidly rising prices – which affect oil-dependent food producers and Texas commuters alike – Perry may be throwing the baby out with the bathwater. Ethanol has its drawbacks, but as Russel Smith of the Texas Renewable Energy Industries Association points out, to assume corn ethanol is anything more than a transitional renewable fuel is a mistake, and its use, backed enthusiastically by President George W. Bush, is among the limited factors offsetting the United States' dangerous foreign-oil addiction. The RFS includes benchmarks for nonfood ethanol production, and just this week, UT researchers announced a noncrop biofuel production breakthrough. With oil prices expected to keep increasing and, as Bush noted this week, worldwide oil demand "rising faster than supply" (peak oil anyone?), Perry seems to ignore the greater economic peril of Texas' ever-growing auto dependence, which he's done little to mitigate. – Daniel Mottola 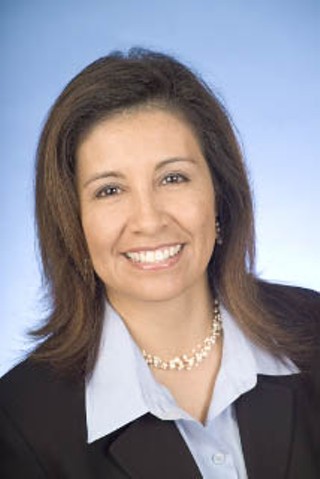 • Diana Maldonado, the Democratic nominee for House District 52, has become the first candidate to be endorsed by the TexBlog PAC. The political action committee, whose board includes publishers and writers from leading Texas political blogs including Burnt Orange Report, Off the Kuff, and Dos Centavos, plans to endorse five candidates – the number the Democrats needed to take back the House in November. Maldonado hopes to fill the Williamson County seat left empty by outgoing Republican Mike Krusee; she faces Republican (and ex-staffer to former Republican U.S. Rep. Larry Combest) Bryan Daniel and Libertarian Lillian Simmons in the election. "Texas' progressive bloggers decided to put our money where our mouse is," said Capitol Annex owner and TexBlog board member Vince Leibowitz. Handily for Maldonado, the endorsement comes with a $5,000 check and "massive online outreach." – R.W.

• Creationist education in Texas took a blow, as Dallas-based fundamentalist school the Institute for Creation Research has failed to get degree-granting powers. The school, which teaches the Bible as literal scientific truth, wanted to provide a master's degree in science education for "quality-trained science educators who can teach in those private schools that select or invite a creation science perspective." But in its April 24 meeting, the Texas Higher Education Coordinating Board denied the request because the proposed course failed to reach board standards. It based its decision on Section 61.301 of the Texas Education Code, dealing with the state's responsibility when it comes to "fraudulent or substandard college and university degrees," and the sections of the board's own standards demanding that a course reflect "the breadth of knowledge of the discipline taught." The institute called this "a blow to academic freedom," and the Christian conservative Houston Area Pastor Council said, "It's time to take this issue seriously or admit that we don't care whether our children, our society, and our nation are trained and dominated by baal." – R.W.