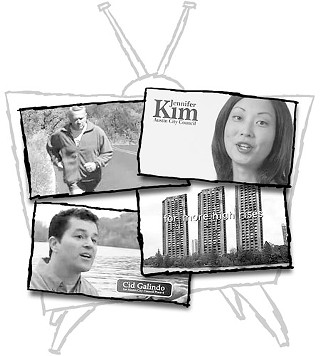 With council candidates' TV commercials airing in earnest as of last weekend, the Chronicle grades them on their merits, "artistic" and otherwise.

Cid Galindo: Expanding on the ad he's been running for more than a month, Galindo's clip now trumpets "The Galindo Plan," directing viewers to his website to read up on his congestion-clearing proposal for town centers scattered along the SH 130 corridor. Unremarkable but sticks to the issues.

Lee Leffingwell: The Place 1 incumbent steers clear of specifics, preferring to highlight his Austin connections while jogging along the hike and bike trail. "We've got a lot to be thankful for here, but we've also got a big responsibility, because the future of this city is just too important to be left to chance" is as heated as it gets. An homáge to David Lynch's The Straight Story?

Jennifer Kim: She "opposed tax giveaways to corporate shopping malls!" She "voted against all the toll roads!" Featuring talking heads and a blank background, Kim focuses solely on the issues. She highlights her refusal to accept the council pay raise – which she's getting aired-out for in Rick Culleton's pro-Jason Meeker ad. Her "I'm sure not perfect" closing line seems a little forced. If anyone's capable of thinking she's perfect, it's Kim!

Randi Shade: Claiming that "we need an attitude adjustment at City Hall," this clip shows Shade waiting in line at the Alamo Drafthouse, restaurants, and the airport, underscoring Kim's airport security snafu last year. "I'll wait in line with you at the airport," ain't exactly "Change we can believe in," or "Morning in America."

Laura Morrison: This clip has generated some controversy for Morrison's statement that the city is "rushing to sell the last 5 acres of prime city land on Lady Bird Lake to build more high rises," accompanied by a trio of bombed-out towers you'd call the Beirut Arms. For neighborhood lovers, it's akin to the Republicans (or Hillary, for that matter) putting Osama in an ad.

Jason Meeker & Randi Shade: Where to begin? This unsolicited ad from Meeker supporter Rick Culleton slams Leffingwell over the Las Manitas fund, but neglects to mention he voted against the loan, and attacks Kim for increasing council pay without mentioning she refused the raise. This ad plays fast and loose with the facts. Plus, tying Shade to Meeker does the former more harm than the latter good.

See more with Laura Morrison on her campaign ad, at the Chronicle election blog, at austinchronicle.com/newsdesk.