The Presidential Contenders on Drugs 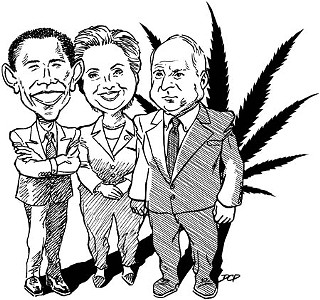 When the next president takes office in January, he, or she, will be the proud new parent of two outrageously expensive wars: the war in Iraq and the domestic War on Drugs. While the candidates have spent a fair amount of time talking about the first – and how we might (eventually) end it – they have spent embarrassingly little time talking about the several-decades-old drug war.

According to the Congressional Research Service, the cost of the Iraq war now tops $500 billion – a fraction of the tax money that's been spent doing battle at home. The economic cost of the War on Drugs is difficult to estimate: There are the annual toilet-flushing expenditures, like the millions tossed into the ineffective anti-drug media campaign and the millions more sent overseas for ethically and environmentally questionable programs, like coca-crop-spraying Plan Colombia. There are the annual costs associated with incarcerating drug offenders – the only real "plan" of action we have for dealing with what otherwise (and in many other countries) would be considered a public-health concern: According to the Washing­ton, D.C.-based Justice Policy Institute, the annual cost of incarcerating drug offenders in state and federal facilities amounts to a whopping $8 billion per year. Above all, of course, there is the inestimable human cost of the war: Countless families destroyed, not only by substance abuse but by the fallout associated with our collective approach to handling such things – throwing users in jail, branding them criminals, and resigning them to life as second-class citizens, often disenfranchised from the democratic process and quite likely destined for continuing economic struggle.

And you'd be hard-pressed to find a government-approved "program" more shamelessly racist than the drug war: As of July 2007, some 2.2 million Americans were behind bars, and nearly half of them (900,000) were black, reports the nonprofit Sentencing Project. The startling increase in the number of incarcerated citizens – up 500% since the 1970s – has been driven by the number of individuals locked up on drug charges. Even though whites and blacks use and sell drugs at a similar rate, in 2003 twice as many blacks were locked up on drug offenses – blacks made up roughly 13% of the total U.S. population but accounted for 53% of drug offenders sent to state prisons that year, the JPI reports. Even in "liberal" Austin the numbers are staggering: According to JPI, in Travis Co. blacks are 31 times more likely than whites to be incarcerated on drug charges.

Given the sobering reality of the federal drug strategy, one would think our presidential candidates – Democratic Sens. Barack Obama and Hillary Clinton and GOP Sen. John McCain – might see fit to spend at least a smidgen of their seemingly endless time on the stump addressing this issue, if not actually mustering the courage to speak the truth, however unpopular it might be (rather than simply assuming the citizenry too addled to comprehend the difference between being smart about drug policy and being "soft on crime" – which is the aggravatingly myopic approach to which we've been subjected for years).

To date, this election season has been no different than others regarding candidates' public positions on drug-war policies. That said, there are some bright spots – although until recently, ferreting out where the candidates actually stand hasn't been easy. Thanks to the Sentencing Project (and other online sources), voters can now see where the candidates stand on a handful of drug-war issues. For a March report, the project combed through candidate speeches and other public comments compiling a list of candidate platforms on various criminal justice policies. Among the highlights:

On mandatory minimum sentencing: In 2003, Obama said he would "vote to abolish" all mandatory minimums; in February, however, he'd hedged, telling the National Association for the Advancement of Colored People in a candidate questionnaire that he's aware "every leading expert body in criminal justice" opposes the use of man-min sentences and that if elected he would "immediately review these sentences to see where we can be smarter on crime and reduce the ineffective warehousing of nonviolent drug offenders." Clinton, meanwhile, appears to be straddling the fence on the issue; in the same questionnaire, she responded that man-mins are "appropriate" for certain violent crimes but have been applied "too broadly in ways that are simply unfair to minority offenders." So far, it would appear McCain is still on the man-min train, telling Project Vote Smart in 2004 that he supports man-min sentences for "selling illegal drugs."

On the overall approach to the War on Drugs: Clinton and Obama have said they support diversionary drug court programs; Obama also wants more focus on prevention. Asked by Politico.com how he would deal with Washington, D.C.'s high HIV infection rate, Obama replied that needle-exchange may be one solution. McCain, for his part, acknowledges that too many first-timers go to prison.

On the crack-to-powder-cocaine sentencing disparity: Obama would eliminate the disparity by dropping penalties for crack, equalizing them with those for powder-coke offenses. He's co-sponsoring legislation to do just that. He also favors making sentencing changes retroactive, which would benefit inmates sentenced under previously draconian policies. Clinton initially supported lowering, but not eliminating, the crack-to-powder disparity but has recently come around to join the pending equalization legislation; she opposes retroactivity. McCain has remained mum. For more details, go to www.sentencingproject.org.

This Bud's for You

U.S. Reps. Barney Frank, D-Mass., and Texas' own Liber­pub­lican Ron Paul, R-Surfside, joined forces recently on legislation aimed at taming the federal law enforcement war on pot. Frank introduced House Resolution 5843, the first pot-decriminalization measure introduced in Congress in 24 years, which would remove from federal law the possibility of arrest, prosecution, and jail for "responsible" adult tokers and would eliminate penalties for possession of up to 3.5 ounces. Frank and Paul also filed the Medical Marijuana Patient Protection Act, which (again) seeks to end federal raids on medi-pot dispensaries and to end the federal harassment of ill patients who use the drug in compliance with state laws.