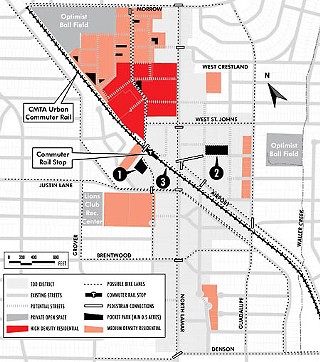 1 and 2 show proposed locations for pocket parks; council has asked staff to draft commitments to acquire specific tracts of at least a half-acre each. 3 is a recommended Rails With Trails hike-and-bike trail, along the Capital Metro rail line. In addition to maintaining the commitment to 25% affordable housing, council asked for all three SAPs to be returned with more specific parks and trail acquisition plans.

City Council members are currently hanging tough on their 25% affordable housing goal for transit-oriented develop­ment districts. That's good news for Austinites who want to keep central-city homes reasonably affordable for average working folks and lower-income families. Council's policy for TODs is worth monitoring, in part because it provides a good barometer of council's commitment to affordable housing citywide.

Last Thursday, council unanimously approved (on first reading) adoption of a third TOD station area plan and its TOD base district zoning. But members returned all three SAPs to staff with significant amendments – prepared in advance and sponsored by Brewster McCracken. Co-spon­soring the first two was Mike Martinez; with McCracken off the dais last Thurs­day, the third SAP was sponsored by Sheryl Cole and co-sponsored by Jennifer Kim, demonstrating broad-based council support. In short, council issued this policy directive to staff: "Figure out how to get 25% affordable housing done."

The first three station areas being planned (for districts around three stops on the new Capital Metro Red Line commuter rail) are: 1) Plaza Saltillo, 2) MLK on the Eastside, and 3) Lamar/Justin Lane in Northwest Austin. Staff had recommended requiring that only 10% of new units meet affordability standards. That's the percentage that market data suggests is feasible for private developers to underwrite; in exchange, developer/landowners can earn density and height bonuses. (Under current city standards, affordability is designated as 60% of median family income for rentals and 80% of MFI for for-sale units.)

But the original council policy for TODs established a 25% affordable housing goal. That leaves a gap of 15% – the portion over and above what private developers can afford to subsidize. Particularly in the Eastside TODs, where recent appreciation has been fierce, yet many incomes remain poverty-level, there's a huge gap between what the average new home costs and what a household at 80% (owner-occupied) or 60% (rental) of median family income can afford. According to a review by consultant Diana McIver & Associates: "Required per-unit subsidies for homeownership units ranged from $83,131 to $149,951 per unit, depending on the TOD. Required subsidies for rental units ranged from $75,870 per unit in the Lamar TOD to $127,623 per unit in the Saltillo and MLK TODs." (DMA will be doing additional analysis to more accurately put a price tag on the 15% gap for each station area.) It's a big number. For an estimated 1,300 or so affordable units in all three TODs (25% of total housing units), at a ballpark subsidy of $100,000 per unit, the total financing gap translates to around $130 million. Funding that will require creativity, expertise, and political will.

In its March 25 action, the Planning Commission unanimously voted to "strongly recommend that the city council establish a clear and firm plan to help developers achieve the 25% affordability goal." If they fail to do so, redevelopment may not occur, or developers may opt to forego the density and height bonuses. Since council wants to see increased density in these areas, it behooves the city to clearly show developers (and neighborhoods and voters) a workable plan for subsidizing 25% of all new units. Developers would only be liable for subsidizing the first 10%.

A study by Kathleen Kane-Willis at Roosevelt University notes: "Constructing any type of affordable housing requires numerous subsidies. It is not unusual for a developer to utilize more than seven different sources of funding – sometimes referred as the 'layered' or 'lasagna' method of completing financing of a project. This layering of subsidies is common in affordable housing and necessary to close the financing gap. Most developers currently combine federal money disbursed through local and state governments, a housing block grant program (HOME), and the Low Income Housing Tax Credit (LIHTC)."

Based on interviews with city staff, city consultants, community advocates, and council members, no one has yet devised the winning recipe for our local deep-dish lasagna. While a 25% affordable housing goal is being met at Mueller, that's on city-owned land; Austin is striking out into virgin territory trying to achieve the same goal on privately owned land (dozens of separate parcels) in each transit-oriented district. On the city's side, a likely source of subsidies is the affordable housing bond money approved by voters. Staffers are determining exactly how much of the $55 million approved remains unallocated and available for TODs. Council also amended the draft SAPs to direct that staff create tax-increment financing within the districts "to fund public responsibilities." Possibly those commitments could include affordable housing subsidies. Both the Plaza Saltillo and MLK station areas are within the Homestead Preservation District; there, a special TIF for affordable housing is an option (but only a single TIF is viable).

What's encouraging is that council is pushing everyone to get creative, by reasserting its aggressive 25% goal. Given the staff recommendations, it would have been easy for council to say, "Whoops, too hard!" McCracken & Co. added other well-considered amendments as well – to implement parkland acquisitions, coordinate utility improvements, create sustainable landscape standards, and address other issues (some forwarded by the Planning Commission). McCracken said he particularly wanted to ensure that specific parcels are identified upfront for new neighborhood pocket parks (and not upzoned, which would increase the city's acquisition costs). He's also advocating that sustainable landscaping standards (use of native species, etc.) be required to earn density bonuses; those are likely to follow the national Sustainable Sites Initiative being developed by the Lady Bird Johnson Wildflower Center in partnership with the American Society of Landscape Architects and the United States Botanic Garden.

Now the ball is back in staff's court. Addressing these detailed council directives will require coordinated input from high-level staff in multiple city departments, which will take at least a month. Look for the next draft of the station area plans to return to council on May 22, or soon thereafter.