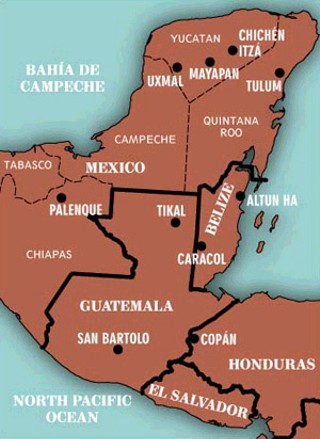 The Maya first began establishing their own artistic, linguistic, and religious identities some 2,000 years before the birth of Christ, but they're best known for their spectacular cities that dotted the present-day countries of Mexico, Guatemala, Belize, and Honduras during what is known as their Classic Period, about AD250 to 900.

During this time, the Maya built many of the spectacular temples at city-sites like Palenque, Mexico, and Tikal, Guatemala, that are now popular tourist attractions. Their populations, regionwide, numbered in the low millions, with estimates of 100,000-200,000 or more living in some of the larger autonomous city-states. They achieved astounding levels of skill in the fields of astronomy, architecture, agriculture, and mathematics. (The Maya – and probably other Mesoamerican people in the area before them – were among the first cultures to use zeros, second only to the Mesopo­tam­ians.) The Maya wrote histories and accounts of ruling life on their monuments with hieroglyphs, but they also produced thousands of books written on bark paper – and burned by the Spanish in the 1500s.

It is now known that the Maya were a warlike people that – although not always as bloodthirsty as those portrayed in Mel Gibson's Apocalypto – are known to have included sacrifice in their war activities and religious ceremonies. Equally bloody, but not fatal, was a ceremonial practice of kings and other elites of cutting their penises with stingray spines or obsidian (and their female counterparts puncturing their tongues with roped thorns) to let blood onto paper in a bowl, which was then burned to create a rising smoke serpent, as a connection with their ancestors.

The popular destination of Chichén Itzá, in the Yucatán, became a center of political power around AD900, after many Maya mysteriously abandoned their temples and other centers of religious and ceremonial life in Chiapas and Guatemala. After a civil war of sorts between ruling lords in the Yucatán, the Maya shifted their "capital" to Mayapán, south of Mérida, around AD1200. Around 1441, more warfare thrust the Maya into chaotic political divisions, which continued until the Spanish conquistadors arrived in 1519 and defeated warring leaders around 1541. The Spanish, however, were forced to put down numerous Maya rebellions throughout the centuries leading to the independence movements of Central American countries, and rebellion was in the news as recently as the 1990s, with the Zapatista movement in Chiapas.

Today, the Maya number more than 10 million and speak 30 recognized Mayan languages, which are categorized into 12 major groups. Like many indigenous peoples in Latin America, they have been marginalized, disenfranchised, and outright killed, particularly in the brutal Guate­malan Civil War that raged from 1960 to 1996, and included the slaughter of hundreds of thousands of Maya.