The latest line on streetcars 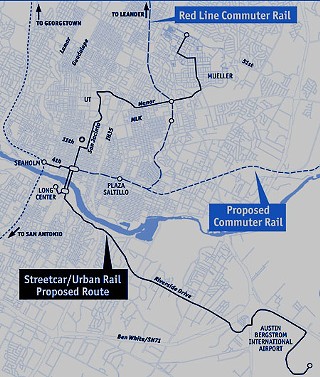 On Tuesday night, the city sponsored a public workshop seeking citizen input on the details of designing a new streetcar system – also called ultralight rail transit – to serve Downtown and Central Austin. Alternately, the city could choose a more expensive light-rail system that would allow for greater future capacity.

Urban design consultant ROMA Austin presented a recommended alignment; Council Member Brewster McCracken answered questions during the public discussion. The line proposed would serve the "big three" critical to future urban mobility: Downtown destinations, the state Capitol complex, and the UT campus. In addition, streetcar service would extend to the airport and to Mueller. An extra Downtown spur could link Seaholm to the Long Center across Lady Bird Lake and perhaps extend out to Zilker Park.

Now is the time for public input to shape a major transit project that the city and/or Capital Metro hope to put before voters in November. Council recently authorized ROMA to review and make recommendations for the streetcar route, alignment, technology, and projected costs as an extension of its work on the Downtown Austin Plan. The immediate project proposed will be a starter line, deferring for now any discussion on how a complete citywide system might look and work 40 years hence. But ROMA did show how the streetcar could connect to the regional/commuter rail transit north to Leander (the Red Line, nearing completion), out east to Elgin (proposed), and south to San Antonio (proposed).

At the workshop, the public weighed in on key points: favoring dedicated lanes over in-traffic service (to maintain traffic flow); costs (probably $20 million to $30 million per mile for ultralight rail; by contrast, a new highway costs $70 million to $90 million per mile); financing (the city wants to get it done with no new taxes); the best technology (light vs. ultralight); and exactly where the line should run. A light-rail system with dedicated transit lanes is seen as an easier "sell" in car-loving Central Texas because it would only minimally affect vehicle traffic. But the public needs to understand that building a dedicated-lane system will cost more. Dedicated lanes entail extra expenses such as moving curbs and gutters, widening bridges, and perhaps adding sidewalks. The heavier light-rail technology requires digging deeper footings, which in turn drives up the costs to move utility lines. An ultralight system that runs in traffic (like the Portland Streetcar) is less costly but provides less capacity. One hybrid solution being explored: ultralight streetcar vehicles running on light rails in the ground.

The city needs to move quickly on a comprehensive project proposal to present to the Transit Working Group of the Capital Area Metropolitan Planning Organization. After incorporating public feedback, ROMA will make a presentation to City Council May 8 and to the CAMPO group May 12. The ambitious goal is to take the project to the full CAMPO board for approval (or not) by June. Project champions Will Wynn and McCracken wear multiple hats as city of Austin elected officials, CAMPO board members, and Transit Working Group members, which makes the politics tricky; having the proposed system come from ROMA thus provides a degree of third-party objectivity.

Ideas or comments for ROMA and the city? E-mail them by May 1 to jim.robertson@ci.austin.tx.us. For reference, the ROMA presentation will be posted soon to the Downtown page of the city's website. The ROMA map is posted here.

Streetcar: The Work Plan
The wheels are in motion for an urban rail system