Anatomically correct and legal, too! 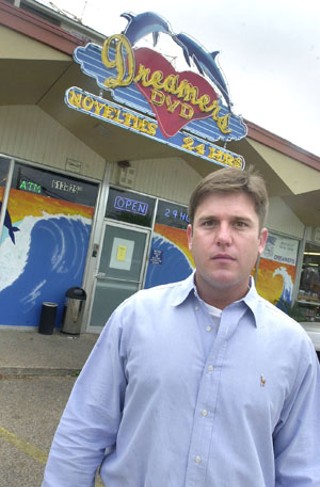 Cloud Richards, general manager of Dreamers, in front of the boutique on West 29th (Photo by John Anderson)

If you walk into the Dreamers boutique at 613 W. 29th today, you'll find the place well-stocked – not only with hundreds of adult films (try On Golden Blonde or Space Nuts) and instructional videos (like Enjoying Guilty Pleasures), but with all manner of toys. You name it; Dreamers has it: The All Amer­ican Whoppers collection, the Butterfly Kiss, and Buzz Bun­ny, holding its upturned bunch of carrots, to name but a few.

It wasn't always so.

Since 1979 it has been illegal to sell, give, lend, distribute, or advertise any item the state considers an "obscene device" – in particular, any anatomically correct sex toy "designed or marketed as useful primarily for the stimulation of human genital organs," reads the Texas Penal Code. According to the state, the law protects our collective morality. But that's not how Austin-based Reliable Consultants Inc. – which owns Le Rouge Boutique and the well-known seven-store chain Dreamers – or the North Carolina-based PHE Inc. (which owns online sex-toy retailer Adam & Eve) see it. To Doug Richards and his son Cloud, Reliable's owner and general manager, respectively, and to PHE CEO Phil Harvey, Texas' sex-toy ban is nothing more than an attempt to define acceptable sexuality (for procreation only – no pleasure here, thank you very much) and a means to police the private sex lives of consenting adults.

But thanks to the Richards, who sued the state (Harvey subsequently intervened) on grounds the toy ban was unconstitutional, things are now different. On Feb. 12, the 5th U.S. Circuit Court of Appeals delivered a firm message to the state of Texas: Free Willie. According to a two-judge majority (of a three-judge panel), the state's sex-toy ban is unconstitutional. The law impermissibly curtails an individual's "right under the Fourteenth Amendment to engage in private intimate conduct in the home without government intrusion," Judge Thomas M. Reavley wrote. "Whatever one might think or believe about the use of these devices, government interference with their personal and private use violates the Constitution."

For years, says Cloud Richards, Dreamers customers have requested a variety of toys, and for years Dreamers employees have had to explain why the store cannot stock them: Retailers could sell generic vibrators as "novelty" items, but by law, a retailer with more than six such devices on hand at any given time would be open to prosecution. The law is enforced, variously, across the state. One of the more notorious examples was the 2003 case against Joanne Webb, the Passion Party maven (a vibrating version of the classic Tupperware party), who was nabbed for selling a dildo to Burleson police posing as a couple in need of a romantic jump-start. (The charges against Webb were eventually dropped.) But it isn't just in small, presumably less sophisticated, communities where these cases pop up – and more often than not, says Richards, it's the clerks at adult-oriented businesses that are nabbed by police.

In recent years, clerks have been arrested in San Antonio, El Paso, and Houston, said Jennifer Kinsley, an attorney for Reliable Consultants. That's what prompted the Richards to bring federal suit in 2004. "They are trying to run a professional business," Kinsley said. "This is not a fly-by-night operation. And they were concerned about having an employee arrested for selling a product that is lawful in 99 percent of the country."

The state maintains that the Texas statute is legal and is now appealing the ruling. The state argues that only an individual can assert a liberty interest and that there is no constitutionally protected right to peddle obscenity. But the Richards and Harvey disagree: Legal precedent (dating to the 1965 Supreme Court decision that lifted the ban on the use of contraceptives) allows businesses to advocate for the individual rights of their customers.

The state's argument is that of "Moral Majority types," said Kinsley: "If we let people" buy these devices, "then the next thing you know, prostitutes will be available on every street corner for sale to [our] children." The "outcome of this case is an enormous victory," she added, not only for individual rights but also "for women's rights." The majority of sex-toy consumers are women, she notes, and the ban on their sale is often seen by those in the industry as "anti-female and anti-enjoyment of sex." (In that way, perhaps it isn't so surprising that Texas would find sex toys obscene; the state hasn't exactly enjoyed a reputation for treating women as competent to control their sexual lives – spending money to "promote" pregnancy yet failing to champion family planning and to provide comprehensive access to reproductive health care.) That makes some sense to Adam & Eve's Harvey, whose career involves both pleasure and planning: In addition to heading the online giant (www.adameve.com), he is also the founder of a nonprofit that provides family planning and HIV-prevention education in 70 countries. Only six states have ever sought to ban sex toys, he notes, and only four still seek to do so: Alabama, Missis­sip­pi, Texas, and Virginia. The "holdouts here," he said, "reflect the anti-sex tenor of opinion" in those states.