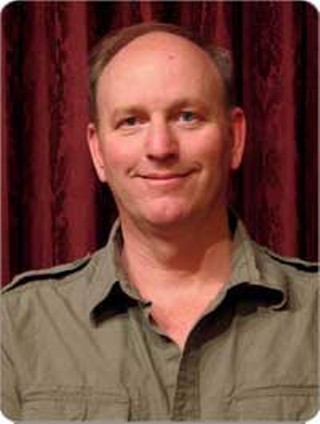 A group of former employees, museum members, and contractors with the Texas Military Forces Museum at Camp Mabry is calling for the immediate firing and criminal prosecution of museum Executive Director Jeff Hunt, who they say threw a "tantrum," destroying a $23,000 Civil War battle diorama built by Arizona high school students that was commissioned by a former museum director.

History teacher Glen Frakes, of Gilbert, Ariz., says his students spent more than three years and thousands of hours building the 5-foot-by-10-foot diorama of the Battle of Palmetto Ranch for the Camp Mabry museum, and Hunt tore the diorama apart, soldier by inches-tall soldier, over the course of a weekend last fall.

Officials at Camp Mabry stand by Hunt's decision to torpedo the diorama – though they say it was "dismantled" and carefully preserved – and cite historical inaccuracy as the reason for its alteration. But Frakes insists that the display was as historically accurate as any "work of art" representing a 100-year-old battle and that his students are heartbroken. "The girls were in tears," Frakes said, when he told his students of the diorama's fate last fall. Frakes says they believe Hunt committed a crime by destroying museum property. "We want to push for a felony conviction of Hunt," he said, "and see him fired from his job." To that end, Frakes and his associates, including the son of the museum's founder and a former director there, must convince Camp Mabry officials that Hunt committed a crime, but they have so far been unsuccessful. Hunt was formerly the curator of the National Museum of the Pacific War in Fredericksburg but was "dismissed" in 2006 after nine months in the position for "failure to adhere to agency policy," according to the Texas Historical Commission. He was hired at the Camp Mabry museum in October 2007.

Frakes' group has called on Gov. Rick Per­ry's office to investigate Hunt and has gathered letters of support from two of Arizona's top officials – Republican Sen. John McCain and Democratic Gov. Janet Napolitano. The Camp Mabry brass denies wrongdoing with regard to the diorama, which was appraised at between $60,000 and $130,000. 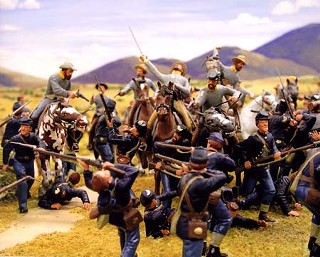 Hundreds of tiny soldiers formed an intricately detailed display of the Battle of Palmetto Ranch, one of the last battles of the Civil War. (Courtesy of Glen Frakes)

"It absolutely was not destroyed," said Col. Bill Meehan, public affairs officer at Camp Mabry. The question of historical accuracy for the battle has turned into a war of words between Frakes and Camp Mabry officials. But before and after photos of the diorama do not appear to show a carefully dismantled display. In a photo taken in January, three months after the diorama was, as Meehan put it, "dismantled," soldiers are seen piled willy-nilly, with bent and broken weaponry, along with at least one headless soldier.

During a visit to Camp Mabry last week, this reporter was shown boxes purportedly containing nearly all 750 of the preserved diorama figurines, as Hunt pulled a few figures out to demonstrate. But examination of the diorama base itself showed several broken hooves where cavalry had been removed, severed below the horses' knees. When asked about the hooves, Hunt said there was no way to maintain total preservation during dismantling: "Taking this apart, did some rifles get bent? Some figures get broken? Sure."

Frakes likened Meehan's "dismantled" claims to breaking a piece of dinnerware. "It's like if I broke a dinner plate and said, 'It's not destroyed; I've got all the pieces.'"

Meehan listed a variety of reasons the diorama was unacceptable, saying it was too large, that a model boat was traveling in the wrong direction, and that the type and placement of soldiers present were incorrect. But Frakes and others calling for Hunt's resignation say the historical inaccuracy is a cover story for what really happened.

Hunt "wrecked the thing first," says Frakes. Museum employees who were with Hunt when he initially saw the diorama have described his reaction as a "tantrum," saying he ranted about how "awful" and "terrible" it was. Then, they say, over an October weekend, Hunt came back to the museum after hours and destroyed it. But Hunt may have destroyed something based on his own life's work – a book on the Battle of Palmetto Ranch, written by one Jeff Hunt, served as Frakes' guide in constructing the diorama. And one of the claims of historical inaccuracy – concerning the type and placement of soldiers on the battlefield – came straight from an error in Hunt's book, according to Frakes, which was inadvertently repeated in the diorama. While Hunt's book, The Last Battle of the Civil War: Palmetto Ranch, claims that the charging forces in the May 1865 battle in South Texas numbered "up to 200," said Frakes, most other accounts he found after the diorama's destruction actually put the number closer to 300.

Frakes says Camp Mabry's other complaints about the display are easily addressed: The diorama was always commissioned at 5 feet by 10 feet, nearly the same size as four other dioramas Frakes and his students created for the museum in the past. As for the boat traveling in the "wrong direction," it is in fact paddling upstream, away from the battle, as any logical captain would have done. It is all a powerful testament to the unknowable aspects of the past, and Frakes says he was never given a chance to right any perceived inaccuracies before the diorama was demolished.

Over the years, Frakes and his students have had dioramas placed all over the country, including in the Smithsonian Museum in Washington, D.C. A 35-year veteran educator, Frakes plans to retire next year and hoped the Battle of Palmetto Ranch would be a high note on which to leave his position. But now, he describes the Palmetto diorama ordeal as "a tragedy, a nightmare."