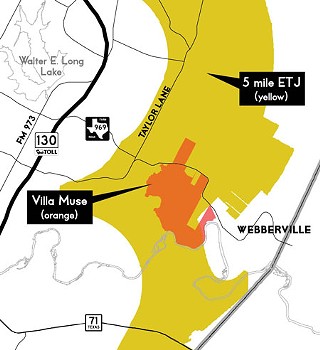 On March 6, the group behind the proposed Villa Muse studios and residential development in eastern Travis Co. confronted the city of Austin with an ultimatum: to release their 2,000-acre project from the planning restraints of the city's extraterritorial jurisdiction, or they would take it elsewhere. Failure to do so, Villa Muse said, would endanger the project because of the "added time, cost, and risk of building within the ETJ." At its meeting, the council split 4-3 against the release, but the plan isn't dead. While Villa Muse confirms it's in talks with other, unnamed cities around the state, the studio group still has options to buy the property and is still in negotiations with Austin. And city staffers are still under council instructions to keep working toward a solution.

"One of the things we've always liked about this proposal is the proposal," said Assistant City Manager Laura Huffman, who describes the plan as "extremely consistent with our visions of the [State Highway 130] development corridor." However, she points out, releasing the development from the ETJ would mean the city would have no control over what ends up on the property in an area the city will almost inevitably annex. "These are about concerns 20, 30, 40 years down the road," said Huffman, arguing that the city is being sensibly cautious. City staff and the Environmental Board were against the release, while the Planning Commission made no recommendation. Even Council Member Brewster McCrack­en, who voted for the release, made an alternate proposal that would have set some benchmarks for the developers. Part of the problem, Huffman suggests, is that Villa Muse created an arbitrary "now or never" deadline on March 6. "So many of the things they're asking for can be done within the current regulations," she said.

In a battle of acronyms, the city had proposed placing the area in a PUD (public utility district) or PID (public improve­ment district). In response, Villa Muse proposed establishing a less-restrictive MUD (municipal utility district), but for the city, this was a nonstarter, since any deal made with the developers would not be binding on the MUD, and the whole development could change completely. "Say there was an anchor facility, like a film studio that would create so many jobs. A MUD would not be bound to do that," said Huffman.

One of the biggest supporters of Villa Muse, and of its release from the ETJ, has been state Rep. Dawnna Dukes. According to Dukes' chief of staff, Pamela McPeters, Dukes was originally approached by Jay Podolnick in March 2007; he was supportive of her work on House Bill 1634, the Texas Moving Image Industry Incentive bill, and got her involved in speaking in favor of the studio development (Podolnick has also become a Dukes donor, giving $4,075 to her campaign last year; previously, he had only donated in state-level races to Republicans – Gov. Rick Perry, Lt. Gov. David Dewhurst, and Land Commissioner Jerry Patterson – and independents such as Carole Keeton Strayhorn). On Feb. 21 of this year, Podolnick e-mailed McPeters, declaring that, "March 6 is our drop-dead date for the city of austin to decide if they want us or not. I could do with some help in filling the chamber with supporters that evening." (The next day, a posting on Villa Muse's own blog said, "we have not announced a 'drop-dead' date for Austin.") In response, McPeters told him, "I will work on getting some supporters to the chamber," but she says she actually didn't get around to anything. "I don't see how we would know anybody in the film community that they wouldn't," she said, adding that Dukes was just being supportive of her constituents.

However, Dukes has been a vocal proponent. On March 18, Dukes argued that the council vote was actually a reversal of the city's stance. She told supporters that in the last legislative session, the city had drafted legislation – Senate Bill 1688 – that, "when you look at the very last reiteration of the bill that is on the House calendar, drew Villa Muse out of the ETJ completely." Dukes, when interviewed after the rally, said Huffman was part of these negotiations and had no complaints at the time. "If there was no issue presented by the city of Austin, who was the sponsor of the bill through the senator [Kirk Watson], then why are questions raised at this time?" Dukes asked.

But both Huffman's and Watson's offices say that SB 1688 (which never reached the House floor) had nothing to do with ETJs. The failed bill dealt with construction around SH 130 and, as it left the Senate, allowed municipalities to establish transportation infrastructure districts. These districts, according to the draft, would have set "regulations regarding drainage and flood control, and ... implement assessments and impact fees to pay for infrastructure" and would have run up to 5 miles out from the toll road or to the limits of the ETJ, whichever was closer. By the time the committee substitute came out of the House Transportation Committee, that boundary had shrunk to 2 miles, but there was no alteration to the Austin ETJ. "That was not part of 1688," said Huffman. "The Villa Muse people asked for them to be carved out of the bill, but it would not affect the ETJ." 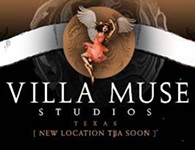