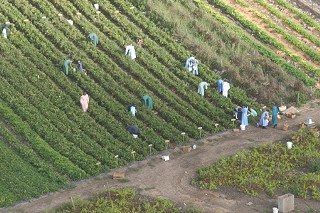 Young girls, dressed in pioneer wear, tend the garden in this photo taken last year. (by The Eldorado Success)

State officials have removed 416 children from the gated Yearning for Zion compound in the West Texas town of Eldorado, home to members of the polygamist Mormon breakaway sect the Fundamentalist Church of Jesus Christ of Latter-day Saints.

Dozens of law enforcement officers with the Texas Department of Public Safety and the Schleicher Co. Sheriff's Office accompanied nearly three dozen Child Protective Services investigators onto the 1,691-acre private compound on April 3, in search of a 16-year-old girl who called a local family-violence shelter last Monday, March 31, to report that she had been "sexually and physically abused at the ranch," said Department of Family and Protective Services spokesman Darrell Azar. The shelter immediately reported the allegation to DFPS, which in turn reported the allegation to the law enforcement officials who coordinated the raid. CPS and law enforcement officers stayed at the YFZ ranch overnight, and by Friday afternoon CPS had begun removing children, ranging in age from 6 months to 17 years old. Among the first removed were 18 girls that CPS investigators concluded "had been abused or were in immediate risk" of abuse, Azar said. By Mon­day, a total of 416 children had been taken from the compound for further interviews with CPS investigators; by Tuesday afternoon, all 416 – every child investigators could find at the compound – had been placed in state custody. One hundred thirty-nine women had also elected to leave the ranch, The Salt Lake Tribune reported. Officials have not said how many men are living in the compound but said that the men have not been allowed to leave it.

Interestingly, however, as of Tuesday evening, the whereabouts of the 16-year-old girl whose call to officials ignited the siege was still unknown. Although CPS and DPS spokespeople have said that the YFZ residents were being "cooperative" with investigators, things reportedly got a tad tense on Saturday night after FLDS members initially refused to let investigators search for the girl inside the large limestone temple that is the centerpiece of the ranch. Rising to an estimated 80 feet high, the temple is the only building on the ranch that is visible to outsiders traveling down the narrow caliche road along the perimeter of the property. This is the first-ever temple built by the FLDS, which has about 10,000 members worldwide, most of whom live in isolated communities scattered across the West. Reportedly, officials sought to search the temple for the as-yet-unnamed 16-year-old; after FLDS members refused, Special Weapons and Tactics officers were brought in, and officials were ultimately granted access to the interior of the temple, the Tribune reported. Still, no girl; in fact, CPS officials cautioned, she may be among those who have already left the ranch but hasn't yet, for whatever reason, stepped forward.

The current situation in Eldorado is the latest setback for the FLDS, whose spiritual leader, the "prophet" Warren Jeffs, was convicted last year in Utah on two counts of rape-as-accomplice and who is currently awaiting trial in Arizona on charges of incest and sexual misconduct related to his involvement in arranging polygamist marriages between young girls and older men who are often married – if not already related to their young wives by blood. As heat brought by investigators simmered in recent years, the FLDS in 2003 purchased the parcel in Eldorado, which church leaders first attempted to pass off to locals as the future site for a hunting retreat. What, exactly, they'd be hunting in Eldorado (aside from deer) wasn't exactly clear – an anomaly that in part piqued the interest of local newspaper Publisher Randy Mankin who, along with his wife, eventually broke the story in their weekly, The Eldorado Success, that the FLDS would become their new neighbors. (For more, see "Meet the New Neighbors," July 29, 2005.) In the intervening years, there's been little in the way of "trouble" coming from the FLDS – the group has paid its taxes (in cash) and has kept to themselves, busy developing the YFZ ranch (named after a song penned by Jeffs). The massive spread is, in essence, a private "town" that includes a public water system that Mankin says is large enough to support roughly 3,000 people. "They're industrious," Mankin told me last year, "but so are fire ants."

The 16-year-old at the center of the sect's current woes is allegedly the mother of an 8-month-old baby fathered by 50-year-old Dale Barlow, to whom she was wed as a "celestial" bride (Barlow's seventh spouse, Azar said). FLDS adherents believe that a man must have at least three wives in order to be exalted to heaven – and that women must submit, with beatific resign, to that arrangement if they hope to hitch along for that final ride. If this polygamist arrangement were strictly among consenting adults, it is far less likely that law enforcement would get involved, but the FLDS' reputation for forced marriages involving underage girls has made the group an obvious target for the prying eyes of law enforcement.

Curiously, it appears that as officials poke around the YFZ for the elusive 16-year-old, her alleged husband, Barlow, is actually living in Colorado City, Ariz., which, along with the twin town of Hildale, Utah, just over the border, makes up the FLDS stronghold commonly referred to as Short Creek – in essence, the sect's headquarters, for nearly 100 years.

Indeed, Barlow pleaded no contest last year to a charge of conspiracy to commit sexual conduct with a minor, and since getting out of jail, he has been under probation supervision. Barlow got a call from officials on Satur­day, notifying him of the new allegations. The call reportedly prompted Barlow to phone his Arizona probation officer, Bill Loader, who told the Tribune, "He said the authorities had called him and some girl had accused him of assaulting her and he didn't even know who she was."

Officials have thus far declined to make public any additional details about the girl's phone call, citing a gag order issued by a judge who approved a search warrant for the ranch – which, in part, allows police to look for records that could confirm a marriage between Barlow and the girl. Nonetheless, CPS spokesman Marleigh Meisner assured reporters that the complaint that sparked the current action is, indeed, legitimate: "I am confident that this girl does exist, and I am confident that the allegations that she brought forth are accurate." 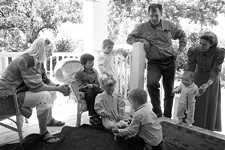