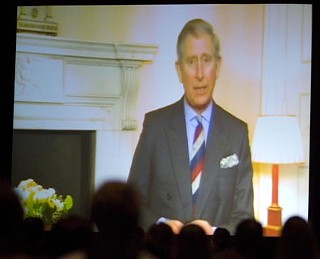 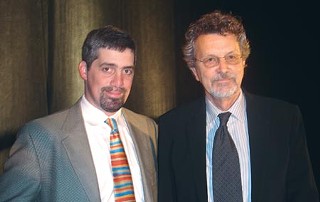 Via Video-Message: Can Prince Charles give a beautifully articulated "carbon neutral" speech or what? Last week in Austin, His Royal Highness appeared virtually to accept a 2008 CNU Athena Medal, at the Congress for the New Urbanism. (Global warming having become the chicly apt excuse for not getting on a plane.) CNU recognized the Prince of Wales for his sustainable New Urbanism work through the Prince's Foundation for the Built Environment – a campaign that Prince Charles noted he's "conducted in the course of personal ridicule for over 25 years." His Royal Highness asked for CNU's partnership in more fully integrating New Urbanism – which focuses on improving the quality of the built environment – with the fight to combat global warming. The common ground: traditional city neighborhoods and urban density. HRH noted that both movements can help create "beautiful, successful, and lively places for people." In Austin, too! (Recognized alongside HRH were Austin's own Sinclair Black and Allan Jacobs, author of Great Streets.)

National planning guru Peter Calthorpe (r) urged Central Texans to tackle two top regional challenges aggressively: getting streetcar transit in Downtown Austin and creating a master plan for the MoKan corridor along new State Highway 130. Calthorpe was the initial consultant on Envision Central Texas; at CNU in Austin last week, he discussed its past and future with ECT board Chair Jim Walker (l). Unless a streetcar is built fast, said Calthorpe, "your commuter rail is going to bring people to Downtown – where they're going to be stranded." He also warned, "SH 130 is going to breed sprawl, if you don't do something about it."

Calthorpe knows Austin, having also helped plan the Triangle and a new Lakeline transit-oriented development. He observed: "Whenever you build a freeway, you drive development. If you don't have a master plan to control that growth, and include transit, you're going to get a whole new wave of sprawl." For more, see "Fast-Growing Austin Rallies Behind Gathering as Chance to Control Its Destiny," at www.cnu.org.