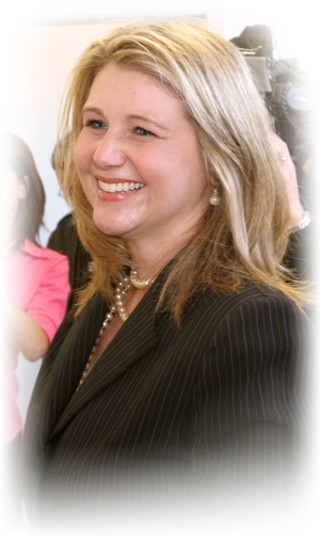 "The district attorney is a woman – how cool is that?"– District attorney candidate Mindy Montford, after her resounding loss to new Travis Co. District Attorney Rosemary Lehmberg (see "Lehmberg Delivers TKO in Final Round").

• Child Protective Services removes more than 400 children from an Eldorado polygamist sect in the wake of a phone call alleging abuse of young girls; see "Hundreds of Children Removed From FLDS Compound."

• Council takes a gander at the $27 million Master Development Agreement for the redevelopment of the Seaholm Power Plant site today (Thursday, April 10).

• As the Austin American-Statesman shrinks, it also grows more expensive. This month, with little fanfare, the paper raised its newsstand price from 50 to 75 cents and bumped all its subscription rates by about 25 cents a week. The announcement was made in a terse one paragraph "note to readers" – no agonized letter from the publisher, no jaunty memo from manag­ing editor (and soon-to-be editor) Fred Zipp promising beefed-up coverage. Just a few lines with the rather weak explanation that the hike "is the first change in the rate in more than 10 years." Circulation Vice President Harry Davis told Editor & Publisher the rate increase was the result of the rising price of newsprint, ink, transportation, and other distribution costs. "I think you are going to see a lot of papers doing it in the next six months," he said. "Businesses go through cycles and I think this just happens to be one of those cycles." It might also have something to do with the paper's steady circulation slide, which has seen the average Monday-through-Sat­ur­day circulation drop from 176,000 in September 2005 to 163,000 in September 2007. But the States­man's woes are hardly unusual. Last week the Houston Chronicle told Austin subscribers it will no longer deliver in the area, citing the same spiraling "economic factors." But the Houston Chronicle did offer area readers a free trial subscription to its online "e-edition," a "complete electronic replica" of the paper. – Kevin Brass 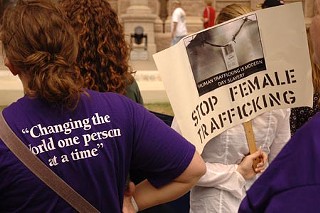 UT social work students rallied for a number of causes Tuesday at the Capitol as part of an annual event. (Photo by Sandy Carson)

• The Travis County Sheriff's Office is promoting a new service called Project Lifesaver, which will help public safety officials keep track of elderly citizens who are prone to wandering due to Alzheimer's disease, dementia, and similar illnesses caused by age. Available to all Travis County residents free of charge, the program provides clients with wristbands equipped with radio transmitters. In the event that the client turns up missing, police can use special transmitters to instantly locate him or her. For more information on Project Lifesaver, go to www.tcsheriff.org/projectlifesaver. – Jordan Smith

• Barack Obama took Travis County – it's official! (Well, almost: As Hillary Clinton's camp keeps reminding us, delegates can still change their minds before the state convention.) The Travis County Democratic Party has released the full results of its March 29 county/senatorial district conventions. Of the 6,427 signed-in convention attendees, Obama took 4,363 (67.9%) to Clin­ton's 2,064 (32.1%), giving him 383 (to her 184) of the county's 567 delegates going to the state convention. But those delegates break down into two types: precinct and at-large. Due to the complicated mechanics, Obama's 352 precinct delegates only netted him 31 at-large delegates, whereas Clinton's 128 precinct delegates came with 56 at-large. How does that work? The "at large" contingent is intended to fix any disparity between the way the precincts may go and the total votes cast. The state convention will be held June 5-7, at the Austin Convention Center. – Richard Whittaker

• Just as Advanced Micro Devices employees are making their move across town to their new Lone Star business campus, AMD announced plans on Monday to cut its global workforce by 10%. The company expects to see a 22% drop in first-quarter revenue compared to last year, which means it's time to start reining in the spending. Too bad they didn't think of that before they built a $270 million campus in the Barton Springs watershed, back before it sprang to life from this innocent-looking rendering. – Nora Ankrum

• The Austin Police Department received a check last month for $188,000 in federal funding to create a Juvenile Gang Intelligence Program database for use by APD and the Austin Independent School District as a way to "improve their methods of information sharing to establish a more effective police response to juvenile involvement in gangs," reads a press release from Republican U.S. Rep. Michael McCaul, who secured the funds for the local initiative. AISD administrators collect information on suspected gang members in their schools, but the district doesn't currently have a system in place to share the information on a districtwide basis, officials report. The new funds will help bridge that gap and create a new avenue for additional information-sharing with APD. Says APD Chief Art Acevedo, "The database will help us reach out to these kids and identify kids that are headed down the wrong path and ultimately help us intervene in their lives." – J.S.

• The League of Women Voters gave special recognition to The Austin Chron­icle last week for our reporting last year on the 10-year anniversary of the Kyoto treaty to reduce greenhouse-gas emissions. Last December, we joined independent newsweeklies across the country in taking a look back at the politics of global warming over the last decade, and to that coverage, we added updates about Austin's own progress toward addressing climate-change issues. The LWV has honored our efforts with their Environmental Awareness Award – go us! – N.A.

• Yet more green props came our way last week, when sensible-growth nonprofit Envision Central Texas announced that Chronicle writer Katherine Gregor is a finalist in this year's Community Stewardship Awards. She joins two other nominees in the Raising Public Awareness category: Downtown, KLRU's Austin-centric documentary-style television program, now in its third year, and the Hill Country Alliance 2008 Calendar, an awareness- and fundraising project for preserving Hill Country resources; 15 additional finalists will be honored in the categories of New Development, Redevelopment, Pioneer, and Public Planning and Policy. Winners will be announced at the awards luncheon May 2; for ticket info, see www.envisioncentraltexas.org. – N.A.

• Last year, Texas became the fourth U.S. state to pass electronic-waste recycling legislation (House Bill 2714, the "Texas electronic take-back recycling law"), calling for computer manufacturers to provide convenient recycling options for their products. The Texas Commission on Environmental Quality is now close to approving specific e-waste rules but voted last week to delay the process and officially reopen public comment on the law's environmental standards. An analysis by Texas Campaign for the Environment – a local nonprofit that played a key role in creating the law and successfully pushed computer makers like Dell to enact recycling reforms – reported that draft rules "fall short on public education, do not guarantee convenience for residents, and may result in electronic waste being exported to developing countries." In a statement, TCE Executive Director Robin Schneider said, "When the Texas Computer TakeBack Law goes into effect on September 1st, residents need to know that their e-waste will be recycled responsibly." The rules should be finalized by July. The TCEQ estimates that about 162,000 of the 1.5 million computers annually discarded in Texas are recycled – the other 1.3 million units are assumed to be stored or sent to landfills, where toxins inside can seep into the air and water. Through the Reconnect partnership, many Austin-area Goodwills will accept and responsibly recycle old computers. For locations, see www.reconnectpartnership.com. For more e-waste info, see www.texasenvironment.org. – Daniel Mottola

• Repeatedly accused of driving policies that were decidedly more protective of profitable polluting than environmental quality, Texas Commission on Envi­ronmental Quality Executive Director Glenn Shankle announced last week his retirement from the agency. Shankle has led the agency since 2004, after serving as deputy executive director for six years. In a statement, the Lone Star Chapter Sierra Club applauded Shankle's improvements to the Texas Emissions Reduction Program and the agency's penalty, inspection, and enforcement policies. However, Conservation Director Cyrus Reed noted that "under Shankle's leadership the agency frequently accepted industrial demands on air permits that were not in the best interest of public health and that ran counter to recommendations of agency scientists." The Sierra Club found the following Shankle policies particularly eco-offensive: rubber-stamping permits for heavily polluting coal power plants with wimpy pollution-control and monitoring requirements, backing a permit renewal for the profoundly polluted ASARCO copper smelter site in El Paso, and recommending licenses for Waste Control Specialists to bury radioactive waste above the Ogallala Aquifer in West Texas, despite lingering staff uncertainties. "While TCEQ has had the legal authority since 1999 to deal with gases that lead to climate change, they have failed to require even basic reporting," Reed added, calling on the new director to fully report and begin to limit greenhouse emissions, as well as strengthen ozone standards. Shankle will serve until TCEQ commissioners select a replacement, expected this summer. – D.M

Watch the Chronicle do it vloggy-style with the inaugural video blog City Hall Hustle. Every Thursday in April, City Hall Hustle will deliver the down-low on the upcoming City Council elections, bringing you profiles and interviews with the candidates – all imbued with the inimitable flavas of City Council reporter Wells Dunbar. Catch the entire three-part series online at austinchronicle.com, starting this week with Place 1 candidates Lee Leffingwell, Jason Meeker, and Allen Demling.