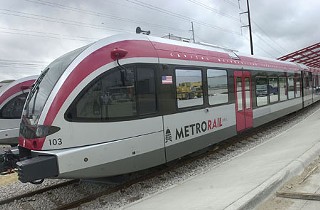 Critics of Capital Metro's proposed transit cuts to services for the disabled questioned why the agency would spend millions on a spiffy new railcar system. (Photo by John Anderson)

The Capital Metro boardroom became the site of a peculiar rebellion Monday. Some of the insurgents rolled in on wheelchairs. Others were led in by dogs. Instead of pitchforks and torches, they were brandishing canes and walkers.

Filing out of Special Transit Service buses and taxicabs, they packed into Cap Metro's lobby, where they waited to be escorted in groups of four, via the agency's only elevator, to its second-floor boardroom. Some folks in wheelchairs had trouble making it through the front door after the button that opens it malfunctioned at a most inopportune time. Those who arrived early had the good fortune of picking up one of the few agendas printed in braille. Those who didn't had to borrow one. Despite the logistical challenges of getting to the meeting (both to the building and the room itself), the boardroom was soon filled wall to wall with wheelchairs – underneath every other chair was a Seeing Eye dog curling up inconspicuously.

Cap Metro contends that changes are necessary to rein in STS spending, which has risen by more than 80% in six years. During the 2006-2007 fiscal year, Cap Metro spent $26.9 million – about 19% of the operating budget – on paratransit, which serves 2% of its ridership. To reduce costs, Cap Metro argues that it must streamline paratransit – by cutting regular taxi vouchers, increasing penalties for no-shows, minimizing the number of riders who are eligible, and cutting the hours when live operators will be in the STS call center.

Opponents at the meeting say the cuts will make a system already fraught with problems even worse. They most fiercely opposed the proposed elimination of subscription taxi vouchers. Currently, those who qualify can receive daily vouchers for regular taxi rides to work, doctors' appointments, or dialysis treatment. Under the proposed changes, taxi vouchers will only be used to handle overflow from standard STS vehicles.

Cap Metro officials say the vouchers are wasteful, unnecessary, and vulnerable to fraud, citing past instances where more than $100,000 was reportedly paid to a single cabbie in one year. Hannah Riddering, a Yellow Cab operator who often carries passengers with disabilities, said fraud in the program is exaggerated by Cap Metro and the media. "Capital Metro staff uses 'cabdriver fraud' as a bludgeon," she said. Voucher fraud was limited to a few bad apples, who were fired more than two years ago, Riddering said, and she blames Cap Metro's lax oversight. Yellow Cab, not Cap Metro, first discovered the abuse, she said.

Pat Bartel, who is blind and frequently uses vouchers, told the board that despite what Cap Metro is claiming, vouchers are actually cheaper than rides in STS vehicles. According to the 2006-2007 budget, taxi vouchers accounted for $3.2 million, or 11.8% of the total paratransit budget. The maximum taxi voucher allowed per ride is $14, while the average cost-per-ride for all STS services, including taxis and STS vehicles, is $46.50, the bulk of which goes to maintaining its fleet and paying drivers. Others noted that STS buses often waste resources because Cap Metro will sometimes use an entire bus to transport one person.

Cap Metro originally planned to eliminate vouchers in March and did so, briefly, until a successful lawsuit brought by the Texas Civil Rights Project forced the agency to reinstate them. When Cap Metro abruptly stopped issuing vouchers without warning, it severely impacted those who had depended on them, including Cheryl Fszol, who says she lost her job as a result. Fszol suffers from seizures brought on by stress and also paralyzing migraines from a brain tumor. The STS vans dropped her off an hour before work each day. Her boss wouldn't allow her to go into the building until someone else showed up, so she would sit outside in the dark, often having seizures in the parking lot from the stress. She was fired from her job, she said, because the company did not want to be liable if she were injured from her seizures.

Cap Metro originally planned to implement the changes without a public hearing, despite Federal Transit Administration regulations that require public participation whenever there are changes to paratransit policy. The changes were billed as "procedural" rather than changes in policy, so it was deemed unnecessary to hold a hearing. Cap Metro Access Advisory Committee members took turns blasting STS Director Inez Evans for failing to consult directly with the committee or with the disabled community at-large. "All of these changes were just rammed through," said Malcolm Graham, who is blind and a member of the access committee. "They presented [them] as if it were a done deal."

Evans opted to bypass the access committee altogether and hired a consulting firm called Texas Citizen Fund. The firm was paid $27,000 to conduct six focus groups, which had a total of 174 participants. The firm apparently told Cap Metro exactly what it wanted to hear: that everyone approved, with the exception of a few minor complaints that required tinkering.

Many opponents say Evans is the driving force behind the proposed changes, though she insists that these events were set into motion long before she took the position. She cited a report from two years ago, which made many of the same recommendations. Bartel said that what Evans is doing in Austin is consistent with her history in the transit industry. Evans worked for a company called MV Transportation, which is the paratransit equivalent of an efficiency expert, Bartel said, with a pattern of reducing services to the minimum required by ADA.

When MV took over paratransit service in Washington, D.C., Evans was put in charge. The Washington Post reported in 2006: "In the first three weeks under the new contractor [MV], Metro received record numbers of complaints from riders, thousands of whom said they were stranded, picked up late or mistreated by drivers or reservationists. MV executives have blamed poor data from [the former contractor], the learning curve of new drivers and reservationists, and telephone problems." Evans resigned from MV after six months on the job. She insists that it was purely a personal decision to take a better job in California.

Evans plans to bring in an outside contractor to do what is called a "functional assessment" of STS riders, to determine if they are physically capable of riding a fixed-route bus, with the intent of bumping riders from STS rolls. But wheelchair-bound riders are concerned that an influx of wheelchairs on buses will be problematic, since all buses only have two wheelchair spots. If both spots are taken, then riders will have to wait as long as an hour for the next bus. Also, the examinations would require riders to turn over personal medical information to Cap Metro, which they consider an invasion of privacy.

Some at the meeting urged Cap Metro to get its priorities straight. Several speakers said it is appalling that the agency can cough up $100 million to build a commuter train, yet it has to cut services for the disabled in the name of saving money. "Many of the comments in the media make it seem like we were riding in limousines," said Richard Villa, who is blind. "I think most of us – if we had a choice – wouldn't use the system, at all."