Travis County Dems have the spirit, yes they do! 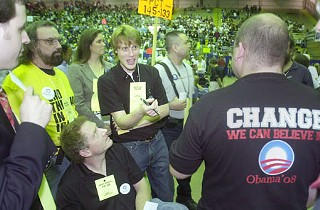 Crowded house at the Expo Center (Photo by John Anderson)

As many elections as we've covered, we're a bit embarrassed to admit this past weekend was our first county convention. But it's fair to say the same was true of hundreds if not thousands of attendees at Saturday's Travis County Democratic Party Convention, since this was the first competitive presidential primary Texas has seen in quite awhile.

Under the sickly fluorescent lights of the Travis County Expo Center, photographers and camera crews from the local media tried to accommodate the greenish hue that embalmed the 8,500 delegates, alternates, campaign operatives, and assorted camp followers that turned out. Lighting aside, the convention was a sight to behold: The Expo Center, not a small venue, was very nearly full for an event that felt like a mixture of both a pep rally and an athletic event. If the Clintonites and Obamanians had been sitting on opposite sides, one might have expected a chant of "We've got spirit! Yes we do!" to break out. (In fact, as delegates began to grow weary and needed entertainment while backroom committee meetings dragged on, a semisuccessful version of the wave made its way around the arena.)

In the big picture, at least at first, the place looked like Clinton's home turf. Her massive campaign banners dwarfed the smaller and sometimes handmade Obama signs. She'd even grabbed the prime spots, flanking the American and Texas flags above the dais. But on the floor, it was mostly the Obama boosters wearing and selling the vital fundraising T-shirts. And when Rep. Lloyd Doggett mentioned his support for Obama, a thunderous half-minute ovation revealed the floor majority; when he mentioned that "some of my best friends" support Clinton, he was met with enthusiastic but noticeably lower-decibel cheers and even a few boos. That unofficial voice-vote was eventually ratified, as Obama won 313 of Senate District 14's 457 delegates to the state convention and 70 of the 110 delegates from the Travis Co. portion of SD 25.

"It's going relatively well. I haven't seen any fistfights," said Rich Bailey, Austin Mayor Will Wynn's chief of staff and TCDP committee member. In fact, speakers were working hard to stifle animosity and pleading for Democrats to keep their eyes on the prize. "I'm a little concerned about our being together today," Doggett told the crowd in his keynote address. "I've received more than a few overheated e-mails. I'm going to read a couple of them to you – they're typical. This is from an Obama supporter: 'If Clinton is allowed to take this election with superdelegates, my husband and I will both vote for John McCain.' [A chorus of "No!" went up from the crowd.] And a Clinton supporter wrote, 'I can't vote for Obama, and everybody I know says the same. I'm going to vote Republican for the first time in 30 years.' [Boos went up.] That's the kind of shortsightedness that is a formula for failure.

"We will either get to the White House together, or we'll not get there at all," Doggett continued. "After all their failures, these Republicans can't win this election in November; but I'll tell you, if we're not together, we can lose this faster than you can say, 'Karl Rove's dream come true.' Just keep in mind that the person who's holding up a sign next to you for the other candidate is the person without whom we cannot secure victory in November."

Wynn's aide wasn't the only visitor from City Hall. Council member and Obama supporter Mike Martinez was working the floor. District attorney candidate Mindy Montford raised her profile by shaking every hand and occasionally having two placard-bearers flank her through the afternoon. (She needed the exposure – much like the Obama/Clinton volume disparity, the applause she received before speaking was pretty tepid compared to the raucous cheer that greeted opponent Rose­mary Lehmberg minutes later – while that April 8 run-off may be a toss-­up, it was not a good sign for Montford.)

The Austin state House delegation was in full force, mostly clustered near the stage, waiting for their opportunity to rally the faithful and issue their own calls for party unity. There were even pointed examples of primary feuds being set aside. Tax Assessor-Collector Nelda Wells Spears swore in precinct captains, while her failed challenger, Glen Maxey, instructed them on caucusing. While Congressional District 10 hopeful Larry Joe Doherty gave his speech before heading off to Houston to give it again, his erstwhile rival, Dan Grant, stirred the faithful in the food queue. "You're hearing the 'Kumbaya's right now," said Rep. Donna Howard.

Clintonite Howard said she had "mixed emotions" about the event, but Sen. Kirk Watson was far more upbeat. "I have been to state conventions that didn't have as many people as this," he said. "I ain't running, but I get to be part of this, and anyone who has run has to be excited by this base." While there were reports of shoving in Houston and Fort Worth, the only excitement in Travis Co. was when a GOP precinct chair, who had managed to get himself registered as Democratic precinct delegate, was ejected from the delegation (although not from the building).

It was, after all, an open meeting. On the upper level, election, re-election, and lobbying campaigns from the Democrat-friendly (like the Better Austin Today Political Action Committee) to the unaffiliated (like Stop Domain Subsidies) to the surprising (the flat-sales-tax advocates of Fair Tax) had their booths. Okay, add "carnival" to the previous sporting-event analogy.

The atmosphere was just wild enough to have Democrats thinking big: "We're going to turn the Lone Star State as blue as the bluebonnets on our highways today," said Doggett. Given that the Texas House is only five seats from a Democratic majority, such a sentiment can no longer be written off as a delusion.