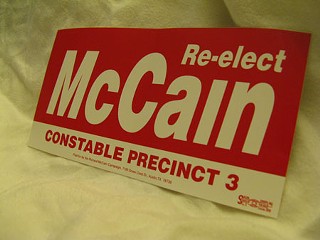 Funny, thought he was going for a higher office. (Photo by Richard Whittaker)

Sen. Kirk Watson had a surprising moment at last weekend's Travis Co. Democratic Party Convention. "I looked up, and there was this big red sign that said 'McCain,'" he said. "It nearly threw me off my speech."

Before anyone starts thinking that Rush Limbaugh's Operation Chaos or Project Mayhem or whatever he calls it has taken hold, calm down; it's not that McCain. The banner was for Watson's fellow Democrat Richard McCain, the Precinct 3 constable who fought off a primary challenge from Robert Eller and now faces GOP candidate Mike Varela in November.

But a big red sign saying "McCain" in this campaign season? Now not to get too semiotic, "sign/signifier/signed" about this, especially since in the rest of the world, red equals left wing, blue equals conservative, but it does seem an (ahem) unusual design choice for a Dem. Not to give the (Richard) McCain campaign any clues, but putting the candidate's first name in a bigger font may save a few shocked double takes in this Democratic stronghold.