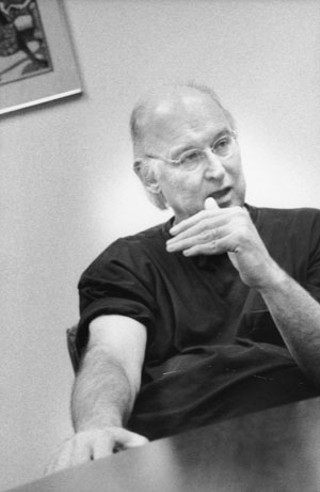 "I see a growing understanding that transit is about land use and how we shape a different future from business as usual." – Capital Metro board Chair Lee Walker, announcing his retirement in a letter to state Sen. Kirk Watson, chair of Capital Area Metropolitan Planning Organization

• Capital Metro board Chairman Lee Walker announced his resignation, amid accolades, after 10 years of service (see at right). And the argument over proposed cuts in paratransit services continued; see "Rolling Rebellion at Capital Metro."

• Creating its own version of the odd couple, Clear Chan­nel Austin has teamed KVET 98.1FM country stalwart Bob Cole and KVET 1300AM sports-talk morning guy Bucky Godbolt for the new Bucky & Bob show, to be simulcast on both the country station and the sports station from 6 to 10am weekdays. While fans of the two stations may be scratching their heads (it speaks volumes that many listeners thought it was an April Fools' Day joke), in many ways it is a marriage of convenience. Cole needed a new partner after longtime sidekick Sammy Allred was shown the door, allegedly for pushing the vocabulary standards of the station. And Godbolt was working solo after his partner, Erin Hogan, left in January after a contract dispute. The move also allows Clear Channel, which is cutting expenses around the country, to save money by filling two positions without hiring any new personnel. A station spokeswoman said there would be "subtle differences" between the show on the two stations, with sports news dropped in on KVET-AM and country-music news filling time on the FM station. – Kevin Brass

• It was "last stop, end of the line" for Capital Metro board Chairman Lee Walker, who announced Monday that he'll retire in May. Walker led the agency through a decade of turbulence and was the man behind some of its most ambitious projects, including the controversial commuter-rail line, which is set to make its first trip this fall. When Walker first came to the board in 1997, he inherited an agency in the throes of a crisis that threatened its very existence. At the time, Cap Metro was riddled with corruption and facing federal indictments. There was talk of dissolving it altogether. The state Legislature passed a bill kicking out the old board, and Walker, as the newly installed volunteer chairman, faced a tough task. But Walker helped piece the agency back together into what is widely regarded as the best transportation system in the state, though in Texas, that's not saying much. He said he's retiring because he wants to focus more on his family and his job as a business professor at UT. When asked why he didn't stay until Red Line, his pet project, was completed, he said he is leaving now to give Cap Metro enough time to find a successor. "I would love nothing more than to stay until the day I take my first train ride. But that wouldn't be fair to the agency." – Justin Ward

• A six-woman federal jury on March 27 concluded that one current and two former Austin Police officers did not violate the civil rights of Ramon Hernandez by using excessive force when arresting him in September 2005. An in-car video camera revealed Officer Christopher Gray punching a handcuffed Hernandez repeatedly, while former Officer William Heilman stood with a foot on Hernandez's shoulder. Hernandez, who was facedown in a fire-ant mound, was struggling to turn over and catch his breath, he testified in U.S. Magistrate Judge Robert Pitman's court last week. Hernandez had been in a minor car accident and testified that after police arrived at the scene of the accident, he began to suffer symptoms of an anxiety attack (he also told jurors that he has schizophrenia, the Austin American-Statesman reports, and that he was feeling symptoms of the disorder that day); in order to clear his mind, he ran off with his Bible searching for a quiet spot to clear his mind and pray. (For more on the story, see "Hernandez Beating," March 28.) – Jordan Smith

• Rep. Michael McCaul, whose District 10 stretches from West Lake Hills to suburban Houston, told the Houston Chronicle recently that he's giving up the earmarks habit. "The system is broken, and it needs to be fixed," McCaul told the Houston daily. "A majority of these earmarks wouldn't get through Congress if they were given the best test of sunlight. Until they put more transparency into the system, I am not going to play the game." Of course, McCaul's newfound piety comes after that paper pointed out that he sponsored or co-sponsored some $20 million in earmarks in the current budget year. Among them: $245,000 to set up a closed-circuit television system at the Houston Zoo, allowing hospitalized children to interact with the animals. That's one earmark for which McCaul wouldn't apologize, and he played the biggest card in the deck to defend it: "You are talking about children with cancer." Smack! Back off, you heartless penny-pincher! McCaul, whose 55% support in the 2006 race was the lowest of any Texas incumbent winning re-election, faces a challenge this November from Austin/Brenham lawyer Larry Joe Doherty, who is easily the best-financed Democrat McCaul has faced during in his six-year political career. – Lee Nichols

• An out-of-state bank has given UT-Austin $2 million to espouse the work of Ayn Rand. BB&T Corp., which has branches in 11 states (but not Texas), made the gift to establish a chair in the Department of Philosophy for the study of objectivism, the philosophical movement Rand established. The gift came after the department and UT philosophy professor Tara Smith approached the bank and its CEO, Rand advocate John Allison. Smith will be the first holder of the chair. The novelist, who died in 1982, has become a leading light for Libertarians and neoconservatives, attracted by her support of laissez-faire economics. While this is its first major donation to a philosophy department, BB&T spokesman Bob Denham called it part of the bank's policy of "supporting universities in espousing the philosophy and virtues of Ayn Rand." A 1991 Book of the Month Club ad claimed that her novel Atlas Shrugged is the second most influential book after the Bible, but her longtime collaborator Nathaniel Branden called her work "intellectually restrictive." In 1964, Rand told Playboy that Hitler and Stalin's shared problem was that they "lacked self-esteem" and that people who place family and friends above work are immoral. – Richard Whittaker

• Greens sounded a solar SOS last week, seeking to halt state rule-making that they say could devastate solar-power development in Texas. At issue was a rule proposed by the Public Utility Commission of Texas addressing "net metering" or the measurement of excess electricity generated and fed back to the electric grid by on-site renewable energy sources. Cyrus Reed, conservation director at the Lone Star Sierra Club, said the rules give individuals no guarantee they'll be paid a fair price for surplus energy and may force them to buy costly, redundant meters. The rules protect utility companies, saddling customers with all the costs and none of the benefits of solar power, Reed said. The rule applies to deregulated utilities, not municipally owned providers like Austin Energy. The rules were set to become official last Wednesday, but after being bombarded by nearly 2,000 angry e-mails, Public Utility Commissioners postponed finalizing the rule until April 9, to allow stakeholders to weigh in. Sen. Eddie Lucio authored the amendment calling for net metering rules in last session's omnibus energy-efficiency bill, House Bill 3693. In a letter sent to the PUC, he said the proposed rules "do not capture the spirit or intent of HB 3693 ... to allow customers to manage energy use and control costs through net metering." He added that they could "limit statewide investment and job creation in this rapidly growing global market." – Dan Mottola

Do you love Barton Springs Pool just the way it is, or are you hankering for something splashier? Either way, here’s an opportunity to wade into the communitywide discussion that includes goals toward protecting Barton Springs water quality. The city Parks and Rec folks will hold a town hall meeting on the proposed master plan on Saturday, 9am-noon, at City Hall, 301 W. Second. The half-day workshop is a continuation of talks that grew out of a 2006 City Council resolution to make improvements at the pool. See more info on the proposed plan at here. (Photo by Victor Ovalle, Austin Parks and Recreation)

• Jorge Bustamante – the United Nations official denied access to U.S. Immi­gration and Customs Enforcement's T. Don Hutto Residential Center in Taylor – doesn't mince words in his indictment of U.S. immigration detention and deportation practices. Presented March 5 to the U.N. General Assembly, Bustamante's "Report of the Special Rapporteur on the Human Rights of Migrants" concludes the U.S. "has failed to adhere to its international obligations to make the human rights of the 37.5 million migrants living in the country a national priority." During his tour of the border, Busta­mante identified underlying "racism and xenophobia," widespread denial of due process, and abuses of migrant laborers, says the report. In biting exposé of ICE policies that destroy families, Bustamante describes "early morning" ICE raids carried out in "forceful fashion": "ICE enters a home with a warrant to arrest one or several immigrants and then proceeds to sweep the entire building, knocking on other doors and demanding to see immigration papers from all the inhabitants. In one case three young boys ... were awakened at six in the morning to find that their parents were being taken away by immigration officers." Bustamante recommends the U.S. form a federal institution "solely devoted to the human rights of migrants." He writes he was "disappointed" the Hutto facility barred his visit. See www.texascivilrightsreview.org/phpnuke/
modules.php?name=News&file=article&sid=1178. – Patricia J. Ruland