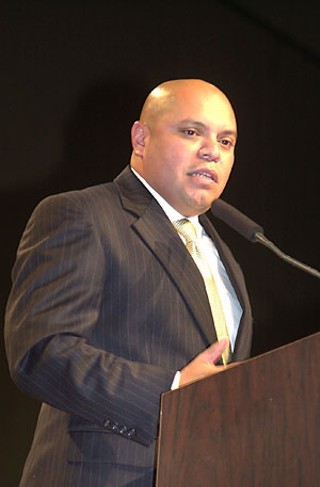 Will Austin continue to do business with a man who has no qualms about using the "W" word, even putting it in writing?

"I don't know yet," Austin City Manager Marc Ott told the Chronicle Monday, in the wake of intense controversy over Creedmoor-Maha Water Supply Corporation's online posting of a March 19 agenda containing an item that read, "Discuss Dempsey's proposed old Harmony Hills tract and possible holding pen for wetbacks" – and speculation whether the city would continue to buy and sell water from the water corp. (Apparently, Emerald Correctional Management, a private firm out of Louisiana, has chosen Mustang Ridge for a megabuck, megabed immigrant detention center, one of many being built across the country to accommodate Immigration and Customs Enforcement's hell-bent trajectory to deport an estimated 12 million undocumented workers as mandated by U.S. Department of Homeland Security.)

At a press conference last Thursday, Austin Council Member Mike Martinez called for the resignation of Charles Laws, Mustang Ridge mayor pro tem and water company general manager, because he wouldn't recant the comment. For his part, Laws justified his choice of words to the media by saying he'd had computer problems when composing the item and, hurried, had used a familiar expression when he should have said "illegals."

Laws couldn't be reached for comment, but News 8 Austin reported that Mustang Ridge Mayor Alfred Vallejo attributed the slur to a "generation gap," which became a refrain hotly disputed by some activists: "It may be a legacy of a dying breed, but it's still inbred," Jose Orta, of LULAC, told the Chronicle. "We should speak out against it every time it's used," he added.

As soon as the slur came to the attention of city officials, according to Martinez, council members notified the Secretary of State's office, which required the item be revised to read: "possible holding pen for ______." But the revision did little to calm angry officials. "Laws had multiple opportunities to retract," Martinez said. "When an elected official so close to Austin, whom we have to work with on a regular basis, chooses inflammatory language and posts it on a public website, we have to ... say, 'Not this time,'" Martinez stated at the press conference, while hinting that the contract between Creedmoor and Austin would be reviewed accordingly.

State Rep. Eddie Rodriguez, whose district encompasses Mustang Ridge, also spoke, saying, "I think it's my duty, not only as a state representative but as a Mexican-American, to do whatever I can to get this man to resign." State Sen. Kirk Watson did not attend the press conference but provided a statement for distribution: "The meeting posting ... goes far beyond the ongoing debate about the state's role regarding immigration. [His] broad-brush slur strikes fear among all people."

Martinez told the Chronicle the press conference was not meant to address whether the federal government should be allowed to operate the detention center on the tract, adding, Mustang Ridge City Council is "an independent government body." But immigrants rights activists present and those keeping tabs elsewhere made the connection, carrying signs reading, "Immigration Is an American Experience" and "Acceptance Is an American Value." Furthermore, border resident and activist Jay Johnson-Castro Sr. wrote in an e-mail that the outcry over the use of the word "wetback" is good only if people see the "holding pen, the prison itself, with the same disdain," adding that the new facility would be a "thousand-bed T. Don Hutto" – referring to the controversial detention facility in Williamson County.