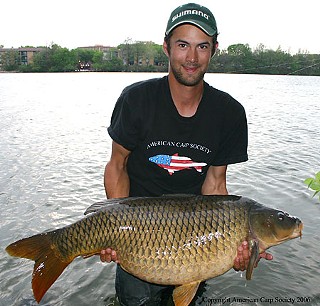 Al St. Cyr and the state-record setting carp he caught in then-Town Lake (by courtesy of the American Carp Society)

Time for hunters to double-check their calendars and make sure of bag limits: At its March 27 meeting, the Texas Parks and Wildlife Commission will consider adopting a series of changes to the state's hunting and fishing regulations.

The proposal with the biggest potential impact for Austinites is a rule change for common carp on Lady Bird Lake. Fishers will be restricted to one carp a day of 33 inches (75% of the world-record catch) or longer; there will be no restriction on smaller fish.

"They're trying to get some awareness of it as a trophy fishery," said Texas Parks & Wildlife Department spokesman Steve Lightfoot. In 2006, Denton native Al St. Cyr set a state record when he pulled a 381/2-inch-long, 43-pound, 2-ounce carp out of the then-Town Lake (and landed a $250,000 prize from the American Carp Society to boot). The new limits should protect some of these bigger fish and increase interest by adding some competitiveness. The lack of a limit on smaller fish should not dent the population, since carp's distinctive gritty taste means it's unlikely to end up on the dinner table. "It's sort of a de facto catch-and-release," said Lightfoot.

While most of the new rules are county-specific shifts to hunting seasons or minor technical changes (like restricting fishers to two rods on community fishing lakes) and would only affect individuals, there's one big commercial change: new limits on the Gulf men­haden. This 7-inch-long, fast-rotting, and almost inedible shrimp-eater is a backbone of the fish-meal industry. TPWD (which regulates commercial fishing in the Texas Territorial Sea, the first nine nautical miles out into the Gulf of Mexico) is considering a total catch limit of 31,500,000 pounds (15,750 tons) a year. This is based on the average annual catch between 2002 and 2006. Lightfoot called it "a proactive measure to ensure we don't get into an overfished situation." While there are no current population concerns, the commission is considering acting now to avoid the situation facing the Atlantic menhaden, where overfishing is thought to contribute to dwindling adult populations.

"If we're having to put in severe restrictions, we're failing as managers," Lightfoot said. "This is just about keeping honest people honest."