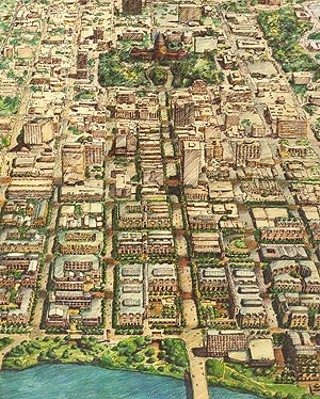 When Black + Vernooy opened its office on West Fourth in 1979, it stimulated the area's transformation into the Warehouse District entertainment area that thrives today. In a 1981 Texas Architect article, Black laid out a plan (shown) to protect the skyline of Austin (and views of the Capitol) by concentrating new development in four- to six-story buildings Downtown. His models included Paris; Washington, D.C.; and Barcelona, all cities with dramatically more density and street life than Austin. This year, ROMA Austin's report for the Downtown Austin Plan (Phase I) suggested Downtown districts – with some allowing only mid-rise new development. About 25 years ago, Black + Vernooy forwarded a New Urbanist vision for the city-owned land that today houses the Palmer Events Center, the Long Center, and Town Lake Park. Black's scheme would have put buildings on 15.6 acres of the 52-acre site. Outdoor entertainment, a children's park, an accessible lake, surrounding cafes and shops, and pedestrian street life would have created a "people place" with far more active uses than today's Town Lake Park. Radically for the time, the public-private concept incorporated a hotel and midrise buildings with housing over retail – yielding property-tax revenues to fund and endow parks and art. But neighborhood and parks activists hated the notion. Revisited now, it aligns nicely with current council initiatives such as the Design Standards and Mixed Use Ordinance. 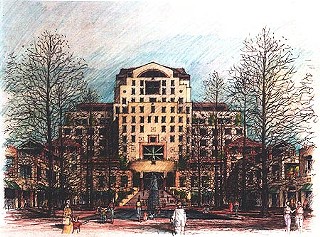 A current trend in New Urbanism – re-energizing downtowns with traditional planning principles – was foreshadowed by this 1984 Black + Vernooy plan for a new City Hall and Municipal Office Complex. After a national design competition, the city of Austin selected Sinclair Black and his firm to execute the plan, which featured a large civic plaza surrounded by retail and city offices, connected to then-Town Lake. But the project was iced in the late-Eighties recession. When the city later revived a stand-alone City Hall project, it left behind the winning mixed-use plan – and Black as architect.

Sinking I-35 (not executed) To remove the ugly barrier created by I-35 that divides East and West Austin, Sinclair Black developed this much-admired vision to move the interstate below grade through Downtown, for through-town traffic. Local drivers would use handsome new tree-lined boulevards at street level. Black's concept was forwarded to the Texas Department of Transportation by a Downtown Austin Alliance committee in reaction to a scary 1995 TxDOT scheme to rebuild I-35 as a three-level superhighway with massive flyovers into Downtown. Many Austinites still would love to see the interstate moved below grade – not only could it heal a civic scar, it could stimulate enormous economic development. But TxDOT shows no inclination to implement the plan. (Black said the agency promises to address it when SH 130 is completed.) Twenty years ago, Black + Vernooy created a New Urbanist master plan for the large tract of land surrounding Central Market on North Lamar (which it also designed). But Black said the client – the Texas General Land Office – didn't comprehend the value of the plan to integrate the residential, shopping, and commercial/medical components to create community synergy. It eliminated almost all traces of the New Urbanist principles, one by one, and instead built a suburban-style project with disconnected shopping, housing, open space, and a hospital. Initially inspired by Allan B. Jacobs' book Great Streets, Sinclair Black has spent about a decade promoting the value and implementation of better streetscapes for Downtown Austin. His advocacy led to the city's Great Streets Program – wide, handsome sidewalks with trees, benches, and other pedestrian amenities (increasingly, 100% developer funded). Sinclair served on the Great Streets Master Plan team, as design architect for AMLI Downtown (pictured), and in creating the 2nd Street District. Black hopes to see the comprehensive master plan fully adopted by council and implemented this year.

Reconnect Austin: Part Two
It's a beautiful vision, but could it work?