Beloved – and snubbed – at home, Sinclair Black to be nationally honored for lifetime achievement Sinclair Black has been tagged with all those accolades, and now he's getting the medal to prove it. The honor from the Congress for the New Urbanism – to be presented at its upcoming congress, CNU XVI, in Austin, April 2-6 – recognizes Black for his efforts to make Austin a better city. As New Urbanism has been locally embraced of late, we all owe a debt of thanks to Old, True Urbanist Black. Over four decades, he's remained tirelessly devoted to inspiring, cajoling, haranguing, and goading Austin to embrace better urban design. Some of his ideas have been transformative: the 2nd Street District, the Great Streets Program. Just as often, they've been celebrated – but never implemented. The history of architecture is in part a history of famous unbuilt projects, and Black certainly has his share (for examples, see "Sinclair Black: Transforming Visions"). As Black noted wryly of the award, "It's for what I've tried to do, more than for what I've done."

He's done plenty. "Sinclair Black has dedicated his entire professional life to a series of grand and not particularly popular causes," observed Stefanos Polyzoides, a prominent member of the CNU board. (Last year he invited Black to collaborate on the River North project in San Antonio; their October public charrette will result in a master plan for an area of more than 250 acres, to be redeveloped with tax increment financing.) "He educated two generations of architects and urbanists at the University of Texas. He advocated the revitalization of Downtown Austin and San Antonio as an architect and a developer when sprawl and urban renewal were the rage. He has contributed hundreds of beautiful projects designed in a form that belongs to the Central Texas region alone."

The Black + Vernooy style is so "quiet" – terra-cotta, limestone, natural materials, and forms scaled to blend into their settings – that most Austinites probably don't know they've spent time in a Sinclair Black building or space. They feel like they've always been part of our town: Central Market on North Lamar, the Schlotzsky's flagship store on South Lamar, the Austin Nature and Science Center, Cedar Street Courtyard, the Helm Fine Arts Center at St. Stephen's Epis­co­pal School, the AMLI Downtown apartments.

A native of San Antonio, Black earned a bachelor's degree in architecture from UT-Austin in 1962; he soon opened a practice and joined the UT School of Architecture faculty in 1967. A child of the Sixties political ferment, he earned his master's degree from the University of California at Berkeley in 1970. His firm (with Andrew Vernooy) has won many design awards over the years; the American Institute of Architects made him a fellow back in 1984. But though Black has made his living as a professor and architect, it's as an (often unpaid) urbanist, a big-picture thinker for Austin, that he's now being recognized. 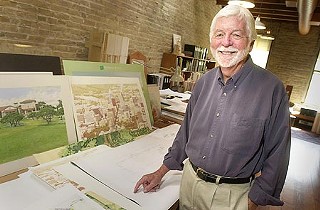 "He is a true prophet in his hometown," noted Polyzoides. "He has been one of very few people who, during the last 50 years, has spoken up in favor of all the right causes: preservation, conservation, reform of planning rules, reining in engineering practices, and the advocacy and practice of intelligent, complex, regionally inspired architectural design." He continued, "While most of the architectural world was asleep at the wheel, Sinclair consistently argued – for two generations – in favor of socially progressive, inspired, and ultimately practical solutions for remaking urban Texas."

Being visionary does come at a price. Other big-idea people tend to venerate Black. But on-the-ground folks – the ones who have had to look after the details required to execute his big ideas or those who didn't instantly grasp their presumed genius – tend to cite his contentious and prickly side. Even those who love Sinclair concede that he hasn't always been the most politic, persuasive, or effective advocate of his own proposed projects, when they required execution by the city of Austin. Some city staffers see Black as impatient and dismissive of plebes who don't get it, an uncompromising purist. Sinclair, in return, minces no words about the small-mindedness of "bureaucrats." Thus their long-running mutual disdain. Black's low opinion of municipal culture and his public thrashings of wrongheadedness by Public Works and other city departments – however correct and even brave – haven't helped him get work from the city. While he's given generously of his time to his community (and to groups like the Trust for Public Land), he's actually been retained precious few times by the city. Sinclair darkly suspects he's been blackballed by staff, causing him to be passed over for choice assignments like City Hall and the Downtown Master Plan.

Pariah or prophet? State Sen. Kirk Watson reminisced about seeking Black's counsel in 1997, when he was mayor-elect and hungry to learn about creating "a great Downtown." He'd heard the man he needed to talk with was Sinclair Black. They met at Cedar Street Courtyard, in the Fourth Street Warehouse District that Black and the Black + Vernooy office anchored and seeded. As Watson tells the story, he asked: "'Can this be done? Can we change the way we look at urban planning and architecture in a highly charged political context?' It was like having the dunce student asking the most basic questions. Sinclair responded in his quiet, precise way: 'Well, we're sitting in what can be done.' Then he set about using that place to start teaching me about good urban design and the thought that goes into it. I relied on him a great deal over the years." Added Watson, "He has suffered this fool gladly, or at least with the appearance of good humor."

"Sinclair has given freely of his advice and wisdom," agreed another legislator, state Rep. Mike Krusee. "The community leaders of Austin, who have brought life and prosperity back to Downtown, have stood on Sinclair's shoulders. Many of them, including me, were directly mentored by Sinclair." He added: "There is nothing quite so enjoyable as being proved wrong by Sinclair Black. And nothing as rewarding as his quiet approval."

Despite pushing 70, Black is revved up to pursue a new venture, Placemaking Studio. The national urban-design collaborative will be a free-form association of respected urban designers, planners, and architects with major development experience. They'll team to provide place-making and urban-design services to master developers, on large-scale public and private projects. Black is excited about the collaborative possibilities: "It's opening up another avenue."

But first, many of those top practitioners are eager to hang a shiny gold medal around his neck. As Polyzoides observed, "It is time to recognize his enormous contributions and to remind ourselves that, in order to prosper and to become grounded in tradition, every town and city in America needs the quiet fortitude and inspiring leadership of a Sinclair Black."

Austin architect Carl Gromatzky, a former employee and student of Black, echoed the thought: "Sinclair has always been uncompromising in his pursuit of a true urban experience for Austin. In some cases, his ideas may have been unpopular at the time, but they were always put forth with the idea of making Austin a more compact, livable city. I hope that his well-deserved receipt of this award makes Austin realize how fortunate we are that he lives and works here."

The Athena Medal will be presented to Sinclair Black on Wednesday, April 2, during the 5:30-7pm CNU session on Austin's Past and Future: Green and Growing. Free and open to the public, the event will be held in Ballroom ABC at the Austin Convention Center. Allan B. Jacobs, author of Great Streets, also will receive a medal.