The 'Statesman's 'World' Keeps on Shrinking 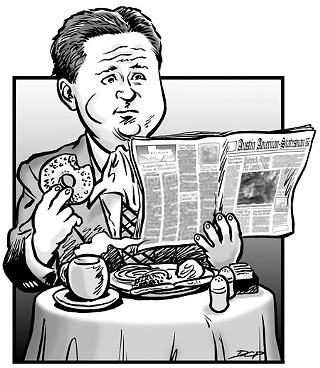 Engaged in the fight of its life, the Austin American-Statesman continues to do battle by shrinking itself, curling into the fetal position, and hoping no one beats it like a bad dog. Management's latest bold move was the decision to drop the weekly TV listings section, "Show World," which disappeared after 40 years, prompting one local blogger to proclaim, "The American-Statesman becomes even more irrelevant."

In a note to readers, Managing Editor Fred Zipp explained that "more than half" of people surveyed by the paper said if "Show World" went away, they "wouldn't miss it at all." TV schedules, Zipp noted, are readily available through cable and satellite services. "It no longer makes business sense for us to devote so many resources to publishing information with a dwindling audience," he wrote. Ads for the section "have pretty much disappeared," he added, apparently shocked that companies were not thrilled to advertise in a poorly printed tabloid consisting of a few generic wire stories stuck in around the TV listings.

But, hey, good for the Statesman. It takes some cojones to declare that something that's been part of the paper for decades is irrelevant. What the hell, it probably had to be done. Papers around the country are dropping the paper-chewing sections.

Yet there's a typically Statesman-esque twist: At the same time the Statesman's brain trust dumped the weekly TV listings, it decided to beef up the daily TV listings. In other words, instead of taking up space in the Life & Arts section for local coverage of music, movies, or theatre, the Statesman is sticking in TV listings to try to appease a "dwindling audience," which, by the daily's own evaluation, likely doesn't give a crap about the service.

In a nutshell, this is why people who love newspapers want to slit their wrists. While experts are calling for radical new approaches, clueless managers continue to make dumb­ass decision after dumbass decision, using tactics that were crowd-pleasers in 1982. They roll out auto sections and consumer advice columns and then throw up their hands and curse that darn Internet when subscriptions continue to slide.

With papers shrinking, editorial space is a precious commodity, every inch a diminishing resource to be treasured and maximized. It's a concept the editors at the Statesman appear to understand only when it's convenient. For example, in 2006 the paper broke from longstanding tradition and declined to publish for free a list of polling places before the election, the type of public service newsrooms once considered routine. This year, before the highly anticipated March primary, the county was forced to use $16,000 of public money to buy ad space to run the list in the States­man, in order to fulfill a state law requiring the polling place locations be available in a "general circulation" newspaper, a field the Statesman has to itself.

Responding to complaints from Travis Co. Commiss-ioner Sarah Eckhardt, Editor Rich Oppel noted in an online letter to readers that newspapers "have migrated many listings, including those for stocks, TV programs, entertainment and polling places, to the Inter­net, leaving more room in our print columns for active news and enterprise coverage."

Yet, in so many ways, that's laughably not true. TV listings haven't "migrated" to the Internet – they're a daily part of the Life section. In terms of weekly column inches, TV listings represent one of the primary editorial initiatives. And even casual readers smirk at the idea that Statesman editors are redeploying their resources, creating more space for "active news and enterprise coverage." The Business section didn't get better when the paper dropped the daily stock listings, it just got smaller. The Statesman's idea of sprucing up the business section has been to add a generic, syndicated personal-finance column and more coverage of commercial real estate. Woo-hoo!

Life is supposed to be the section that brings energy and, well, life, to a paper. It's the fun zone, the section of culture and style, perfect to attract young, savvy readers. Some of the Statesman's best writers work for the Life section, including Chris Garcia and Michael Corcoran. Yet, in the hands of the Statesman editors, Life is stale and regimented, dead on arrival. Daily theme sections are devoted to food, fashion, and fitness – offering the paper's ad guys a shot at a one-day spike in theme-related advertising but assuring that most days the section will appeal only to chubby soccer moms looking to lose a few pounds. The rest of the section is crammed with the flotsam of old-time newspapers – a page and a half of comics, a crossword puzzle, event listings, the horoscope, "Dear Abby," and, of course, the TV listings – all catering to that rapidly "dwindling" audience. There's no space left for anything else, which is why Life is unbearably lifeless. To compound the problem, management usually chooses to print the section early, guaranteeing that any fresh, breaking news in entertainment or the arts is relegated to a couple of paragraphs on p.2 in the front news section. It was a shock last week when the Statesman dropped the weekly theme stories and filled the section with vibrant and interesting local entertainment articles – but, of course, it was only a one-week aberration, for South by Southwest.

Newspaper lovers simply want something to read over the morning bagel. That's it. But the Statesman is finished before you even spread the cream cheese, unless you're fascinated by the paid obituaries that jam the Metro section or an editorial columnist from Waco.

"I don't think print newspapers are dead – they just need to radically evolve," Scott Karp, former publisher of The Atlantic, wrote in a recent column, echoing the beliefs of many newspaper experts. Instead, papers are cutting back, employing a strategy of offering readers less and less and hoping they won't notice. The Statesman's attitude toward TV listings is far too typical. The daily's so scared of upsetting anyone, it gave up a big chunk of its precious editorial space to try to mollify a shrinking audience with a half-assed listings effort, which will only piss them off and drive them to look elsewhere for info on the next scheduled airing of Law & Order.

Statesman subscribers are left to wonder what will be next in the paper's grand campaign to drive them into a newspaper-buying frenzy. Maybe a how-to column on flossing? Maybe drop another page of news? Maybe delete a page of comics?

Of course, that last one is a joke. Manage­ment would never have the guts to cut comics. That's their core readership. And, if they did cut the funny pages, the Statesman editors couldn't possibly come up with anything more interesting than comics, could they?