A year to look forward 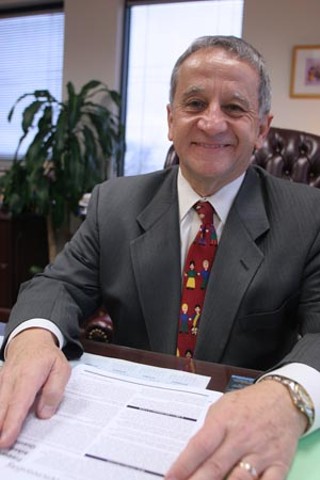 Before Pat Forgione retires as superintendent of the Austin Independent School District on June 30, 2009, he plans to tie up a few loose ends: a $343 million bond proposal and board of trustees elections on May 10, potential new mandates (or opportunities) from the next legislative session, and the selection of the replacement for one of the longest-serving urban district superintendents in the country.

After nearly four decades as an education professional and more than eight years as AISD superintendent, Forgione says he knew he wanted to retire: a rarity, even a luxury, for someone in his position. "The profession of urban superintendent is not exactly one with a lot of highlights," he said, "because nine out of 10 are fired or jump out of town before the trapdoor drops." But he had to find the right time to tell the trustees. He compares the timing to replacing a principal: best done before the school year starts. The Feb. 18 trustees meeting, during which they finalized terms for the proposed interim bond, seemed the perfect moment. "My contract says that I can only get out two ways. I can retire, or I can decease. I'd rather retire," he recalls telling them in executive session. The yearlong period between announcement and retirement means not only will he be around for the board election, but the "new" board (see "AISD on the May Ballot") will have been in place for more than a year before the new superintendent arrives. That timing "will allow the board to see into the future," Forgione said. His public statement at their Feb. 25 meeting, he says, was intended to put parents' and teachers' minds similarly at rest: "I want you, the citizens, to know that I'll be here to answer any question through May and then another year to help implement the changes."

For a superintendent stepping down, staff retention becomes a big issue – even bigger than it already is in AISD, where half of all teachers leave the district every five years. The board has recently adopted contract changes that will extend the paid working year for elementary principals and add longevity incentives for secondary principals. Forgione wants to ensure his departure doesn't cause any further losses, so another part of his exit strategy will be "keeping our good people, making sure that no one leaves because of uncertainty."

Board President Mark Williams, who calls Forgione "a visionary," echoes his concern that the transition be smooth. "It's easy to have a change of leadership and call what's gone before a disaster, but we've been at the cutting edge of so many initiatives," Williams said. They both hope Forgione's biggest achievement – stabilizing the district – will ensure a confident changeover. "He has dramatically rebuilt the credibility of AISD in our community," said Williams. "We were rated 'unacceptable' because of data collection and HR [human resource] practice inconsistencies, and insufficient focus on kids. He built systems to do those things. You can't just say, 'Let's improve things for kids'; you have to build the systems."

"I don't think Joe Public thinks, 'Systems? That's why we hired him?'" said Forgione, "But systems keep good teachers here." They can also cut costs. A new repair-and-renovation management system, coming online by 2010, will allow the district to track essential maintenance needs. The new middle-school campus-improvement plans, intended to tackle achievement gaps, will be launched in September, with the first action teams already gathering data. "I want to be there at that launch," said Forgione.

Another step toward stabilizing the district before handover will be the cash injection of the proposed May bonds. Much of what will be on the ballot is for essential repairs, urgent relief for overcrowding, or mandated investment to reach academic or health and safety standards. Some pre-emptive investment is planned to cushion future growth, like land for a proposed southwest high school. But what was left out has caused as much debate as what was included. Expansion at Zilker Elementary and Murchison and Bedichek middle schools, plus a Mueller Elementary and an extra undesignated elementary, were considered by the Citi­zens' Bond Advisory Committee and the board but ultimately rejected – not because they were not good or needed proposals but because other needs were more urgent. While the designated priorities have raised issues of equity across the district, the already sizable package bumps up against the reality that there's no bond issue big enough to fill every district need.

"I can't be here long enough to do everything we must do, so we must find another good leader who can stay another 10 years," said Forgione. What he doesn't want to happen is a return to the days of a revolving door at the superintendent's office. "In the 1990s, seven people sat in that chair, but the board rallied around me." While he doesn't expect his successor to continue every Forgione policy, he hopes the new person can follow his example by sticking with the district for the long haul, establishing a new era of consistent management. "I want people to say, 'If Forgione can do it, I can do it.'"

"We've had a decade of great leadership. We need to use the equity of our reputation to find that talent," said trustee Annette LoVoi. While the superintendent has no formal say in selecting a replacement, LoVoi said the board will use Forgione's expertise, and the time before his retirement, to work out what the district needs. "I think he's being generous with us, and we intend to respond to that generosity and let him be part of the talent search," she said.

Forgione insists he has no intentions of being just a seat-warmer or recruiting officer. He is determined to work with the state, for instance, to develop a new vision for Johnston High School. "I'm ready to stand up with our community," he insisted, "and we're committed to keeping it open, but that doesn't mean business as usual." There's also the next year's budget, which he will work on and hand over to the next superintendent. But he also plans to make a clear case on education funding to the Legislature, or, as he diplomatically put it, "I will be accessible in the Lege session, because Austin needs it."

As AISD has grown, so has the number of bilingual students, and the proportion of students from poor families has also increased. Each group requires additional district (and state) investment to reach its full potential, and Forgione says the Legislature has to accept some of this burden. He hopes to get the state to agree to adjust annually the cost of education index and release existing cash by removing one major unique burden on the AISD budget. "The district pays 6.2% on Social Secur­ity [in addition to teacher retirement funding], and no one else does. It's an uncontrollable cost," he said. But what is most needed, Forgione insists, is financial aid for schools that show real need – not simply withdrawal of support for those failing to meet state standards. "There needs to be accountability with investment, because this punitive model doesn't work."