Hightower and DeMarco on the powers that ought to be 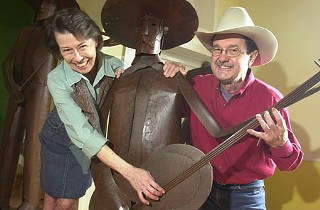 Life is more fun when you're swimming uphill.

That's one lesson to be learned from Swim Against the Current: Even a Dead Fish Can Go With the Flow, the latest book from Austin's populist agitator Jim Hightower (and longtime Chronicle columnist) and his longtime collaborator, co-organizer, and life partner, Susan DeMarco. Released this week, Swim is the first of High­tower's six books for which DeMarco gets an author credit ("with" Susan DeMarco), and the initial concept for the book was in fact hers.

"People are always asking us," she said last week, "how do you two always stay so positive? It's because we know all these stories. So we asked ourselves, 'Couldn't we write a book that tells all these stories?'"

The stories of Swim Against the Current are gathered from Hightower's travels all over the country, watching, supporting, or joining various efforts to make positive political and social change, or, as Hightower likes to put it, working against the "powers-that-be" (corporate and political elites) and in favor of the "powers-that-ought-to-be" (regular working people, everyday citizens). "We have learned literally hundreds of these stories," said DeMarco, "and the most difficult part was simply winnowing them down into those that would fit and make sense in a single book. We could have written a whole book of Austin stories alone."

DeMarco persuaded Hightower that a book should be built upon those stories, organized here broadly into three categories: business, politics, and life. Under the business rubric, the book recounts the story of the Minneapolis-based fair-trade coffee cooperative organized by "a terrific organization with the wonky name of Institute for Agriculture and Trade Policy" and follows that with tales of organic farms, groundbreaking microlenders, grassroots health-care operations (Hidalgo County), a unionized co-op taxicab company (Madison, Wis.), and so on. Under politics, the Oregon Bus Project, an innovative progressive outreach effort to rural areas and small towns, begins changing the face (and faces) of state politics. Life reaches most globally, noticing in particular the story of one evangelical minister, the Rev. Rich Cizik, who has broken with the fundamentalist orthodoxy on environmentalism and global warming and is accordingly breaking down the lines between previously polarized communities.

That quick summation only scrapes the surface of the book, which is an encyclopedia of exhortation, complete with section-ending "connections" listing numerous organizations all over the country for newly inspired readers to ... connect. "The people we highlight," the authors write, "are not only enriching their lives, but creating a new, deeply democratic model for America, edging our country back onto the long road toward egalitarianism and the common good. Join them!"

Hightower and Associates, the local headquarters for all this enthusiasm, is now located in an elegantly converted early 20th century Nazarene church on San Marcos Street, just east of I-35 and south of Cesar Chavez. The former sanctuary is now a big, open, sunlight-filled main office, with a decorative fountain where once stood the altar. In the rear is a warren of remodeled offices, and beyond the big informal garden is what must have once been the rectory. We talked at one of the long wooden tables that center the main hall.

Hightower, 65, and DeMarco, a year younger, have been co-workers since the early Seventies, when they met in D.C. at the Agribusiness Accountability Project, which Hightower had co-founded as one of the various "Nader-like" (DeMarco called them) groups springing up at the time. Their first project together turned into Hard Tomatoes, Hard Times, Hightower's first book, an analysis of the failures of land-grant colleges to share the wealth in agriculture. ("Hard tomatoes" get a cameo in Swim, as exemplary of the abuse of agricultural research to benefit corporate agribusiness at the expense of small farmers and consumers.) Hightower, who at first had gone to D.C. in the staff of Sen. Ralph Yarborough, returned to Austin in 1976 to edit The Texas Observer. A skeptical DeMarco tagged along. "I once made a northeastener's mistake of describing Austin as 'a real good two-year town,'" she recalls. "It took me a long time to live that down."

They soon became a familiar item around town, personally and politically, working together on his campaigns, first for railroad commissioner and then for agriculture commissioner (elected 1982; defeated by Rick Perry in 1990) and on various projects, in and out of office. In addition to the books, says Hightower, "My biggest success is 'The High­tower Lowdown,'" a monthly political newsletter with a national circulation of 125,000. Together Hightower and DeMarco represent and promote an almost personal brand of grassroots populism, distinguished by his ubiquitous 10-gallon hat and the social values the two authors celebrate: "fairness, justice, equal opportunity, stewardship, democracy." The whole of it is characterized by a cracker-barrel, cornball humor that still plays broadly after all these years.

The titles carry the jokes and the purpose: Hard Tomatoes, Hard Times (1972); If the Gods Had Meant Us to Vote They Would Have Given Us Candidates (2001); Thieves in High Places: They've Stolen Our Country and It's Time to Take It Back (2003); Let's Stop Beating Around the Bush (2004); and not to forget the 1997 grandaddy that really distinguished the Hightower brand: There's Nothing in the Middle of the Road but Yellow Stripes and Dead Armadillos. DeMarco says Armadillos still delights their current publishers at John Wiley & Sons, so they were told to come up with something similar. "We must have gone through 50 animal titles – bears? coyotes? wolves? – before we found this one." The cover features the two authors up to their waists in splashing water amidst a crowd of Austinites and a couple of flying fish provided by the art director – although Hightower swears the base image is an actual photo taken in Barton Creek, just above the Barton Springs dam.

"This book is different," says Hightower. "There's less of my usual anti-corporate screeds – although there's plenty of that in there. The focus here, as DeMarco framed the idea, is that we've been meeting all these people across the country, and there is just a lot of progressive work being done that is not being addressed, or even talked about, in the corporate media. We saw this book as an opportunity to tell some of those stories."

DeMarco says that the first problem became winnowing all the stories into a usable, readable book – "You don't want it to be Pollyannish, and you don't want it to be just a list" – so they worked to find a balance between long, illustrative narratives of major projects and shorter tales in the same general vein. "We're sort of opposite, day-and-night people," DeMarco said, "so Hightower would write a section and get it typed up by afternoon, and then I would pick it up in the evening and edit and rewrite and add notes – and something like, 'Don't panic when you see all the remarks.'" And so it went, until they had a manuscript they believed told the story.

"The hardest part was getting it short enough," says Hightower. "You wouldn't believe the amount of material we had to leave out," echoes DeMarco. "We had reams of material on progressive publications, and in the end we just couldn't cover all that."

In the end, the book provides plenty of fodder for the co-authors' inveterate political optimism, and their renewed sense that the country is changing for the better – as they say is currently embodied in the presidential campaign of Barack Obama, whom Hightower officially endorsed just before the Texas primary. "I think the country is changing," Hightower insisted, "and the sudden political expression right now of the Obama campaign shows that the change has been there all along. ... This yearning for change is pretty broad in the public, and yet it never has any support from our media, politics, or education."

DeMarco is quick to add that she sees the Obama campaign as more a reflection of the change than its instigator. "Obama is an expression of this movement in the country," she says. "People were disappointed and angry that they threw the Republicans out of Congress [in 2006], because of the war in Iraq, and yet the war didn't end. But they didn't give up. They've taken that anger and tried to turn it into something positive."

DeMarco and Hightower consider their book another attempt to record, spread, and sustain that wave, one they say must continue not just for a campaign, or a year, but for decades. "That's life," said DeMarco. "These things don't just happen overnight."

"It doesn't happen in any one election," continues Hightower. "It takes generations to make these changes." And they don't claim that such rebellious transformations are easy, as they write in Swim Against the Current's coda: "As you've seen from the folks in our book, alternative paths have their own potholes. But they also open up exciting and enriching possibilities. And just being able to wriggle free of the traps and fetters of the imperious corporate order is its own joyous reward. So, cut loose a little, dare the dangerous, and take a chance on that glorious, uproarious human spirit that is within each of us."

Jim Hightower and Susan DeMarco will appear at a Hightower Hoo-rah and booksigning at Boggy Creek Farm, Thursday, March 20, 5-8pm. It's a benefit for Tex­as Organic Farmers & Gardeners Association ($10 donation requested), with music by the Lovers and La Strada. More info: www.jimhightower.com or 477-5588.