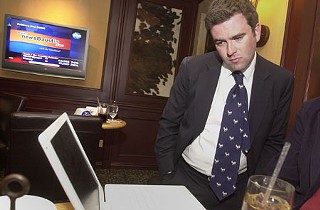 The race for Congressional District 10 – the sprawling House district starting in Travis County and stretching east to Austin, Bastrop, Burleson, Lee, Waller, Washington, and Harris – was expected to be hotly contested. With attorney and television personality Larry Joe Doherty's cash advantage and international-elections expert Dan Grant's collection of impressive endorsements, this battle for the Dem nomination looked evenly matched. But early-voting numbers put Grant down in every reporting county – and by some 4,000 votes in Travis, where he was expected to perform well. The numbers stayed that way the rest of the night, with Doherty winning by more than 20% (61.1% to 38.9%).

"I'm very gratified and pleased," said Doherty, speaking after having just heard from the Associated Press that it was calling the race for him. "I didn't expect the early vote figures to change. ... It's a product of reaching out with our message. We know the voters sent a loud, clear message – they want to clean up Congress." With that, it's time to "get prepped for the election in November and take it to 'em" – "'em" being Michael McCaul, CD 10's Republican incumbent. "Congress ain't gonna be a rubber stamp for Bush like Mike McCaul's administration has," declared Doherty.

"I have a lot of respect for everyone involved in the race," says Doherty, including Grant. "My motto on Texas Justice was there is no justice without love. I try to live that motto." And with the primary race behind him, Doherty says he's ready to dispense justice to Texas voters and to welcome Grant and his supporters into the fold.

"I called Larry Joe to congratulate him and wish him luck," says Grant from his election night Downtown gathering at the Steven F. Austin hotel. "Central Texans are looking for an independent voice ... and I know Larry Joe will work very hard to hold Mike McCaul accountable for the failures of the Bush-Cheney administration."