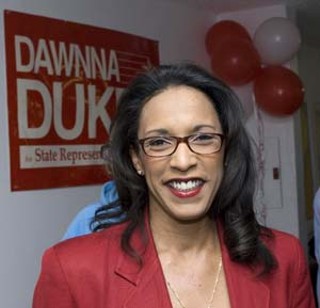 It's rare for a seven-term Democratic incumbent in one of the most Democratic districts in the state to face a primary challenger. But on Tuesday, Rep. Dawnna Dukes saw off Brian Thompson after a race where everything from campaign finance reports to her family seemed fair game. "Their attempts to distort my record failed with the people of District 46," said Dukes. "The politics of mudslinging was a turnoff for them."

Both candidates claimed to be the real voice of East Austin. Dukes, born and raised in the district, had the history, but she now lives in Pflugerville (still in the district) and was attacked for being disconnected from her poorer constituents. Thompson, by contrast, is a native of Alabama, who moved to Austin for law school. He had bought a house in East Austin and claimed he was responding to a popular groundswell against the incumbent. Yet the Dukes campaign consistently argued he had been recruited by forces beyond the district, rather than the voters of House District 46. Ultimately, those voters backed the incumbent overwhelmingly. Thompson took a handful of precincts by a handful of votes, but Dukes dominated others by up to 80%. "The number's huge, and there's only about a 10 percent undervote [i.e., no choice indicated] in our race," said Dukes spokesman Colin Strother. "I'd predicted it to be a lot more than that because Dawnna was on the second screen. A lot of new voters stuck it out, and Dawnna was a clear beneficiary of that."

Thompson went negative from day one, attacking Dukes over her links to Republican House Speaker Tom Craddick and votes against floor amendments to the state budget. Dukes initially took the high road, saying that her position on the powerful House Appropriations Committee had helped her block even deeper budget cuts and that her experience was essential in defending the district.

But the process soon devolved into mudslinging and a war of proxies. The Dukes campaign attacked Thompson for errors in his personal filing statements, while Thompson's cause benefited from a complaint lodged with the Texas Ethics Commission over incorrect campaign finance reports by Dukes dating back as far as eight years. Thompson savaged Dukes for taking campaign cash from big Republican groups like the Craddick-linked HillCo PAC and from major Republican donors like Houston developer Bob "Swift Boat" Perry. Dukes called the charge unfair, since many other Democrats accepted funds from the same sources without criticism, and fired back on Thompson for taking $72,780 from Houston lawyer and longtime Democratic financier Steve Mostyn. (She then went on to accept $67,880 from San Antonio trial lawyer and former Democratic Senate hopeful Mikal Watts.)

In the final two weeks, the rivals and their supporters turned to legal challenges over alleged campaign law violations. On Feb. 22, Austin National Association for the Advancement of Colored People President Nelson Linder made a complaint with the Texas Ethics Commis­sion that one of Thompson's TV ads violated campaign finance law by not making full disclosure of who paid for it. The commission threw out that complaint, and Thompson called it "frivolous and politically motivated." But Thompson fired back with a legal challenge of his own against a Dukes TV ad: On Feb. 28, he sought an injunction to stop Dukes from running claims that he had never voted in a Texas primary. State District Judge Scott Jenkins rejected his request, saying the ad was protected political speech. Later that day, Dukes' family (but not Dukes herself) brought a defamation pleading against Thompson for two commercials they claimed alleged they had corruptly benefited from toll-road contracts. (In fact, only one was a Thomp­son campaign ad; the other came from the Austin Toll Party and had nothing to do with Thompson.)

With Thompson out of the way, and no Republican opponent in November, Dukes has plans for next session. "Twenty-four thousand children have been added to [the Children's Health Insurance Program], putting the rolls back to March 2003 levels," she said, and the next step is to have that figure match the current population-need figures. She's also looking to increase funding for child preventative services and sew up medical-insurance loopholes for emergency procedures. She believes that, no matter how bitter the campaign has been, she can get them passed. "My relationships with members of the Legislature are good," she said, but she has her priorities. "The people of the district should be the most important thing to any legislator."