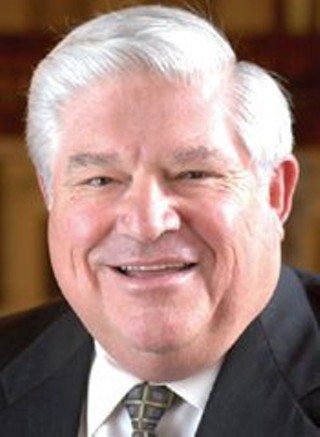 "This historic turnout is another unmistakable sign that voters are ready to replace failed Republican leaders with Democrats who will work for all Texans in Austin and Washington." – Texas Democratic Party Chair Boyd Richie

• The big news was election turnout: Travis County Democrats turned out in such numbers, both for primary-day voting and precinct conventions, that the crowds nearly overwhelmed the process – a festival of democracy all over town. The dust is far from settled, but Hillary Clinton revived her Democratic presidential campaign with wins in Rhode Island, Ohio, and Texas, while Barack Obama won Vermont and still claims an overall lead in convention delegates. (John McCain wrapped up the GOP nomination.) In Travis County, Obama won big, as did (in closely watched races) Congressional District 10 Dem Larry Joe Doherty, District 46 state Rep. Dawnna Dukes, and Tax Assessor-Collector Nelda Wells Spears. In the abbreviated Travis Co. district attorney race, Rosemary Lehmberg will face Mindy Montford in an April 8 run-off.

• And another election looms: Monday, March 10, is the deadline for candidates to file for the May election for City Council, Austin Independent School District board, and Austin Community College board; see "Oh Boy! Another Campaign Season!" 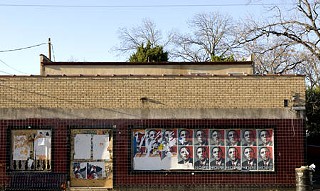 Election day 2008: These weathered and worn Obama posters offer a message of hope on a building at East 12th and Leona streets.

• Mayor Will Wynn formally pled no contest to an assault charge Tuesday, stemming from a 2006 incident where he physically ejected purported party crasher Luke Johnson from his Downtown condo; in a signed statement, Johnson described the "contact as offensive and provocative." Wynn posted a $500 bond, paid $68 in court costs, and – pending 20 hours of community service or private counseling between now and May – should have the charge dismissed. "I pled no contest to a class C misdemeanor from 2006," said Wynn in a press statement. "I'm glad that this process has been resolved, and I, of course, will comply with the judge's order and have this charge dismissed." – Wells Dunbar

• The Austin Independent School District has gone through a lot of principals at middle and high schools over the years, especially at what the district calls "at risk" schools. As a result, the AISD board approved on Monday two programs to keep principals around a bit longer. The first approach is old-fashioned: money. The district will create a Tactical Compensation program for all middle and high school principals that stay in place for three years, starting next fall. If all the principals stay, the cost for the district would be $960,000 – or $10,000 more a year for each principal in the program. The trustees also approved the creation of three "executive principal" positions that would support principals at the most at-risk campuses. – Michael May

• Spay Austin Coalition is on the verge of petitioning the Austin City Council to mandate spaying and neutering of cats and dogs, spokeswoman Sharon Yancey announced this week. "The only way to prevent overpopulation of companion animals is to stop the breeding cycle, and for those who do not show their animals to spay or neuter them," the petition states. "A person works full-time now to kill animals at taxpayers' expense," Yancey told the Chronicle. Of more than 15,000 animals killed per year, three-quarters are adoptable, compounding the tragedy. But that's not all. The petition urges restricting breeding to licensed permit holders, thus "weeding out puppy mills, 'sport' and backyard breeders, thereby raising the quality of animals produced by responsible breeders," and reducing reckless overpopulation. Yancey believes the long-sought ordinance's prospects are good. "We feel pretty confident because the mayor and several City Council members are animal lovers," Yancey said. Until then, Austin will continue to have some explaining to do. "Everyone likes to think of Austin as a trailblazing city. We are falling behind, however, when it comes to the way we treat dogs and cats. ... They have become disposable, thrown out as thousands of pounds of trash. You can choose to turn a blind eye ... or you can do something about it," states the petition, online at www.spayaustin.com. – Patricia J. Ruland

• The backlog in cases pending before the Texas Supreme Court has increased 328% since 2000 – when only 14 cases were pending – to a whopping 60 cases left pending in fiscal year 07, says Austin-based nonprofit Texas Watch. Upon examining court records for the past three terms, the watchdog group concludes in a report released last week that the court backlog is a direct "result of the failure of individual justices to do their jobs expeditiously." The court took an average of 2.3 years to dispose of a case over the 2006-07 term, and left 72 cases pending for more than a year without responding to lawyers' requests for review – an additional 31 cases have been sitting in limbo for more than two years. "By failing to keep pace with its docket, the court makes it more likely that injured patients will go without recompense for lost wages and medical expense, that individuals will be forced to declare bankruptcy, and that matters involving children and marriage are prevented from closing," Texas Watch Executive Director Alex Winslow said in a press release. See the entire report at www.texaswatch.org. – Jordan Smith

• Americans for Prosperity, conservative activists on a mission against taxation, issued a Feb. 28 press release with the miscast headline, "Texas Association of Counties Loses Lawsuit to Taxpayers," which somewhat misleadingly trumpets: "Today, Williamson County served an order against TAC commanding them to refrain from lobbying using dues paid by counties." Here's the deal: On Oct. 18, 2007, District Judge Ken Anderson did indeed issue an "order" enjoining TAC from spending dues to try to influence "the outcome of any legislation pending before the legislature," but he ruled only partially in favor of AFP members Peggy Venable, Janice Brauner, and Judy Morris, plaintiffs in a 2005 lawsuit filed against TAC and Williamson Co. Anderson's order also stated TAC may indeed lobby, if dues are "segregated." Moreover, the Feb. 21 "writ of injunction" (not an order) was requested by David Rogers, attorney for the plaintiffs, making it a demand, not a "command." As such, it also seeks plaintiffs' attorney fees, about $26,000. Next comes a possible defendant's response, then a hearing. Has the battle just begun? – P.J.R.

• Mary Helen Berlanga, a longtime member of the State Board of Education, led a protest outside an SBOE subcommittee hearing last Friday to name a panel of experts to review new standards for the state's English-language arts curriculum. Berlanga, who represents the Corpus Christi area, was angry an alternative proposal, championed a decade ago by former teacher and conservative ally Donna Garner, included a reading list that fails to recognize both modern and multiethnic authors. Berlanga warned that the alternative document is vastly inferior to the work recently completed by a team of current teachers. "The board is on a dangerous road when it begins to support and champion individuals like Donna Garner," Berlanga said. "These right-wingers want to step back into the past because they believe that things were better 50 years ago. They make their feelings and archaic and dangerous philosophies about multicultural education known to all by the public statements they make and what they write." During the meeting, Berlanga and fellow board members Rick Agosto and Pat Hardy, as well as subcommittee member Lawrence Allen, urged the board to approve reviewers that would focus on the needs of nonwhite students. Overruling those suggestions, the subcommittee approved reviewers more in line with the conservative faction's priorities and standards. – Kimberly Reeves

• An environmental ghoul that has haunted El Paso from beyond the grave may come back to life, thanks to a renewed air permit, unanimously approved by the Texas Commission on Environmental Quality last month. Originally opened in 1887 as a lead and copper smelter, ASARCO has left a legacy of unremediated toxic pollution – not just on the Texas/Mexico border, but in four other states. According to the Environmental Protection Agency, ASARCO released tons of lead and arsenic into El Paso's air and created soil and ground-water pollution that poses a risk to human health and the environment. In the late 1990s, as the facility was shuttered amid bankruptcy, state and federal cleanups were mandated, which today could cost hundreds of millions of dollars. The Sierra Club and the city of El Paso vigorously fought the permit renewal. The TCEQ approved it, however, despite recommended denial by state administrative law judges. Some eco-observers believe the renewal is merely an ASARCO tactic to forestall cleanups. ASARCO spokesman Thomas Aldrich said via e-mail: "Asarco will not be commenting on our permit until we receive the final order from the TCEQ. Recent media reports have indicated the city of El Paso plans to continue to use taxpayer money to fight ASARCO." – Daniel Mottola

• According to a new study from the Pew Center on the States, one in every 100 American adults is now in jail or prison. That's right: At the start of 2008, more than 2.3 million adults were behind bars – or one in every 99.1 adults. And, although Texas' prison population decreased by about 300 inmates last year, Texas has now surpassed California as the state with the largest prison population. In reviewing U.S. Department of Justice data for 2006, Pew researchers also found that one in 15 adult black males is behind bars, as is one in 36 adult Latino males. The Pew research estimates prison population differently than the feds do – Pew researchers use the U.S. adult population, about 230 million, as its denominator; the feds use the nation's entire population, which yields a total incarceration rate of about one in 130. For more on the Pew research, go to www.pewcenteronthestates.org. – J.S.

• It must have been a total buzz-kill for Cpt. Joseph Hazelwood, the known boozer at the helm of the Exxon Valdez, when the supertanker ran aground 19 years ago, spilling tens of millions of gallons of crude oil into Alaska's pristine Prince William Sound. Last week the U.S. Supreme Court heard arguments over whether Exxon should pay $2.5 billion in related punitive damages to impacted fishermen and locals – thanks to appeals, that's half the $5 billion originally awarded by an Alaskan jury in 1994. This as Exxon continues to set global profit records, raking in $40.6 billion in 2007. Exxon claims the $3.4 billion in cleanup costs it has already paid is plenty. Back in Texas, conservationists worry about the case's prescient-setting effects. "If Exxon avoids responsibility for this tragic but preventable accident, it will increase the risk to every water-body and coastline in the nation from oil tanker traffic," Charlotte Wells of Galveston Baykeeper said in a statement. Citing state data, Baykeeper says more than 260,000 gallons of petroleum products were spilled into Galveston Bay between 1998 and 2002. With Alaskan fisheries reportedly still devastated and oil still present on hundreds of miles of coast, "The issue is whether we will hold oil companies responsible for the safety of their ships," Wells said. For more, see www.waterkeeper.org. – D.M. 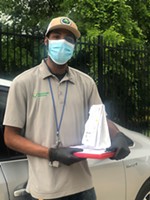