Our elected officials deserve a hearty round of applause for setting forth their "guiding vision and policy principles" prior to soliciting a request for proposals for redevelopment of the Seaholm East Redevelopment District. That's an excellent beginning. Council has announced loud and clear to the community and future master developers its intent "to ensure that unparalleled excellence and high values are demonstrated and achieved."

A Feb. 14 resolution established council's goals for redeveloping the large tract of city-owned land, and a Feb. 28 follow-up detailed the specific criteria for qualified, national-caliber master developers: depth of resources, strong access to capital, and solid experience in similar public-private projects. Winning teams also must distinguish themselves for design and creativity, affordable-housing solutions, and exceeding the city's goals.

Yet council is now fast-tracking the process in a manner that threatens to sabotage its own goals. On Tuesday, March 4, the city hurriedly issued a Request for Proposals from developers, along with a compressed schedule that culminates in a selection decision by June. Likely responders to the RFP include Trammell Crow/Constructive Ventures, Endeavor, Stratus, Catellus, Cherokee, Forest City (with Peter Calthorpe), and Colonial.

What's the rush? Austin will get only one shot at this crucial redevelopment, which will take many years to complete. The city should take the time – a few months at least – to first translate its own vision and principles into a solid land-use plan, based on community-generated values as well as market realities. The fast-track schedule satisfies a desire to let the current council select the developer – but in five years or 20, that consideration will mean nothing next to the quality of Seaholm East.

Council intends to turn the land into about six new city blocks, which would knit together the emerging Seaholm redevelopment, to the west, with City Hall and the emerging 2nd Street retail district, to the east. The 7.7 acres house the defunct Green Water Treatment Plant and an adjacent Austin Energy facility. Sited across Cesar Chavez Street from Lady Bird Lake, the existing utility facilities are anachronisms in a revitalizing Downtown. The council resolution designates the 1.4-acre AE substation site for a new stand-alone central public library. The city plans to sell the remaining 1.7-acre AE control center site and the 4.5-acre Green WTP property to one private master developer.

Because the prime land is owned by the city – that is, by all of us – and worth many tens of millions, Seaholm East represents a tremendous and rare public resource for advancing community goals, aspirations, and values. The council's key goals include top-notch urban design and architecture, public spaces, sustainable/green building, transit connectivity, city-owned parking, and (most recently) on-site affordable housing.

Among the goals listed are "community values, public facilities, and/or public benefits," but those remain undefined. How will the community prioritize its own most-desired values, through what process – and who decides when the standard of "unparalleled excellence" has been met? Another goal is "maximized taxpayer value" through "maximum scale" – implying the troubling and unproven suggestion that optimal value-creation equals erecting skyscrapers.

One council member bullish on a medium-height plan is Brewster McCracken. "The ROMA Downtown Plan report gave us the important realization that achieving density doesn't have to mean height," said McCracken recently. He wants to see the city adopt the Mueller neighborhood plan – another public-private development partnership on city-owned land – as the model for Seaholm East. "As Mueller builds out, it's a timely reminder that we know how to incorporate and promote public values, with our public redevelopment projects," he said. "Every one should be an enactment of our community values."

Downtown revitalization has been so successful and swift, McCracken points out, the city needs to update its initial goals of simply attracting new employers and housing. For example, in selling the city-owned Block 21 to developer Stratus Properties three years ago, the city's primary goals were achieving economic development and a strong urban fabric. The still-unbuilt project includes a high-dollar W Hotel and residences (with concierge poodle-walking service) but no housing affordable to average Austinites. "We're now promoting wealthy people's housing," McCracken lamented. "Government doesn't need to use public land for that."

A Place For Everyone

McCracken says council members want instead to make Seaholm East "a place for everyone." But how? A developer understandably has a vested interest in making a profit, but that alone can become a conflict or at least curtail creative thinking. A key problem with issuing a request for proposal (rather than a request for qualifications) is that it leaps to a specific solution. That can dangerously shortchange master-planning: the critical first phase in which broad goals get identified, prioritized, and translated into a workable program.

Yet the RFP schedule gives development teams just eight weeks (from March 4 to April 30) to propose a full-blown development plan. Between May 12 and 28, council is scheduled to hold up to five special-called meetings for public presentations by the proposing teams. Council would select the winning master developer June 19.

If it's serious about achieving "unparalleled excellence," council should contract first for its own land-use plan – to which master developers then respond. That's exactly the process followed at Mueller: The city hired consultants ROMA Design Group (urban planning) and Economic & Planning Sys­tems (market realities) to translate city and community goals into the Mueller master plan, prior to issuing the master developer RFP. The outcome at Mueller is becoming the pride of Austin. By comparison, the city failed to require a community-vetted land-use plan as a condition of providing similar city tax-increment financing at the Domain. As McCracken said of that project, "Popular sentiment is at best neutral." Who takes pride in subsidizing a Tiffany's?

Integral to the Mueller outcome is the Mueller process: Community involvement occurred early and meaningfully, and citizen advisers continue to stay the course. If the community-input process to shape Seaholm East occurs only after a developer proposal is selected, the greatest opportunity will have been lost. To date, just one community group has pushed and helped refine council's vision for Seaholm East: affordable-housing advocates. In response, council revised its draft resolution to add on-site affordable-housing requirements. How many other smart and dedicated community voices might further refine the Seaholm East vision, given a real chance? If we don't invite them to the table now, we'll never know. 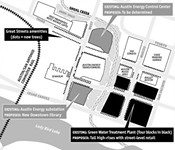 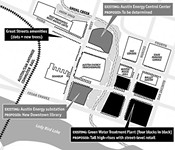