City of Austin, AISD, and ACC poised for another round of elections 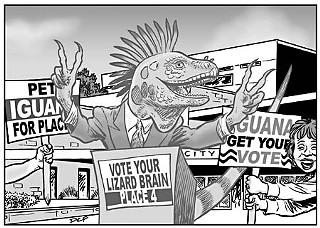 You're letting us down, Austin. You talk a good game on "weird," but eyeing the slate of contenders for May's City Coun­cil elections, we're a little disappointed. Granted, we just skated out of a hard-fought party primary – and election fatigue's set in like dengue fever – but with only a weekend to go until the March 10 filing deadline for the May 10 municipal elections (City Council, Austin Independent School District, Austin Community College), we at least hoped to see someone's pet iguana announcing for Place 4.

As is, not even all the candidates listed below have formally filed their ballot applications, so put down the golf discs, and get to the city clerk if you haven't! Like it or not, campaign season's in full swing. Last night, March 5 – one day after the primaries – the Oak Hill Association of Neighborhoods sponsored the first full-bore council candidate forum. And as you can see from the following candidates who have officially named campaign treasurers, the council contest has gotten more crowded – and yes, just a little more weird.

Kenneth W. Vasseau: No Web or campaign presence aside from announcing his candidacy during council's Citizens Communications hour.

ACC; Yes, They're Running Too!

Elections for Austin Community College board of trus­tees are a generally quiet affair, never suffering from overexposure. But with an open seat, an additional off-year election, and a former City Council member in the running, ACC isn't lacking for action.

With lengthy six-year terms, the board's nine members are elected in groups of three, staggered every two years. The 2008 election puts places 1, 2, and 3 in the balance, which includes the board chair (John Hernandez, Place 2) and vice chair (Nan McRaven, Place 3), whom the members elect from among themselves. So far, the two incumbents are running unopposed. But in Place 1, with member Lillian Davis stepping down in May, two candidates have filed to contest the open seat: attorney Tim Mahoney and ACC student Mike Reid. A wild card at this point is former Zoning and Platting commissioner and Capital Metro spokesman John-Michael Cortez, who has named a campaign treasurer but hasn't actually filed for the office. (Contenders have until March 10 to declare.)

Cortez isn't the only hand from the city in the running. In the specially called election to fill the Place 5 seat being vacated by Rafael Quintanilla (who is moving out of ACC's jurisdiction), former City Council Member Raul Alvarez (who, coincidentally, beat Quin­tanilla when he was elected in 2000) has filed – so far, he's the only candidate running to serve out the seat's remaining two years.

With less than a week to go before the filing deadline, candidates for the Austin Independent School District board of trustees are in thin supply. Four of the nine seats are up for re-election on May 10, including two held by officers – President Mark Williams and Secretary Johna Edwards. But as of Tuesday, no challengers have yet stepped forward, and only two of the incumbents had filed for re-election to the unpaid positions. Candidates have until March 10 to file paperwork to be included on the ballot; write-ins have until March 17.

Place 2 (Southeast): Incumbent Sam Guzman won a four-way race in 2007 to complete Rudy Montoya Jr.'s unexpired term. Though he has not yet filed, Guzman confirmed he intends to run again and wants to build on his experience getting resources to Linder Elementary and Johnston High. "My intentions are to be the same, to be an advocate for District 2 and for the district in general," he said.

Place 3 (North): Board Secretary Johna H. Edwards, the longest-serving trustee at two terms, says she has no plans to run again. But no replacement has yet filed, so under the rules, she would retain the seat. "I'm not seeking re-election, but I may serve," she said.

Place 5 (North Central): Mark Williams has filed for re-election. First elected in 2004, he's been board president since 2006. The accountant has opposed cost-cutting for cost-cutting's sake and gained a reputation early in his term as a data hound. He says the district has a lot of "unfinished business" and that his experience will help forge consensus deals with parents and educators.

Place 8 (at-large): Annette LoVoi has filed for re-election. Just completing her first term, the two-time AISD Citizens' Bond Advisory Committee veteran says she wants to build on the district's high test scores, the largest-ever fund balance, and a triple-A bond rating and to try to use those assets to improve underperforming schools. – Richard Whittaker