Dan Smith (r), longtime aide to County Judge Sam Biscoe, stunned friends and county employees when he showed up for his farewell party wearing a suit. (Photo by Kimberly reeves)

In the nearly 20 years since Travis Co. Judge Sam Biscoe was first elected to office as a county commissioner, Dan Smith has been synonymous with some of Biscoe's biggest accomplishments.

Never heard of Dan Smith? No surprise. But do you remember the news a few years ago of the first waterlines out to the parched and poor community of Northridge Acres? Or the arrival of long-awaited sewer services in Kennedy Ridge? That was largely Smith's handiwork. Or maybe you've turned on the county's cable TV channel to hear a particularly irate citizen giving county commissioners an earful. Most likely Smith was the one who ended up talking to him. And when you think of the one person you could call directly in county government to get a pothole filled or a junk pile moved or water service restored, you'd be thinking of Smith. And now, Biscoe's aide and political consultant is retiring from the county after a long and storied career.

Smith, whose trademark ponytail and thick mustache belie the stereotypical image of a staid bureaucrat, manages to sound both jaded and idealistic when talking about the rewards of helping people navigate the Byzantine maze of county government. "I see the young folk, fresh in government, who think they can put in their eight hours and then go home," Smith said. "I think we should try to do a little bit more than just the required minimum. We are in a position here in government where we can get out there and help a lot of folk, even when it's a little bit harder for some than others. We work for them; they don't work for us."

Clearly, other people in Travis Co. government do the same things that Smith does, but Smith is known for approaching each task, small or large, with a certain panache. A Northerner by birth, passionate by disposition, and famously brash by nature, Smith never hesitates to tell anyone within earshot what he thinks about any given subject. Commis­sioner Sarah Eckhardt, a former assistant county attorney, readily recalls her first introduction to Smith. He was charging into the district attorney's office, clutching some papers and declaring, "This is an outrage!" It's uncertain what that particular outrage was, exactly, but people who appreciate Smith have come to accept his dramatic energy. Friend Stacy Suits, the chief deputy in Con­stable Richard McCain's office, calls Smith "the wild man of county government." Yet he likens Smith's approach to public service to that of the late Texas U.S. Rep. Jake Pickle, who believed that no constituent's problem was too small for his office to address. "He knew, just like Jake Pickle knew, that you have to be responsive to be effective," Suits said. For example, when Suits had a deputy who wasn't receiving child support, Smith took it upon himself to get the payments started. And when a mentally disabled teen was booked into jail for playing with matches, it was Smith whom Suits called to get the boy properly placed.

While Biscoe and his longtime aide don't socialize with each other, Biscoe says Smith is like a brother to him. Smith, who has a long political memory, is also known to occasionally ruffle feathers, prompting Biscoe to step in and diplomatically straighten things out. "When I hired him, I knew he really had what I thought was a kind of keen intelligence about new people," Biscoe recalled. "He knew what to say, how to say it. If I asked him to do something, I knew he would always get it done. And even if his office was a bit untidy, I knew I could always ask him to come up with something, and he'd find it."

Smith, who is 55, has not announced plans for his future. In the short term, he'll return to his political-consulting roots and work on the Hillary Clinton campaign.

Will the Water Flow at Northridge?!?
Travis County finally finds a way to bring water to tiny Northridge Acres 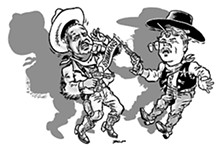