The buzzword for this year's election has been "change." Well, at the leadership level of Travis County party politics, change is unquestionably coming – the county chairs of both major political parties are stepping down. Chris Elliott has led the Travis County Demo­cratic Party for six years, and Alan Sager has headed the Republicans for eight. And on each side of the ballot in the March 4 primary, there is a contest for filling their seats. Stepping up for the Democrats are Fidel Acevedo and Andy Brown; sparring in the Republican ring are Rosemary Edwards and Joe Gimenez.

Dems: The Grassroots vs. Technology

Andy Brown and Fidel Acevedo are familiar figures in Democratic politics, as both have unsuccessfully run for office here before. Brown briefly entered the 2006 primary for House District 48, but when fellow Dem Donna Howard won the January 2006 special election to fill in for the retiring Todd Baxter, he took one for the team and withdrew from the race to preserve Howard's incumbency. Acevedo lost in the 2002 primary for House District 50. 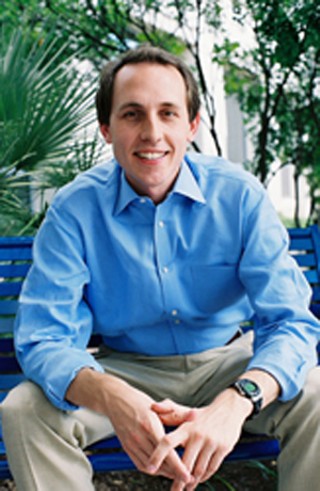 Acevedo says he wants to shake up the party. "The grassroots is not being involved in the Trav­is County Democratic Party," he says. "We talk about it, but when it comes right down to it, we don't go out and really try to get grassroots involvement in the county. We get a certain portion of the county involved, and that's basically your precincts that turn out all the time. ... I can bridge the north-south-east-west divide.

"The other big reason I'm running is we haven't had a contested race in 21 years. It's always business as usual," he says, describing the attitude as "Let's pick another attorney from the same circle of attorneys that always runs the party." Despite the current Democratic dominance of Travis, Acevedo says the TCDP still has a challenge: "Complacency. We can't take our success for granted."

The attorney to whom Acevedo refers is Brown. Brown says he can bridge those geographic divides just as well: "I want to use my experience [as executive director of the 21 Century Democrats] to raise more money than ever before so that we can increase minority turnout to record levels and use new methods and techniques to make sure we're doing everything we can to reach out to new voters," including updating the party's website to make it more user-friendly and easier to capture more e-mail addresses.

He also sees challenges for the dominant Dems: "Absolutely. Valinda Bolton's state House seat is a big priority." That would be District 47 in the southwest corner of the county, which Bolton won in 2006 with a mere 50.24% of the vote; she'll have the GOP gunning hard for her.

GOP: Modernization vs. the Grassroots

On the GOP side, the challenges are more obvious. After Republican-led redistricting (including creating a new district), the GOP changed the Travis House delegation from a 4-1 Dem advantage to a 3-3 split in the early part of this decade; however, the 2004 and 2006 election cycles saw the Republicans give those gains back, and now Travis is all blue.

Joe Gimenez, a public-relations consultant for the energy industry with experience running local campaigns in Houston, says: "The county has a large number of independent voters. It is incumbent upon the next chair to persuade and attract them. Austin is so tech-oriented that the party needs to reach out to tech folks using technology. ... I want to modernize how the party reaches voters." (This reporter can confirm that the county GOP website is next to useless.) Gimenez says the party's losses should be chalked up to the entire party nationally, not just Sager. "We need to motivate better than in the last two or three cycles."

His opponent, Rosemary Edwards, who has a doctorate in business management, was brief in her explanations of why she seeks the office but said, "We need to pay attention to grassroots efforts." As for why Republicans should pick her: "I've been involved in local politics more than my opponent [she's on her third term as chair of Precinct 327]. I've been involved in ballot initiatives, local races, and door-to-door campaigning."