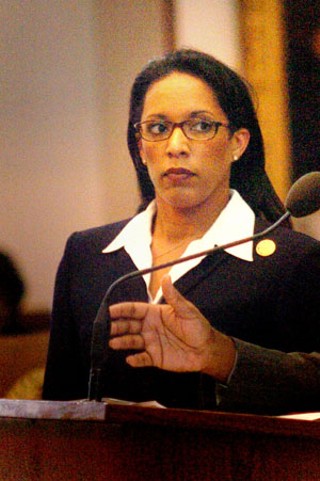 Dawnna Dukes in the House (Photo by John Anderson)

Rep. Dawnna Dukes has staked much of her political legacy, and her reputation as an Austin representative, on her work in the House Appropriations Committee – in drafting budgets, forging compromises on financial issues, and protecting vital programs against funding cuts. Now old but persistent questions about her own financial record-keeping and credibility – both for her campaign and for her business – and about her apparent inability or unwillingness to correct errors and misfilings, have become a central aspect of the campaign to remove her from House District 46.

The latest questions about Dukes' record-keeping concern her business dealings outside the Lege and her consulting company, D.M. Dukes & Associates (focusing on "business resource development," especially for women- and minority-owned businesses). The company failed to file state franchise-tax returns for 2005, 2006, and 2007 and is currently classified as "not in good standing" by the state comptroller's office – meaning the firm cannot do business with any state agency. A recent report by KEYE-TV's Nanci Wilson reported that Dukes had also fallen behind on local property taxes and car payments. Dukes spokesman Colin Strother called the report "an obvious attempt to damage Dawnna" and added that the taxes are an old issue. "It's been paid, but there's some paperwork that has to be filed," he said. However, the franchise-tax payments Dukes says she has paid were based only on an estimate made by the comptroller's office and derived from previous filings. The correct total will not be known until Dukes actually files for those three years, at which point she could become liable for penalties.

Strother said, "Dawnna's response is that, like a lot of people in this district, she's had some tough financial times." During the years in ques­tion, he said, her time was increasingly taken up by the Legislature; the three special sessions in 2005 kept her from her consulting business, and it suffered as a result. He noted that the company went from 10 employees in 2004 to Dukes as the sole owner-operator now.

Brian Thompson, the Austin lawyer challenging Dukes in the March 4 primary, calls Dukes' explanations contradictory. He points to the first special session of the 2005 session, when Dukes notoriously missed a key vote on House Bill 3, a school-funding and tax bill, because she was in France. "I don't understand how Ms. Dukes can choose a European vacation over her obligation to pay her taxes," Thompson said in a campaign press release issued following the reports on Dukes' finances.

Dukes' business woes are additionally complicated by a lawsuit pending over claims that D.M. Dukes & Associates still owes a subcontractor for work performed more than two years ago. S.W. Hale Consulting LLC, owned by Stephanie Hale (who has served on the city of Austin's Planning Commission), is suing Dukes' firm and ProArts Collective for $9,093.24 in unpaid fees plus costs for a fundraiser in 2005 and for organizing the 2006 Heritage Festival held at Huston-Tillotson University. Hale says that she had worked as a subcontractor to Dukes, as an event manager for the 2005 festival, and also provided team-building training for her legislative staff. However, it took Dukes eight months to pay her for the 2005 festival. When payment finally arrived, Hale agreed to organize the 2006 event but says she has never been paid for it. "I'm used to her paying late," said Hale, "but this was ridiculous."

Strother calls Hale's claim "a frivolous lawsuit" that names Dukes solely because she is a public figure. Hale's contract, he argues, was with ProArts not Dukes, and she "doesn't write checks for them." Hale contends that she was in fact paid in 2005 by Dukes, that she has copies of the checks to prove it, and that she was told in 2006 that the contract terms were the same. "I know who paid me the year before for the same work, and that was D.M. Dukes," Hale said, "and nothing changed from year to year."

Hale says she is not raising this matter now to affect the election but the reverse: She believes that only with the pressure and publicity of an election upon her will Dukes finally accept responsibility. She says she also named ProArts because she knew that Dukes would attempt this defense. She says she hoped the suit could have been settled before the primary: A court date was originally set for Jan. 23, but Hale requested a delay because she had moved to Florida. She says she's waiting for a new date to be set, which by law will have to be at least 45 days after the original date – therefore not until after March 4.

The accumulating problems also include older questions about eight years of incomplete campaign finance filings by the Dukes election campaign. The Texas Ethics Com­mis­sion issued a memo in December 2007 reminding candidates and campaigns about the existing rules regarding filing for payments on credit cards. Title 15 of the Texas Ethics Code states that campaign finance reports must list payments to the individual vendors, not to the credit card company that issued the card with which they were paid. However, between 2000 and 2007, Dukes had repeatedly listed the credit card firm and must file corrected reports. There is no additional legal deadline for making corrections, but when she does, the new reports would be classified as late, and she could be liable for administrative fines up to $10,000 per report.

Strother said that the campaign is aware of the issue and working to correct it, but it's a complicated project, and they may not have retained all the records. "This goes so many years back," he said. "We're having to forensically go back and request old statements from credit card companies." He also stressed that, because the campaign has also had to file three finance reports since the beginning of the year, "we haven't had the resources since then" to correct the old filings.

Jake Gonzales, executive director of the Campus Alliance for Progress, a University of Texas student coalition, has filed a personal complaint with the Ethics Commission against the Dukes campaign for violating the financial disclosure rules. His complaint cites more than $41,000 in payments to 10 different credit card companies between September 2004 and June 2007. If the commission finds against Dukes, she could face additional penalties on top of the administrative fines.

The persistent questions about Dukes' personal finances and campaign funds – and more seriously, her inability thus far to provide adequate answers to the questions or resolutions to the problems – have become disquieting issues in her re-election campaign. On Saturday, the Statesman somewhat reluctantly endorsed Brian Thompson – and cited Dukes' ongoing financial troubles as a central reason for its choice. 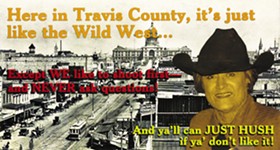