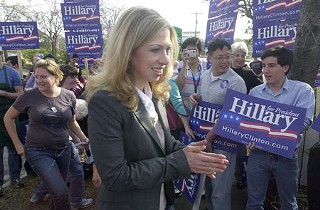 After UT's brass-band fanfare kickoff to last Thursday's Democratic presidential debate, it was a little lonely outside the Rec Sports Center. Around 7:15pm, James Karrington was standing opposite the sports center in the setting sun, unsuccessfully trying to hawk Barack Obama T-shirts to passersby.

"I'm not too good at this," said the 23-year-old from Los Angeles, braided scalp, black leather jacket, blue jeans, T-shirt piles and a small black suitcase at his feet. "But like I said, I'm here for something more important – the 'energy,' the unification of everyone coming together, [being] part of a movement," Karrington said. "It's a beautiful thing. It really seems sincere."

UT freshman Stephen Truong, 18, one of a couple dozen people scattered behind the metal barricades around the building, said he was still undecided and simply curious about the event, "just seeing what happens." He said Obama's "persona is really effective. A lot of students like him because he's a younger candidate." But, he added, "I still think [Hillary Clinton] has a strong chance here in Texas."

Six-year-old Aidan Ellisor toted a campaign sign for Ron Paul, although his mother, Clara Ellisor, was quick to note that Aidan found it on the ground. "Now everybody thinks we're [for] Ron Paul," she said. She and Aidan, along with her husband, Lance, and daughters, Helen and Rachel, were trying to collect as many different signs as they could so the kids could take them to school. Clara had hoped there would be a big television monitor outside for those not fortunate enough to snag one of the coveted 100 tickets offered lotto-style to the public. "I thought it would be neat for our kids to see," she said. The closest they had gotten was a glimpse inside one of the many satellite-topped media vans. Unfortunately, Lance said, the TV seemed to be tuned in to an awards show. "Here we are in a historic moment, and someone driving a news van [is] watching something other than [the] debate."

A small group of Paul supporters was gathered nearby. One clutched an "Israeli Nukes Blackmail" poster and held his own debate with a woman about U.S. Middle East policy. Fellow Paul fan Troy Davis said they were hanging out at the event because, "It's America, you know. It's free speech."

As the evening chill deepened, Eric Nimmer stayed warm by slipping in and out of the rec center – as a Dem student volunteer, Nimmer had scored a building pass, although not a ticket to the debate itself. (UT said it gave away approximately 300 tickets to students in a lottery.) A self-described political junkie, he said he has worked for both campaigns and wouldn't reveal which one he's voting for, although his "entire family is worshipping" Obama, and his grandmother assigned him to get Barack's autograph.

As the debate neared its close, a crowd gradually formed near the exit. Jacqueline Howard asked a student reporter standing next to me for a piece of paper from his notepad. Her 10-year-old, Ashley, hoped to get Obama's signature. "He seems nice. I think he's gonna be good for president," Ashley opined.

Seventeen-year-old Amber, whose first vote will be in November, said she expects to cast it for Obama: "I support his message about change, and I think he's the best man for the job."

On the back side of the building, a small crowd hoping to catch the candidates making a getaway gathered in the deepening cold. One of two Obama T-shirt vendors yelled: "Don't freeze! We've got long sleeve!"

As the debate ended, scores of ties and heels flooded out of the building. A tall, bald, besuited man likened the contest to a boxing match – "It was as close as possible to a tie." Burnet Co. Democratic Co-Chair Shirley Schmidt commented judiciously: "I think we have two outstanding candidates" with similar positions. But she added that she favors Obama: "He understands how you have to work with people and come to a solution." Then she was off to the Hyatt for the $50-a-pop Dem post-party. Rolling up in her wheelchair, 60-year-old Gloria Black said that having a woman nominee is "something we've been working for for a long time" and that she has supported Clinton for 30 years. "I'm not going to abort this ship."

As TV news reporters did their stand-ups, an air of hopeful anticipation charged the grounds; some of the watchers began squealing like groupies – turns out comedian and Obama endorser George Lopez was leaving the building with his entourage. (As a counterpoint, the Clinton campaign announced the following day that popular Tejano group La Mafia has endorsed Hillary.) To the crowd's disappointment, neither candidate ever emerged, opting instead to head Downtown to work the crowds at the Austin Music Hall and Hyatt.

For more coverage, check the Chronicle's News blog at austinchronicle.com/newsdesk.