Debate Night: All the News Next Door

It's campaign season in Austin! 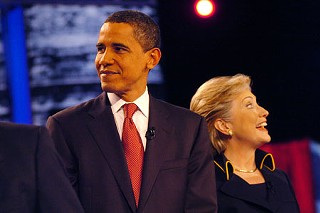 Obama and Clinton before the debate (Photo by John Anderson)

With only 10 days between announcement and event, the Hillary Clinton-Barack Obama debate turned the University of Texas Recreational Sports Center on San Jacinto last Thursday from a gym into a state-of-the-art media center. Only CNN and Univision staffs (and a brief intrusion of photographers just prior to H-hour) were allowed into the debate hall; the rest of the press was corralled away to type and film and record in a separate press area. Guided by two vital signs (one marked "press file center," the other "catering") the global media assumed their assigned desks and caught up with old acquaintances. We hovered around the free fajitas from El Arroyo and checked through the swag bags provided by UT-Austin and the city of Austin. In the lobby, beneath the security checkpoint, TV cameras and stage lights burned power, while the local on-air talent in good suits and comfortable sneakers worked on their deliveries and waited for breaks in the debate. The bulk of the print media was split between the two filing rooms, a pair of cavernous chambers normally reserved for UT's TeXercise gym classes. Meanwhile, the airwaves were being filled from the staff down on "Radio Row" (actually the subterranean corridor next to the squash courts).

An Obama fan on Friday night (Photo by John Anderson)

Once the debate began, the media, along with the rest of the world, watched on TV. There was some blogging, and the international cadre worked on early copy, but mostly the corps waited and buzzed among itself on content. In the hall itself, Clinton caught some early boos for her slam on the unnamed Sen. Kirk Watson for his widely rebroadcast faux pas on MSNBC's Hardball two days earlier. That reaction paled before the later jeering at her "change you can Xerox" zinger against Obama's rhetorical borrowings – judging from the response of the Dem faithful, it's a line we're not likely to hear again before March 4. 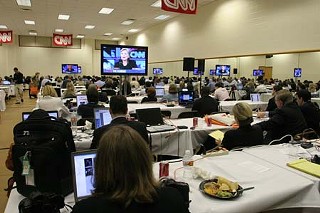 When the candidates finally shook hands and posed for final pictures upstairs, the press corps took off for the "Spin Zone": a narrow slice of lobby between the cameras and the bathrooms where each campaign deployed its proxies. Volunteers circled behind their assigned celebrity, legislator, or expert, with big name signs to remind reporters whom they were speaking to (or, as with the helper holding the Watson sign, who had better places to be). Comedian George Lopez, surrounded by cameras, is famous enough not to need a sign. So the press corps broke one story that night: Mayor Hernandez from Comedy Central's Reno 911! is stumping for Obama. 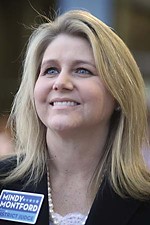 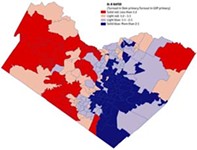