The long, sad case of Texas death row inmate Scott Panetti landed back in federal district court last week, where Judge Sam Sparks is tasked with deciding whether Panetti is indeed sane enough to be executed. According to the state, Panetti is quite likely a malingerer who is clearly able to understand the connection between his crime and punishment and, Assistant Attorney General Tina Miranda argued in court on Feb. 6, Panetti's strong religious beliefs clearly evidence this fact: He believes forgiveness for his crime is integral to his salvation – that underlying connection between right and wrong is solid proof Panetti can comprehend his fate, Miranda argued. But Panetti's defenders, including Austin appellate attorney Keith Hampton, argue an ability to understand is not the same as actual comprehension. Panetti's hyperreligiosity is not anchored in any objective reality, they argue. Indeed, Panetti has long claimed the real motive for executing him is to stop him from preaching "the gospel of the Lord King." At stake is not only Panetti's life but also the evolution of a legal standard that could be applied in other cases where a prisoner's competence to face execution is at issue.

Panetti was convicted and sentenced to die for the 1992 murder of his in-laws, Joe and Amanda Alvarado, at their Fredericksburg home. Diagnosed with a form of schizophrenia, Panetti had been hospitalized at least 11 times prior to the murders and had last been released just two months before he killed the Alvarados. When Panetti turned himself in to police that day, he told police that "Sarge" – a recurring auditory hallucination – was responsible for the crime.

In September 1994, a heavily medicated Panetti was not only deemed competent to stand trial for the murders, but also, Kerr Co. District Judge Stephen Ables ruled, he would be allowed to represent himself in court. Panetti wore a purple cowboy outfit during his trial, filed numerous rambling legal motions, and sought to subpoena hundreds of witnesses – including Anne Bancroft and Jesus Christ. Panetti's standby attorney called the trial "truly a judicial farce and a mockery of self-representation."

Nonetheless, Panetti was convicted and his subsequent appeals were denied until 2004, when his lawyers argued that Panetti's mental illness renders him incompetent for execution. His appeal went before the U.S. Supreme Court, which ruled last summer that the handling of the case thus far had been "flawed" and "too restrictive" to satisfy the Eighth Amendment ban on cruel and unusual punishments; in deeming Panetti sane enough to die, the courts considered only that Panetti "is aware that he committed the murders," that he is "aware that he will be executed," and that he is aware that the state has said he is to be executed because he committed "the crimes in question." The problem, Justice Anthony Kennedy wrote, is that Panetti doesn't actually believe that is the case. In sum, Kennedy wrote it was not sufficient for the court to consider "a prisoner's delusional belief system as irrelevant if the prison knows that the State has identified his crimes as the reason for his execution" – especially if the delusions "so impair" the prisoner's concept of reality that "he cannot reach a rational understanding of the reasons for the execution."

With that, the Supremes punted the case back to the Austin courtroom of Sparks, giving him the daunting task of wading through the legal morass of the Panetti case in order to divine whether he is sane enough to die – a decision that will become the first step in devising a standard for judging mental eligibility for execution that would ultimately be applied to other similarly situated inmates. (As such, it is inevitable the case will again be appealed, meaning that whatever test Sparks applies in his ruling will have to pass legal muster all the way back up the legal food chain to the high court.)

To Rusk State Hospital psychiatrist David Self, there is no doubt Panetti is too deluded to be considered competent: After evaluating Panetti in November, Self concluded Panetti is "delusionally preoccupied with religious themes," which he said is a "very frequent manifestation" of schizophrenia. Moreover, he found nothing to suggest Panetti is faking his illness – if anything, he said, Panetti at times seemed to be "faking good," by trying to present himself as more rational than he actually is. However, Panetti does not comprehend the real reason for his execution, said Self, as he believes he's a player in a spiritual war being fought between the forces of good and evil. Self said Panetti told him that in this fight, the state of Texas has been deluded by the devil: Although the state has come to believe it seeks his execution as punishment for his crime, Panetti believes the state has become a pawn in the devil's game to silence his preaching.

Under questioning by Assistant AG Miranda, Self testified he believes Panetti is incapable of "a rational understanding" of why he is to be executed. But, Miranda pointed out, Panetti comprehends the cause-and-effect nature of his circumstance and the concept of good and evil – indeed, the notion there is a "war" between good and evil is not unusual and would not on its face be considered delusional, she noted. "Is believing in spiritual warfare a fixed false belief?" Miranda asked Self. 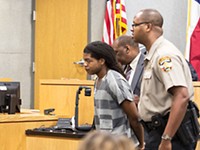