Heading west from Central Austin on Bee Caves Road is a little like crossing the border. Not into Mexico but into an entirely wilder, weirder place: Hollywood. Multitiered, multimillion-dollar homes dot the hillsides, and well-manicured strip malls even manage to give RadioShack and Massage Envy retail stores a posh veneer. Big names and big money have made the once-rural area a place to see and be seen in luxury cars rather than weathered pickup trucks.

Naming West Austin's new $5.8 million library branch after someone with both a big name and big money seems only appropriate: The Laura Bush Community Library, at the intersection of Bee Caves Road and Cuerna­vaca Drive, is scheduled to open in 2009 as a second branch of the Westbank Community Library. But for one West Austin man – who happens to drive a weathered pickup truck – there's nothing more inappropriate. Last Aug­ust, Alan Roddy launched a one-man crusade to change the library's name to honor U.S. military veterans rather than the first lady.

If that means run-ins with the cops for possibly conducting "criminal mischief," writing open letters to Laura Bush in local papers, or running for public office, that's fine – Roddy's willing to do whatever it takes. Sitting in his truck at the as-yet-undeveloped library site, he looks out at the hillside view that will greet patrons in a couple of years. "This is solitude," Roddy said, "for a kid who's lost his mother or father in war who can come here and know his community cares about them."

Roddy's shaggy gray hair seems to drip from beneath his black U.S. Army veteran's cap as he shuffles through the piles of paperwork he has assembled over the past six months, ever since he saw a sign go up at the future library site with Mrs. Bush's name. Roddy, who works for the city of Austin's information technology department, is certainly playing the role of a solitary David in this fight against Goliath; Laura Bush publicly accepted the honor of a future eponymous library at an event last August. 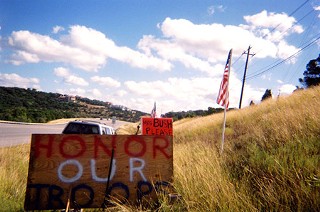 "I went directly to the hardware store," said Roddy, when he heard Mrs. Bush would be in town. He bought plywood for an "Honor Our Troops" sign that he nailed to the Laura Bush sign at the future library site. When it was removed, he installed another, just in time for Laura Bush and her Secret Service detail to view the sign upon her visit to the new site. The Travis County Sheriff's Office was called, but Roddy refused to remove his signs. So far, no charges have been filed against him.

Library staff and board members say they can honor both the troops and Mrs. Bush, who is very likely America's most famous librarian. "I agree with Mr. Roddy that the veterans should be honored," library board member and retired lobbyist Dick Brown said in a phone interview. Brown said he plans to propose the new library's plaza be named in honor of the troops, while keeping Laura Bush's name on the branch. Laura Bush "embodies what we at the library level consider the best of the library movement," he said.

A representative for Laura Bush said the first lady had no comment on Roddy's efforts and that her office was not aware of Roddy's protests at all.

Roddy has run open letters to Laura Bush in the form of advertisements in the Westlake Picayune and in the Austin American-States–man, citing his motto: "Public buildings should be named in public with community involvement." The Westbank Community Library District draws funding from area sales taxes, and the library itself was rated as a runner-up for "Best Small Library in America 2007" by the Library Journal and was given an Achievement of Excellence in Libraries Award in 2005 by the Texas Municipal Library Directors Association. But for all its awards, Roddy says the library district hasn't been transparent about its naming process.

"They didn't have a written naming policy," he said. Agenda minutes from the Westbank District meetings cite the group's intention to delineate a library-naming policy, but no clear decision was reached. According to Brown, "The naming of the library took place under the Open Meetings Act." Roddy said the district's 8:30am meetings on Wednesdays aren't open enough for working citizens.

Regardless, Roddy insists he respects the library board and that he's not a troublemaker. "I'm no Cindy Sheehan," he said. "I'm not trying to throw mud at anyone." He said he plans to run for a position in the library district in 2008.