The Naked Court Report: From the Gilded Halls of Williamson County

Disorder in the courthouse 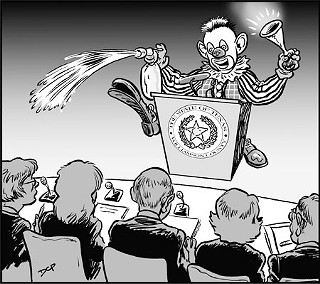 Williamson Co. commissioners' latest stab at gentility and order appears to be in trouble. On Tuesday, Jan. 15, be-suited commissioners, seated in their newly restored courthouse, received a gentlewoman caller. Though dude duds and consummate civility might seem to some to meld well with the multimillion-dollar parlor ambience, Rebecca Bernhardt, representing the American Civil Liberties Union, politely but firmly objected to the court's new rules of dress and decorum as stifling and asked commissioners to drop the decrees voluntarily.

Commissioners approved the regulations – which stipulate a business attire dress code and ban insults during court – back in Octo­ber, in the aftermath of one messy melee after another. Among other things, angry protesters decried the following during 2007: the untimely deaths of cats and dogs that wasted away or got the needle in an unsanitary animal shelter; WilCo's renewal of a 2006 county contract with U.S. Immigration and Customs Enforcement to jail immigrant minors at the T. Don Hutto detention center in Taylor, despite an uproar over guard-on-detainee sexual assault and the hiring of illegal workers; and WilCo's stubborn bypass of the bid process that has allowed Waste Management Inc. to operate the county landfill unchallenged.

"Requiring business attire has a potentially chilling effect on public participation. The rule regarding insulting speech is even more troubling. People are likely to shy away from criticizing the Court out of fear of sanction," said Bernhardt in a press release announcing her visit.

During the citizens' comment segment of the meeting, as an intimidating jumbotron stopwatch on the wall projected seconds left to talk, Bernhardt criticized the rules as too vague and broad, and asked commissioners why some riled-up citizens' earlier name-calling was not dubbed insulting, per the ban. (Arguing over subdivision regs, citizens had called rivals liars and money-grubbers.) A little later, Judge Dan Gattis teased a citizen for wearing jeans at the podium – but did his pitty-pat playfulness have insidious underpinnings? After all, the rules could be used capriciously as a tool for quelling criticism of commissioners, Bernhardt told the Chronicle.

Former Travis Co. Judge Bill Aleshire, who serves on rotation for the Freedom of Informa­tion Foundation of Texas, also weighed in on the regulations: "If I want to dress up like a clown and attend court, it's my right to hear what goes on. It's also my right to address the court."

According to Connie Watson, WilCo public information officer, the court is re-evaluating the new policies.

Driving yet another chasm between commissioners and citizens, "more private" quarters for executive session were recently built. Apparently space-age insulation was not in the renovation budget, however, for staff reported two weeks ago they could hear through the walls. (The unconfirmed story is also that a reporter heard something he shouldn't have.) As a result, no one's allowed within earshot and must leave the second floor entirely during executive session. Commissioners met in the relatively soundproof booth for the first time on Tuesday.

The pièce-de-résistance of recent courthouse uprisings, however, has to be what occurred on Jan. 2. According to police reports, a man was "acting strange" and "screaming on the second floor" of the courthouse. A dozen officers from three agencies arrived on the scene, "sirens blaring," according to one county official. Officers then reported the "male subject is now naked ... and laying on the balcony." According to one officer, the man spread his arms as if on a cross. Report­edly, he then quixotically held a cane with a sword at his side, while he lay on the cold balcony. Beside him were the clothes he'd neatly folded (which should have won some points with commissioners).

No one could say why the man felt so persecuted – "He was having a bad day," another county employee said – and was taken away on a stretcher. Police reports note an emergency commitment was authorized but do not say any charges were filed. Judge Gattis is contemplating beefing up security at the courthouse in response to this disturbance, Watson said. 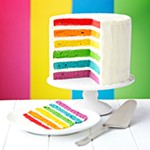 Qmmunity: Let the Haters Eat Cake
Plus, beer that gives back, storytelling for Stonewall, and more LGBTQ events