The Crunch at Linder 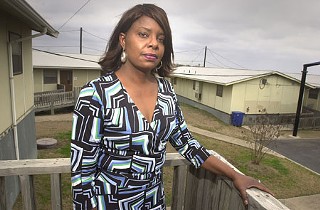 When the Citzens' Bond Advisory Committee was looking for urgent and imminent needs, few facilities caught the members' attention like Lin­der Elementary. Set on a hill in South Austin and designed for 600 students, Linder currently teaches 931, putting it at 155% of capacity, with a projected 194% by 2012. It depends on 25 portable classrooms, but core facilities are also overstretched, like a gym that must hold two classes at a time and a cafeteria that starts serving lunch at 10:05am and doesn't finish until 1:25pm. "We can't schedule programs like assemblies that use the cafeteria, because they're serving breakfast until 8, and we have to be out of there before 9:45," said principal Beverly Odom.

AISD staff recommended $5.6 million for eight new classrooms and some shared common facilities. CBAC suggested instead a radical alternative – an early-learning center, relieving pressure on the school and allowing it to concentrate on the elementary grades. District staff turned this into a two-stage proposal. First, redistricting to move 230 children to surrounding schools. This would take next year's anticipated rolls down to 770 (128% of capacity). The district, if it adopts the plan and voters approve the bonds, would open the prekindergarten and kindergarten center, either by renovating an existing facility nearby or building from scratch. It could take 287 students in 2011, pulling Linder down to 97% capacity and allowing AISD to consider classroom additions with less urgency.

Odom called the center a good plan, "as long as it's on this side of town and in a safe area," and also backed redistricting, with a codicil. "The best way is to go ahead and change the boundaries, then monitor it," she said. She should know: Between Odom being hired as principal and her first day on the job, Linder's rolls had swelled by 160 students. AISD estimates show the relief provided by a center would be only temporary: By 2012, the school would hold 309 students, and Linder would be back up to 625 – already 4% over capacity.

Even this solution could take two to three years to implement and doesn't solve all stresses on employees even after redistricting. The school desperately needs more canteen workers and an additional librarian. "It would have been thoughtful if the district had given us more staff," said Odom, praising teachers and support workers for keeping Linder going. "We just do it, and we don't complain."