While the chill outside confirms it's that sad time of year for the annual Cowboys collapse, Thomas "Hollywood" Hender­son (former linebacker for America's Team) has won a big one – with a special teams assist from City Council.

During zoning hearings last week, council unanimously voted against more restrictive McMansion regulations for some 655 lots in the Central East Austin Neighborhood Planning Area, an area roughly bound by I-35, Chicon, MLK, and Seventh Street. Home sizes are currently limited to either a 0.4 floor-to-area ratio – basically 40% of the lot size – or 2,300 square feet (whichever is larger). But the Organization of Central East Austin Neighborhoods proposed a McMansion amendment that would eliminate the 2,300-square-foot option, leaving only the 40% FAR require­ment – a necessity, they believe, to slowing overbuilding, gentrification, and the spiraling property taxes concurrent with larger houses or developments on the historically smaller lots. The Planning Commission agreed, forwarding OCEAN's request in its 7-0 recommendation to council.

Enter Henderson. Following the commission decision, the grizzled gridiron vet and Lotto Texas winner, who has a homestead and owns Eastside lots on Cotton Street, distributed an incendiary letter blasting "big government trying to control our Historically Black Community." The four-page screed defending "property rights" included a petition against the amendment, which Henderson submitted to council. At the Thursday hearing, Zoning staffer Jerry Rusthoven reported receiving "about 266 letters in opposition" to OCEAN's 45 or so in support.

Speakers in favor denigrated Henderson's petition, saying it was sent to the entire 78702 ZIP code – not all of which would be affected by the amendment – and was riddled with overstatement and oversimplification. OCEAN President Rudolph Williams didn't address Henderson directly but spoke to the amendment's need, saying small single-family houses are being razed and "replaced with $300,000 houses. ... The pressure to tear down those small houses because of the appraisal system and because of the taxes is just tremendous." Henderson defended his petition effort, saying he "probably would have got 800 if I would have put a return stamp on the envelope." Citing not-entirely-exclusive needs like increasing density and affordable housing and preserving the neighborhood's character and property values, he excoriated OCEAN for what he called its "clandestine meetings at the Carver Library," where the organization voted (narrowly, in his telling) to support the ordinance. Another speaker, saying she wasn't "hoodwinked or bamboozled" into signing Henderson's letter, declared, "I'm not a slave. ... Either you have a right to own property, or you are property."

Ultimately, the petitions and pitched rhetoric might not have even been needed; before the hearing even began, Mayor Pro Tem Betty Dunkerley said she "probably won't be supporting this" due to concerns "the impact is going to be too great." Brewster McCracken called the 2,300-square-foot option an "incredibly important part of the compromise." With the protracted 2006 squabbles over the McMansion Ordinance still fresh in their minds, the council members were visibly hesitant to revisit the issue, voting 7-0 to leave things just as they are.

Not one for winning graciously, following the amendment's defeat Henderson sent an all-capped e-mail to Williams announcing, among other things, "A COMMITTEE THAT MEETS AT THE CARVER LIBRARY DOES NOT HAVE THE RIGHT OR POWER TO PULL OFF WHAT YOU TRIED TO DO. THAT 7-0 VOTE WILL HOLD YOUR MONKEY ASS. YOUR LAST ARGUMENTS TO COUNCIL JUST CLARIFIED HOW OUT OF TOUCH AND STUPID YOU ARE." 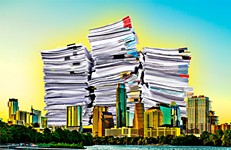