A report from the endorsement circus 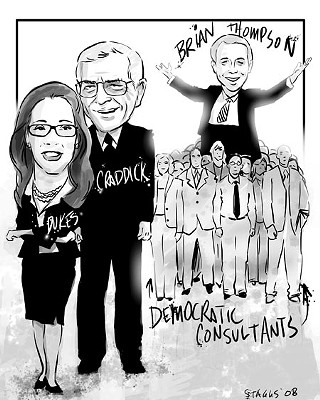 Unless you've been living under a rock for the past few months, you might have noticed: There's an election coming up. But you might not yet have realized there will be names on the ballot other than Clinton, Obama, Huckabee, and McCain. The primaries are coming to Texas March 4 (early voting runs Feb. 19-29), and the Texas politicking is just hitting full stride; battle lines are being drawn and endorsements declared.

Unlike the rest of Red Texas, the dominant Travis County party is of course the Democrats. Last week, seven Democratic clubs held a four-hour clusterfu ... er, forum, bringing together almost every candidate who will be seen on the spring ballot. Six of the clubs handed out endorsements at the end of the night. It wasn't exactly a foolproof process: Each candidate made a one-minute opening statement, followed by two questions, asked by rotating clubs selected at random. An even deeper weakness is the loose membership of some of the clubs – interested parties could pay dues that night and instantly become voting members of a particular caucus, which leads to understandable charges of candidates mobilizing supporters to stack the votes (see "Election 2004: Endorse-o-rama!" March 5, 2004).

However poor a method of picking favorites, the evening was great for something else: sound bites and catfights. While a variety of issues crucial to Travis Co. and Texas was raised, these are the party primaries, so one issue bubbled repeatedly to the surface only of importance to the blue side of the ballot: loyalty to the Democratic Party. At this particular junction in Texas history, this is no mere pettiness. Written off as a joke only two election cycles ago, the Dems clawed their way back to relevance in 2004 and 2006, taking back three fairly conservative House districts here in Travis and coming within five of a House majority. On this night, any candidate who ever dared stray from the flock got his or her nose bloodied.

Foremost among the targets was seven-term state Rep. Dawnna Dukes, whose District 46 covers East and Northeast Austin. She's drawn the ire of local Dems by her apparently unwavering loyalty to Republican dictator – excuse me, speaker of the House – Tom Craddick. And because of that, she has also drawn a challenger, 27-year-old lawyer Brian Thompson, who moved to Austin in 2002 and the Eastside in 2006. Dukes has steadfastly insisted that her votes to keep Craddick in the speakership – votes that have to some degree thwarted bipartisan hopes of removing the autocratic Midland Republican from power – were necessary for precious committee assignments (most notably, Appropriations) and the advancement of bills benefiting her constituents.

"I believe that our leaders have an obligation to lead with a set of principles that cannot be sold to the highest bidder and that cannot be exchanged for committee memberships," Thomp­son told the crowd to loud applause. When Dukes took the stage, the Capital City Young Democrats asked if she would pledge not to vote for Craddick next year. "I will look at every person who is running for speaker of the House and make a decision in 2009 based on who will do the best job to help me represent the people of District 46. If the Democrats take over the House, that will be a Democrat." She also delivered impassioned speeches reminding Democrats that back in 2003, she was one of the Ardmore 51, who broke quorum to try to stop Republican re-redistricting, and about how she worries about her constituents' struggles for good schools and against garbage landfills.

The endorsers were not impressed – five of the six groups voting that night went for Thompson; the Austin Tejano Democrats did not endorse in the District 46 race. (Ultimately, it may not matter heavily: None of the five clubs is specifically African-American or even Eastside in orientation.)

Similar spats took place in races for Travis Co. Precinct 3 commissioner and constable and the 353rd and 427th District Court races. Incumbent Precinct 3 Constable Richard McCain charged that challenger Robert Eller is a closet Republican who took campaign money from former state rep and current Craddick parliamentarian Terry Keel (Eller's current campaign finance reports do not show any contributions from Keel). "If he wants to be a Democrat, we welcome him back over, but don't run against incumbents." Eller, a 22-year county employee, admitted that in 2000 he worked for a Repub­lican friend's constable campaign but denied that he's a Keel crony and said he has "voted for the people who were best for the job. ... I may be naive in the workings of politics, but I'm not naive on the workings of the constable's office."

Scott Ozmun, 353rd District Court candidate, pointed out that his opponent, Madeleine Connor, ran for the 299th District Court as a Republican (Connor did not attend the forum). And apparently no sin was too old: Another fight flared when 427th Court candidate Karyl Anderson Krug was asked why she voted in the Republican primary in 1998. She said she couldn't remember for certain, but perhaps it was to vote for then-Republican Judge Julie Kocurek (who has since turned Dem). When someone yelled that Kocur­ek didn't take the bench until 2000, Krug replied, "That is Mr. [Jim] Coronado's campaign operative, so thank you for that, and by the way, Mr. Coronado is not really a judge, but we won't go into that." "Please do!" the audience member yelled. Krug angrily fired back, "Oh, I'd love to!" but the moderator cut off the exchange. (Coronado, the Travis Co. Criminal District Court magistrate, bills himself as "Judge Jim Coronado" in campaign literature – possibly skirting judicial ethics standards.)

The loyalty question might have counted for something in those races – neither Eller, Con­nor, nor Krug picked up a single endorsement.

Precinct 3 commissioner candidate Karen Huber, vying to take on GOP incumbent Gerald Daugherty, was apparently more convincing. Opponent Albert Gonzales attacked her for being a lifelong Republican until this election, but Huber described herself as a "zealot convert" who had been raised in a Republican family. "I just thought I was Republican," she said. As she began to get involved in political issues, "I began to realize my core values were Democratic." Huber is running as an environmentalist devoted to protecting the Hill Coun­try – in recent years she's been quite visible in those battles – and she got the nod from the Texas Environmental Democrats and the Capital Area Asian American Democrats, while Gonzales was favored by the Austin Tejano Democrats and Southwest Austin Democrats (of which he is the president).

Now comes the drive to primary day: Endorsements, name ID, and money will all clash. The results in many races are anything but predetermined.

In the constable race for Precinct 1, Willie Joe Madison racked up more endorsements Wednesday evening, but Danny Thomas has bigger name ID as a former Austin City Council member. (Janie Serna is also on the ballot.) For Precinct 2, Adan Ballesteros easily took more endorsements over Paul Labuda, but Ballesteros reportedly had a troubled employment history with the Department of Public Safety – ending in a lawsuit – so that may shadow his campaign. For Travis Co. Democratic Party chair, Andy Brown gives a better speech, but Fidel Acevedo won the endorsement of the very active Southwest Austin Democrats.*

And then there are the highest-pro-file races:

It would appear that the Congressional District 10 race is breaking toward Dan Grant – at least to observers in Travis County, which has the strongest influence in the Democratic primary. But without any news organizations taking polls, it's hard to determine how the money, celebrity, and Houston connections of trial lawyer and former Texas Justice TV star Larry Joe Doherty are playing at the other end of the district. Dems of every stripe – urban, suburban, and rural – will have to decide which of the two is more electable against the cash and incumbency of Republican Michael McCaul.

The next Travis Co. district attorney will be determined on March 4 – since there's no Republican entrant – but who will it be? Gary Cobb and Rick Reed would seem to have an uphill struggle against the cash and political experience of Mindy Montford – but Montford will have to fight against what might be the biggest hammer of all, the endorsement of retiring DA Ronnie Earle for Rosemary Lehmberg.

Realistically, the tax assessor-collector race will be decided on that date, too, as conventional wisdom doesn't give Republican Don Zimmerman a chance. But just getting to March 4 has already turned into a bloodbath, as Glen Maxey's challenge to 16-year incumbent Nelda Wells Spears has caused a huge rift in the county party, with the loyalists that Maxey built up during his 12-year tenure as a state representative arguing that the office needs revitalization, while others (most notably, former tax assessor and county Judge Bill Aleshire) stand by an incumbent who has been successful by most measures of the office. Minority issues are no small factor: In addition to lawmaking success, Maxey will forever be remembered as Texas' first openly gay legislator, while those standing by Spears are appalled at the thought of turning out a black female incumbent.

Get ready: February is gonna be intense.