Can Austin Waste Not? 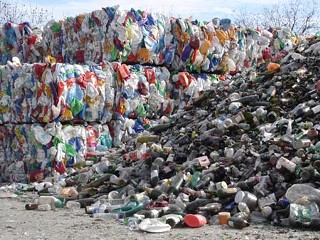 George Carlin once joked that the only reason human beings were given the ability to spawn was that the earth couldn't produce plastic on its own. Now that plastic is here to stay (and after we've helpfully crammed tons of it into landfills and spread layers of it everywhere else), we humans – call us homo petroleum byproductus – can be phased out. Mother Earth, Carlin mockingly argued, has managed to save herself quite well, for more than 4 billion years. The bitter truth is: "The planet is fine; the people are fucked."

Regardless of the level of individual enthusiasm about recycling, you're no longer likely to find anyone arguing in favor of burying valuable reusable materials – plastic, metal, paper, etc. – in landfills, whence they can never be retrieved. The city of Austin just paid considerable lip service to this idea, with its recently declared goals of reducing waste by 20% in four years, and achieving "zero waste" by 2040. So, with a population as earnestly and volubly green as Austin's, is the city really doing enough to promote the practice of recycling and composting? A growing number of local waste experts say no – and they say the reason Austin lags behind similarly progressive cities is, bluntly, a lack of municipal leadership. What's more, local activists say, city officials and business leaders are literally throwing away opportunities to create what could be a golden, green-collar niche market in Austin, based on practices like broadened construction and demolition recycling.

Most glaringly absent from the recycling picture is any serious progress in providing recycling options to apartment residents and Downtown dwellers. Downtown garbage collection is outsourced to a private company, and only paper recycling Dumpsters are picked up in Downtown alleys (glass is being phased in this year). No metals or plastics are collected, and there is no residential service. Outside of Downtown, waste handling is also outsourced for apartment complexes larger than four units, and city law requires only apartments with more than 100 units to provide recycling. Citywide, that means recycling opportunities are practically nonexistent at midsized and smaller complexes. Activists say that even at large, 100-plus-unit complexes recycling is rare, and enforcement of the city's Recycling Ordinance (requiring collection of at least four recyclables) is absent.

According to the city's Solid Waste Services Department, apartment management is required to submit a waste plan, and enforcement is done on a complaint basis. Asked for recycling stats, staffers said the department has none. Asked what options are afforded residents and businesses without recycling, city reps pointed to the Ecology Action drop-off recycling center at Ninth Street and I-35, which receives support from the city to be there for citizens and businesses willing to haul in their own recyclables.

Meanwhile, the city isn't exactly blazing new trails on the recycling front. Austin and Travis County are waist-deep in a dump feud over the proposed expansion of BFI Waste Systems Inc.'s Sunset Farms Landfill in Northeast Austin. In May, the City Council passed a resolution vowing to fight BFI's expansion application, currently under review at the industry-friendly Texas Commission on Environmental Quality. (See "Dumped by County," Nov. 16, 2007.) Symbolic actions have their uses, but local officials say they also understand the need to ratchet up their current zero-waste mantra with proper funding and commitment – especially if they hope to succeed in closing problem landfills and avoiding future dump-expansion fights.

Toward that end, the city has hired California-based consulting firm Gary Liss & Associates to spend the next four months developing a plan to help Austin achieve its goal of sending "zero waste" – or as close to zero as possible – to landfills by 2040. The 2040 mark follows the international standard crafted by the United Nations environmental accord. Austin's first step calls for a 20% cut in the amount of garbage going to landfills by 2012. I last reported on the city's zero-waste intentions in October 2005; that means that with the recent hiring, the city is only two years behind on its promise to retain a consultant.

Solid Waste Services Director Willie Rhodes admits the department has "stumbled a few steps" in getting its zero-waste program off the ground. Gerry Acuña, chairman of the city's Solid Waste Advisory Commission, said coaxing zero-waste progress out of the city has been "very challenging" because of departmental bureaucracy. Robin Schneider of Texas Cam­paign for the Environment said a task force convened to advance the zero-waste plan "didn't get sufficient support from city staff." Now that wheels are in motion, though, Coun­cil Member Lee Leffingwell, who co-authored the resolution opposing BFI's expansion, wants to see composting added to the city's recycling program. "To get to zero waste," he said, "composting has to be part of the solution."

Organic matter such as veggie scraps, soiled paper towels, and coffee grounds and filters account for 12% of the waste stream and give garbage its raunchy smell, but these materials easily break down into top-notch soil. San Francisco collects compost, reprocesses it into nutrient-rich dirt, and sells it back to locals as gardening soil. Since 1989, Austin has used collected yard trimmings and sewage sludge to make Dillo Dirt, a popular soil product. Seattle accepts both yard waste and household compostables, giving citizens three bins: one for garbage, one for recyclables, and one for yard waste and compost. Portland, Oregon, collects yard waste and picks up compost from businesses and restaurants. Here in Austin, Solid Waste Services encourages home composting and offers instructional materials on its website but currently has no plans to begin accepting compost from residents or businesses (see "The Dirt on Composting").

Although the city has a fairly comprehensive array of recycling, brush composting, and hazardous-waste disposal options, the city's overall waste-diversion efforts fall short of many cities with less ballyhooed green egos. Moreover, Austin's waste-diversion rate has actually been declining since 2003 and is now in the 27% range – while, according to a February 2007 Waste News report, the city of San Francisco diverts more than 60% of its waste from landfills, and Chicago 55%.

Specifically, Solid Waste Services has been slow to roll out its long-awaited single-stream recycling program, set to move beyond its 5,000-home pilot program and go citywide by the end of 2008. The move will broaden the fairly limited range of items collected at most residential curbs, including additional kinds of plastic and cardboard boxes, and will let residents combine all their recyclables in new 60-gallon carts. Austin now only accepts Nos. 1 and 2 plastics, while many other cities recycle Nos. 1 through 7; only corrugated-cardboard box material is recycled, while pressed-cardboard cereal and shoe-type boxes end up in the landfill. These items will be included in the upcoming single-stream recycling program, expected to raise the recycling rate by 40%. The expansion, local waste watchers say, is long overdue. (See "At Your Solid Waste Service.")

Collecting recyclables is not a cut-and-dried issue, Rhodes explains, particularly considering the mountains and variety of packaging materials that go into the receptacles. The city must find buyers for all the recyclables it collects, he said, and he notes the difficulty of keeping trash – the stuff that belongs in landfills – from contaminating recycling receptacles, especially the ones Downtown. American manufacturers could learn a thing or two about packaging from European countries, Rhodes said, adding that stricter packaging laws are badly needed in the U.S.

Raising garbage-collection fees could also generate more enthusiasm about recycling. "With a few modest changes, Austin's recycling rate could easily be doubled," said Neil Seldman, president of national nonprofit the Institute for Local Self-Reliance. He points out that Austin's trash-collection fees are among the lowest in the country and that although the city has a "pay as you throw" system – charging residents ascending rates based on the size of their trash carts – Seldman believes those rate differences should be much greater. Leffingwell concurs, adding that the city must also fully enforce its rule against picking up overstuffed trash cans.

Schneider is calling for new leadership in the city's Solid Waste Services Department and argues that waste diversion should be a more integral part of the city's new Climate Protection Plan, which is considering a raft of new technologies to help make Austin one of the greenest cities in the country. She also pointed to a recent study commissioned by the Capital Area Council of Governments that identified great opportunities for recycling construction materials like gypsum dry wall, concrete, and untreated wood. What's more, she said, construction and demolition recycling are identified in a recent Pathways out of Poverty project as prime sources for new, well-paying trades. "It matches the needs of low-income folks with the needs of the planet," Schneider says.

Ultimately, the solution to Austin's rubbish predicament will depend on the people involved. How quickly and effectively can the city's zero-waste consultant propose workable trash-minimizing tactics? How actively will the city's leaders enact the proposed reforms? Most importantly, can we count on the current Solid Waste Services Department to execute the waste diversion transformations that could eventually deliver us to zero waste?

Individual citizens and consumers can also play a central role, by choosing goods with minimal packaging, avoiding disposable products, and recycling and composting what they can. All but forgotten in all the local planet-saving hoopla are two simple words: Waste nothing.