First Night: A Work in Progress Artist Rebecca Ward’s Roll-On/Roll Off installation at the CSC Garage was one of the featured artworks at this year’s First Night.

First Night Austin, in its third incarnation on New Year's Eve, continues to evolve as a showcase for a broad cross section of Aus­tin's cultural-arts community. The event is striking in its proportions: Across its nine hours, it showcased site-specific work of 63 Austin artists in a footprint that encompassed City Hall and the buildings around it, as well as Congress Avenue and Auditorium Shores.

Artist Rebecca Ward's Roll-On/Roll Off installation at the Computer Sciences Corp. Garage was one of the more striking installations. 3M provided $21,000 worth of colored vinyl, which Ward, atop a cherry-picker crane, wrapped, dropped, and stretched from the ceiling to the loading dock to the beams of the garage, creating a mazelike structure.

This is not the kind of art intended for an audience with some kind of obscure background in the arts, said production coordinator Elysia Van Deusen. "This is intended for an artist to create work that the audience might not otherwise see," she said. "It's a way to reach out and be able to make the arts visible in Austin in a way that is fun and suitable for children. This isn't esoteric works for people who have a background in art. These are artists who create something fun that people can enjoy."

So while the evening included the work of artists like Ward, it also included an 8-foot-tall black-eyed pea, Asylum Street Spankers, and an installation of 1,000 suspended flashlights by Legge Lewis Legge called Ultimate Pulse. During the late evening, musicians Steve Bernal and Loren Dent performed the commissioned work "Dreams and Concrete" in the City Hall lobby. The work, a combination of cello and electronic music, was inspired by City Hall.

First Night celebrations began in Boston in 1976 as the culmination of the city's bicen­ten­nial celebration. Today, more than 100 cities host the family-friendly alcohol-free event. Interim Executive Director Patricia Paredes said Austin's event is unique in the fact that it is essentially a cultural-arts present given to Austinites. "We're one of the few cities that offers this as a free gift to the community," Paredes said. "There's no charge for admittance to the event. It's our goal to create a family-friendly idealistic gift to Austin, because we are an artistic community, and we have a lot of emerging and established artists who want to give something back." 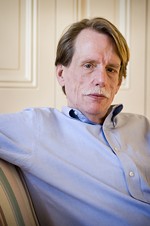