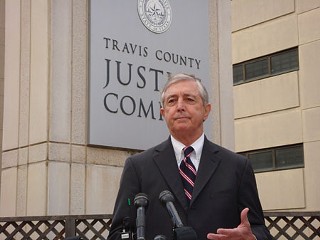 Retiring District Attorney Ronnie Earle announces his support for his chief assistant, Rosemary Lehmberg, in the election to replace him. (Photo by John Ormberget)

Saying he is "pleased and proud" his office has "produced so many fine candidates," Travis Co. District Attorney Ronnie Earle announced Jan. 7 that he is endorsing his longtime first assistant, Rosemary Lehmberg, as the candidate to replace him as the county's top law enforcer. Amid a gaggle of reporters and photographers, courthouse regulars, and other candidates for local (and national) office, Earle said he believes Lehmberg, who has been his right-hand woman for a decade, is the single most qualified person to take over the post he's held since 1977. Lehmberg has "risen" to top leadership in the DA's office "precisely because of her leadership qualities," he said. She "brings people together" and "ensures an open discussion and debate in the spirit of seeing that justice is done," he said, adding that Lehmberg has played a "greater role in the success of the Travis County DA's office than any other single person."

In all, four assistant DAs from Earle's office – Lehmberg, Gary Cobb, Rick Reed, and Mindy Montford – have filed as Democrats to run for the post. (Since no Republican candidates filed to run for the spot, the winner of the March Dem primary race will be the presumptive winner of the November general election.) All are fine candidates, Earle acknowledged – "We don't have anything but good lawyers and good people," he said – but in the end he believes electing Lehmberg to the post "would ... best serve the interests of the community." During her 31-year tenure with the DA's office, Lehmberg has overseen each of the office's major divisions – including service as chief of the trial division, the public integrity unit, and as the first head of the family justice division.

Surprisingly, Lehmberg herself was not present at the midmorning press conference outside the courthouse. She said she was out doing "other campaign activities" but that she's "really happy" and "really honored" to have Earle's endorsement. In the universe of Travis Co. Dem pols, Earle is, arguably, the rock star – the local pol with a national reputation and statewide influence – so Lehmberg missed a perfect opportunity to be anointed by the one person whose endorsement likely will count most in the race. Lehmberg said it was "Ronnie's press conference" and not hers. With other appointments to keep, she said, "There was never any question that I should be there."

Earle did not say whether he would actively campaign on Lehmberg's behalf but said he is certain the four candidates for his job will engage in a lively debate on the issues and will avoid personal attacks: They'll campaign "in the spirit of respect for democracy and the rule of law," he said. "I think that will be characteristic of [this] campaign."