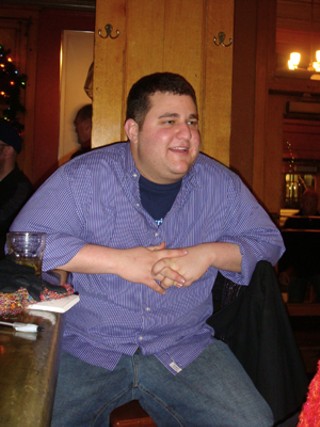 In 2004, Mason Tvert graduated from the University of Richmond and was looking for a job. The 25-year-old Arizona native wanted to work in public policy but had no idea where he'd end up working – and he certainly didn't imagine that less than a year later he'd be front-and-center in the burgeoning alcohol-marijuana equalization movement, striving to change public attitude regarding responsible marijuana use by adults and working to decriminalize private pot use by adults – bringing pot-use penalties in line with those associated with alcohol use. But that's exactly where he is. As executive director for the Denver-based group Safer Alternative for Enjoyable Recreation, Tvert has blazed a trail through Colorado – directing successful equalization initiatives at the University of Colorado in Boulder, Colo., and at Colorado State University (parity policies have now passed at a handful of other schools, including the University of Texas); spearheading two successful initiatives in Denver, in 2006 making possession of up to 1 ounce of pot by adults legal and last year designating pot-law enforcement the city's lowest priority for police; and dogging a statewide equalization initiative in 2006 that – despite gruff opposition (including from the feds), earned an impressive 41% of the vote. Last month, Reefer Madness caught up with Tvert in Denver for a drink (at the Wynkoop Brewing Co., founded by Denver Mayor John Hickenlooper – with whom Tvert and his colleagues have had their "moments") and a chat about SAFER's successes and the meaning of pot-law parity.

Reefer Madness: How did you become involved in pot-policy work?

Mason Tvert: [After graduation] I was trying to get a job going in D.C. I applied for everything from Planned Parenthood to different policy think tanks to the Marijuana Policy Project. [MPP] said, "I see you're from Arizona, so do you want to go out there?" I said, "Sure, you paying for it?" It was the last couple [of] weeks [before] the Republican primary in the Glendale/Phoenix area, [and I went there to do] work [related to] the [federal] Hinchey-Rohrabacher [medical-marijuana] amendment. Then they hired me to go up to Flagstaff, [Ariz.,] to work on a congressional seat up there during the general election. [After that,] with a couple of people from MPP, I started on this.

RM: How did that come about?

MT: Steve Fox was the director of government relations at MPP. He hired me on to do the Arizona work. He [and Aaron Houston, who took over Fox's job at MPP] always had the idea for this "SAFER" stuff. Steve, primarily, was interested in the message that marijuana is safer than alcohol. My personal experience told me this was true.

RM: What was your experience?

MT: What started it all was that in high school I was a borderline alcoholic – I was drinking too much; I [once] had gotten alcohol poisoning and had to have my stomach pumped.

I've done a lot of drinking since then – I pledged a fraternity in college – [but I never got in trouble for, or was warned about drinking]. They tell you, "Don't do drugs!" And they tell you some, "Don't drink and drive," but they don't tell you a lot of that.

[Then, in college,] I was subject to a multijurisdictional grand jury related to marijuana use – not even pot sales or distribution but the culture of pot. They said, "We heard you use marijuana." Richmond is the midpoint of I-95 between Miami and New York, and someone must've been busted [moving pot up the corridor]. As I was finishing up finals ... for the year, they called me in: They asked me, "Who do you use marijuana with?" I said, "All the other guys you've called in here." "Where do you get it?" [they asked.] I said, "I don't know, some guy downtown named Bird." "Where do you use it?" "My dorm room." "Where else?" [they asked.] I had some friends who were seniors and moving out, so I said I used it at their place.

MT: I thought it was crazy. It is obvious to any rational person that it doesn't make any sense: There's a ridiculous amount of drinking going on, and they don't ask anything about that. [But] if they even think that you smoke marijuana, then everyone from the campus police on up to the federal government is interested.

Drug education is based on penalties, not on [information about or risks associated with use of the] drug itself. Many people I know didn't use marijuana [only] because of the consequences. They drank because they knew they wouldn't get in any trouble.

RM: So how did you end up in Colorado with SAFER?

MT: [Aaron Houston] was very active [in Colorado], and he'd developed a plan to go to CU and CSU [with the goal of passing alcohol-marijuana equalization measures]. So he hired me to come along, and MPP gave us a half-grant to see if it would be successful.

RM: And you were – both measures passed. Were you pleased?

MT: More or less. There were still more than 1,000 CU ... students that said, "No, we should keep marijuana [penalties] worse than alcohol" – and that's sort of scary. Some 4,000 said yes, but still, it just goes to show why there's a need for this [movement]. I'm not gay, but I vote for laws to make things more fair for gay people; I've never had an abortion, nor have I had a girlfriend who's had an abortion, but I still vote for the right for a woman to choose [her reproductive future]. [So] why is it that when it comes to marijuana, we create these stereotypes? That [marijuana use] is only about hippies or rebellious counterculture? That's what we're trying to change. It is a recreational drug that responsible adults use. That's the problem for me and for this movement – the rhetoric that [pot use] is ... bad. The argument has been, "This is a bad thing, but [policing pot] is a waste of law-enforcement resources." This is what needs to change: Pot is not so bad – it is less harmful than alcohol – and that's why the law needs to change.

RM: With success at CU and CSU, you moved on to Denver. How did that happen?

MT: It was go to other colleges or go municipal, to Denver – basically it was go broad or deep. If you do it citywide, [we thought] it probably wouldn't pass, but it would get a lot of attention if we did a good job. But Denver is just a pretty good city, [and it passed first time out].

RM: But not everyone was pleased, I guess, including Mayor Hickenlooper?

MT: He certainly likes to talk this whole progressive game, but he's not [progressive] when it comes to this issue. [He says there are] more important issues, and he cares about those issues.

RM: That may be, but then why would he even mention being opposed to it? It seems to me he made it a bigger deal by actually coming out against it.

MT: He said in the newspaper that he didn't support it ... [but] he didn't make a big deal out of it; we did. Still, in January 2007, [we found that there were] more arrests in 2006 than in 2005. Hickenlooper was running for re-election, and so ... that's how "Chickenlooper" started: He was running and hiding from our questions [about how the initiative was being implemented].

RM: So at that point the initiative was really in name only?

MT: Yeah. So in May [2007], we launched the "lowest-priority" initiative [and were successful in getting voters to approve language directing the city to make adult pot-possession enforcement the lowest of policing priorities]. And, by the way, there's news [on this] today that will probably make the papers ... that Hickenlooper appointed the 11-member panel ... basically to study and review the issue – officially [under the new law] they're charged with implementing [the lowest-priority initiative] to the greatest extent possible.

RM: What would you like to see come out of that process?

MT: I'd like to see an official policy, like one adopted in Missoula, Montana, directing law enforcement – on paper – to make this their lowest priority. That'd be a good first step – for the police, that means no longer issuing any citation [to adults for minor possession]. [We want to] make sure that's going on; at this time, we definitely don't know that it is.

*This interview was written directly from Jordan Smith's contemporaneous notes of the conversation, with all editorial interpolations inserted in brackets [e.g., spelled-out names or titles, or explanatory information]. The article accurately represents the conversation, although in certain moments it may not be entirely verbatim.

**In this Jan. 11 "Reefer Madness" interview with Mason Tvert, director of the Colorado-based group Safer Alternatives for Enjoyable Recreation, we reported that Mason was hired by the Marijuana Policy Project's Aaron Houston to work on SAFER initiatives in Colorado. Tvert has since informed us that he was not hired by Aaron Houston.