Molly, Please Come Back, We Need You! 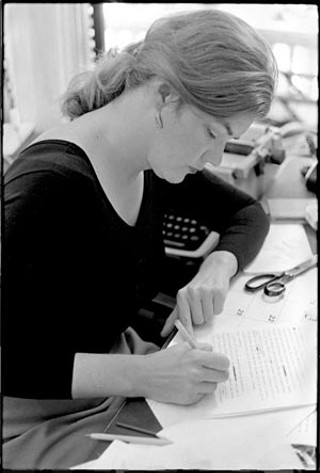 1) Tell 'Em How Much Fun It Was! No sooner had 2007 arrived than Molly Ivins left us, after a long, plucky fight with breast cancer. Her passing created a gaping news hole in hundreds of newspapers and periodicals that carried her witty, populist-driven commentaries. Few scribes can nail Texas politics the way Molly did, but we take to heart one of her most valuable lessons: "And when you get through kickin' ass and celebratin' the sheer joy of a good fight, be sure to tell those who come after how much fun it was!" For present example, look how much fun 2007 was ...

2) Craddick vs. the House No one rocks the House like Speaker Tom Craddick, who managed to fend off, by hook and crook, two attempted coups at the dramatic beginning and chaotic end of the 2007 legislative session. With all but a few of his lieutenants having bailed or been kicked out of his shrinking inner circle, Craddick not only faces a slew of challengers in 2009, but the Midland lifer has even drawn – oh insult too cruel! – a Democratic 2008 opponent.

3) Kids Behind Bars In the national embarrassment department, Texas had a stellar year. Along with a still-booming execution conveyor line, the Texas Youth Commission scandal brilliantly served to strengthen the Lone Star State's laughing-stock image. (There's also that little matter of the governor we cheerfully exported to D.C., but we're trying not to think about that.) After all the sordid horror stories coming out of the juvenile prisons, the Lege finally stepped in with headline-grabbing quotes but few resources, and judging from continuing reports, not much has changed – meaning "Kids Behind Bars" will likely serve as a headline for next year, too.

4) Don't Ask, Don't Vaccinate Politicians and pharmaceutical companies go together like ... drugs and money. Take Gov. Rick Perry. His surprise mandate requiring girls to be vaccinated against a sexually transmitted virus that can cause cervical cancer generated a passionate national debate – about sex. Moral conservatives yelped that Perry's executive order would promote prepubescent promiscuity. Democrats publicly hailed the order but privately questioned whether Perry was merely helping out his old pal Mike Toomey, the lobbyist for the vaccine's manufacturer, Merck. In the end, legislators overturned Perry's edict, and that was that.

5) Highway to Nowhere Perry's imperially ambitious but publicly reviled Trans-Texas Corridor project got its chain yanked, as lawmakers responded to citizen protests over the Texas Department of Transportation's brazen toll-road-building blitz (while still protecting toll projects in their hometowns). Now, it's hard to tell who's pulling whose drive chain, but TxDOT looks to be settling scores by messing with certain local road projects previously deemed safe. Local case in point, state Sen. Kirk Watson is blaring his horn over TxDOT's claim that it's short some $500 million needed to complete a long-planned CenTex road package, recalling the old Texas adage: All's fair in highways and politics.

6) TXU Sells Out After beginning the year with 11 dirty coal plants in the queue, the wholly unpopular TXU Corp. sold itself, took on a new name (Energy Future Holdings/Luminant), and green-washed its image with a slick ad campaign and a promise to slim down its proposed pollution portfolio from 11 plants to three (including, alas, the worst). Now Luminant is on deck to retrofit existing plants as part of its pledge to cut pollution 20%. How can the company possibly clean up its coal-fired act without leaving Texas in the dark? Read our 2008 lips: "Nuke-ular."

7) Let 'Em Study Cake Among Rick Perry's many ham-handed vetoes this summer was one that axed $154 million in health-care funding for Texas community-college employees, on inexplicable grounds concerning the way some of the funds were being paid. The veto touched off college budget crises all over the state and a wave of outrage among legislators and administrators who said Perry failed to raise his concerns during the session. The funding was eventually restored when Perry, Dewhurst, and Craddick (the Legislative Budget Board, aka the Oops! Brigade) agreed to make good. The political consensus was that Gov. Goodhair had unnecessarily plunged higher education into temporary financial chaos – but hey, 39% of voting Texans think he's doing just fine.

8) Anybody Know How to Work This Thing? The state's Children's Health Insurance Pro­gram was damn near nonfunctional by the time state officials finally owned up to their 2005 mistake and pulled the plug on a disastrous $899 million contract with the private outsourcing firm Accenture. The company had been hired to streamline and "improve" the administration of CHIP, but the bumbling experiment was cursed by a whole series of failures, from computer snafus to poor training of workers (replacing the more experienced pink-slipped employees) to lost paperwork to – worst of all and inevitably – a dramatic drop in the number of children receiving health benefits.

9) Drop Dead – We Close at 5 That Sharon Keller – what a charmer. The clock-watching chief justice of the Texas Court of Criminal Appeals barred the courthouse door to defense attorneys trying to file a last-minute appeal that would have spared the life of convicted killer and death row inmate Michael Richard. "We close at 5," was Keller's ho-hum explanation – four words that guaranteed Richard's pending execution. Never mind that the Supreme Court had just opened doors for similar appeals across the country over the constitutionality of lethal injections – that's why it's called a deadline.

10) You Celebrate Xmas Your Way, and I'll Celebrate Xmas My Way Granny, get your gun! Land Commissioner Jerry Patterson just can't fathom the idea that any red-blooded Texan might visit a park without packing a firearm. So he's defying the original land donor's wishes in a rush to market the state-owned Christmas Mountains to private (i.e., pro-gun) interests, while digging in his heels against any sale to the National Park Service, which would ban firearms and hunting. "Public" is the operative word here, but Patterson insists the gun factor is a deal breaker. No guns, no hunting, no sale – or, reach for the sky, tree-hugger.