Local effort to get rid of plastic bags growing 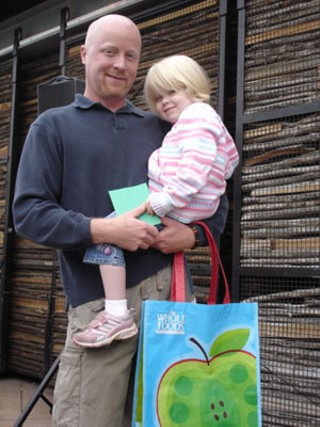 Trying to get out of a store these days without a plastic bag is like trying to leave Grand­ma's house as a kid without getting a kiss. It's nearly impossible, and you often receive more than one without giving your consent. But lots of locals are working to change that, motivated by the blight plastic bags cause as litter, their tendency to cause floods by clogging sewers and to scourge wildlife, not to mention their petroleum composition and the fact that they take a millennium to decompose. First came the local Bag the Bags Coali­tion push for a City Council-enacted ban on plastic bags at large grocery stores and pharmacies. Then last week, Austin-based Whole Foods Market made headlines by announcing the elimination of plastic bags at its two metro stores as part of a new educational outreach campaign – led by local nonprofit Keep Aus­tin Beautiful in association with the city's Solid Waste Services Depart­ment and the Texas Retailers Association – intended to popularize reusable bags and raise awareness about plastic-bag recycling.

For the time being, an Austin plastic-bag ban seems to be off the table. Solid Waste Services staffer Melissa Martinez said the aforementioned stakeholder groups have agreed to compile baseline data detailing how many bags are used and recycled locally. With data in hand, they'll give the public outreach campaign one year and then evaluate its results. City Council Member Lee Leffing­well, who co-sponsored an April resolution calling for ways to limit plastic bags used locally, said he'd like to see a 50% reduction in plastic-bag use or "significant and measurable progress."

Nationwide, plastic-bag recycling rates are estimated to be as low as 0.6%, with as many as 100 billion bags ending up in landfills each year. Making the bags consumes about 430 million barrels of oil annually, and littered bags are blamed for the death of more than a million birds and 100,000 mammals and turtles each year. Based on estimates by the city of San Francisco – which officially banned plastic bags last month – each bag represents a 17-cent local expense for cleanup, disposal, and lost recycling revenue.

Leffingwell commended Whole Foods' announcement, saying, "We don't always need a new ordinance or a new bureaucracy to achieve a critical environmental goal." He said their decision should "encourage all merchants in Austin to take dramatic steps to reduce plastic-bag use." As part of Whole Foods' effort, the company will double a 5-cent rebate already given to customers who bring their own bags and allow patrons to donate that sum (which they'll match) to Keep Austin Beautiful. Whole Foods now also offers 99-cent reusable "better bags" made from 80% post-consumer recycled bottles and brown paper sacks made from 100% recycled content.

Rick Cofer heads up the Bag the Bags Coalition, the main advocates of a local plastic-bag ban. He stressed the importance of measurable standards for reducing bag use and said, "It's my expectation that we probably won't see the type of results most people desire with a voluntary program," at which point a ban will be more of an option.

"Bans never make sense," said Donna Dempsey, managing director of the Progres­sive Bag Alliance, which represents bag manufacturers. The alternative they force – the use of more paper bags, which she says require more energy and water to produce – outweighs a ban's eco-benefits. She said the alliance supports the mandatory recycling efforts proposed in New York City, where stores more than 5,000 square feet in size must offer plastic-bag recycling, in addition to training workers not to use excessive bags, ensuring reusable bags are displayed at checkouts, and raising awareness about recycling at stores.

According to a September study for the Cap­ital Area Council of Governments, most plastic bags recycled in Texas are actually down-cycled – combined with sawdust and transformed into Trex, a decking product. The report also recommended a local recycling ordinance similar to New York's and said cities should consider including plastic bags in curbside and drop-off recycling programs. The city of Austin doesn't recycle plastic bags.

Keep Austin Beautiful Executive Director Brian Block said, "One of the goals of our program is to create a cultural shift in Austin toward much more widespread use of reusable bags." As for recycling, Leffingwell said, "We're putting the ball in the retailer's court." You can drop off stockpiles of plastic grocery and newspaper bags, as well as dry-cleaning bags and shrink wrap, in receptacles in front of local Whole Foods, HEB, Wal-Mart, and Randalls stores. For more info, see www.bagthebags.com, www.keepaustinbeautiful.org, and/or www.progressivebagalliance.com.